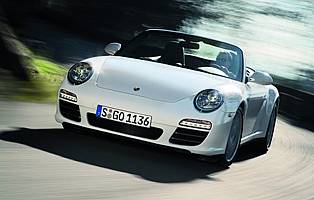 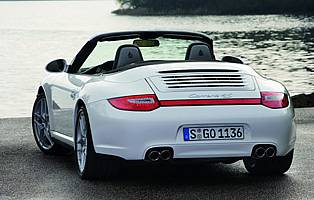 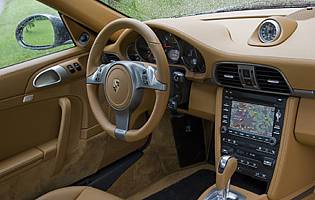 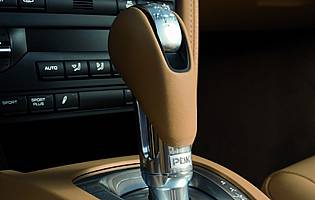 No 911 range would be complete without a handful of bodystyle variants, and alongside the updated coupe and Targa models comes the 911 Cabriolet. Often seen as the most luxurious 911 variant, the Cabriolet trades a fraction of sharpness and rigidity for the sensation of fresh air and also more audible excitement from the impressive range of flat-six engines.

Already an exceptional performance car, the updated 997 moves the game on further with an increased focus on efficiency. In 3.8-litre form, Porsche's flat-six engines benefits from direct fuel injection - boasting responsiveness, economy and reduced emissions. The end result is slight reduction in the unit's charismatic metallic idling sound, but the overall gains can't be ignored.

In 'S' form when powered by the 3.8-litre engine, the 911 proves to be a seriously rapid performance car. Increases in track and revisions to suspension settings have resulted in an increasingly mature experience. The smaller, cheaper Cayman now fills the gap left by previous generation entry-level 911s.

There's nothing entry-level about the Cabriolet variant, though. Priced above the coupe and Targa models, the folding fabric roof is neatly integrated into what remains an unusual shape but, despite this, with the roof up the 911 maintains its trademark profile. With the roof down, the folding mechanism stows neatly around the rear of the car echoing the tail-heavy shape and doing nothing to spoil its looks.

The rest of the design is much as before, although detail changes do keep the 911 looking fresh. LED running lights complement the tidied nose design and, compared side-by-side with the earlier 997, the new car looks that little bit sleeker and more up to date. The same can be said for the cabin, which feels as robust and well-designed as ever.

Our verdict on the Porsche 911 Cabriolet C4S PDK

Choosing the Cabriolet over other 911 variants suggests that the owner puts the driving experience lower down on the priority list, but the performance and handling suggests otherwise. Enormously capable and a pleasure to drive, the 911 Cabriolet makes very few sacrifices for its open roof and it delivers the full-on Porsche experience for those who have the means.

Running costs are inevitably high, although improvements in engine efficiency mean that with restrained driving respectable levels of economy are possible.

With the rear seats in any 911 merely a token addition, front seat occupants shouldn't have any complaints about the available space in the cabin. Oddment storage - open and covered - is in good supply, though luggage space is restricted to the modest front compartment unless you call the rear seats into use.

Consistency is the key to the 911's cabin. The car retains the now familiar five-dial set-up for the main instruments, supplemented by configurable digital display for the trip computer, audio status and supplementary speed display - useful to glance at quickly. Secondary controls at the base of the central fascia are less impressive thanks to their small size. On a positive note, the colour touchscreen display is clear, easy to read and intuitive from the off.

It's all relative with a car like the 911, but it does a good job of delivering respectable comfort levels despite riding on large wheels and offing a near-absence of roll when cornering at speed. The sports seats are firm yet supportive - even over long distances. Overall noise levels are quite restrained when on a light throttle opening.

The standard alarm and immobiliser system should be considered a minimum in a car such as this. With the relative vulnerability of the fabric roof and its desirability, a tracking system would be a worthwhile investment.

For a car as potent as the 911 - especially in 3.8 S specification - there's no shortage of safety kit. From stability control to numerous airbags, you're covered for most eventualities. The Cabriolet is only available with four-wheel drive, further enhancing its all-weather capabilities.

This is where the 911 shines - even the Cabriolet variant. Continual improvements have led to more power for both engine options and the practical experience bears this out. The 3.8 is particularly impressive, responsive and tuneful at all speeds. The standard fit manual gearbox does a good job but is overshadowed by the excellent DSG-style PDK unit. Changes are super-smooth, seventh gear contributes to above average fuel economy and there's a (slightly counter intuitive) manual override. Factor in well judged stability control and the possibility of adaptive damping and you can't go wrong with a 911.

At a push, the 911 Cabriolet could ferry two adults and two children of the right size on short journeys, but there would be little room for luggage and not much chance of covering a decent distance before the rear-seat occupants will start to complain.

The 911 in any form is not a suitable car for first timers, given its unusual layout, dynamics and even simple things like the reduced visibility and heavy clutch.

Porsche has always been something of a divisive brand but for those who really appreciate highly capable sports cars, Porsche products and the 911 in particular are regarded as some of the best in the business. Quality has always been a strong feature of Porsche cars and the latest generation 997 is no different.

Once you're aware of the 911's limitations the act of getting in and out is rarely a challenge. With the 911 being low to the ground, so is the seating position. The car's doors are big, but that's only an issue when parked in a tight space next to other vehicles.

With such a premium car you can expect a suitably premium sound system as standard. The radio and CD combo is easy to use, sounds good and can be upgraded to include MP3 and iPod connections, Bluetooth phone interface and an excellent touch-screen sat-nav system.

Although the 911 is available in a wide range of exterior colours the Cabriolet looks better in more sober colours. Matching the choice of hood colour with the paint is also worth careful consideration. Inside there's plenty of scope for mixing and matching trim materials and colours to suit.

When sitting low down in any 911, parking can be a little tricky at first. It's a wide car and it wouldn't be good to kerb those nice alloy wheels. Fortunately the car's steering is light and accurate at low speeds and, where fitted, the parking sensors make a big difference. With the hood folded rear vision is restricted.