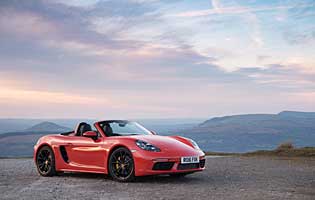 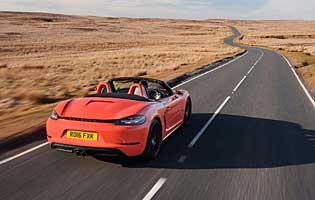 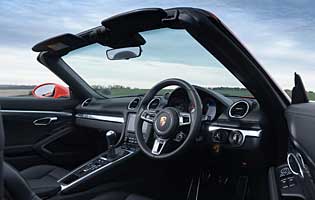 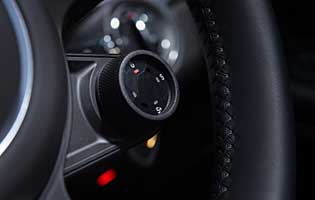 Following in the footsteps of the latest 911, the Boxster has swapped normal aspiration for turbocharging, but in this case it also loses a pair of cylinders. The all-new four-cylinder turbocharged engines, in two capacities, are still horizontally-opposed in design, but offer far more torque than before – in exchange for the loss of the fabulous six-cylinder noise.

The early signs are that buyers are less keen to place an order than with past Boxster models, and the engine replacement is key. The old unit was so sharp and sounded so good that it became a critical part, in many people's eyes, of the identity and character of the car. The new engine, it's fair to say, is well down on personality.

It is, however, a very clever thing, with variable-vane turbo technology taken straight from the 911 Turbo and systems that keep the turbo spinning for longer when the driver steps off the accelerator, thus improving response when getting back on the power. The S, with appropriate options, is as fast as many current 911s. There's also a tangible improvement in fuel economy.

Most of the body panels are new, says Porsche, but you'd never notice. The most noticeable changes are the 718 badge, marking a departure from the pre-update car's 981, and the wide black strip between the rear light clusters. The chassis is mostly shared with the older car, albeit with some tweaks like a 10% faster steering response.

The S model comes as standard with the larger of the two new turbocharged engines, a 2.5-litre, which will also see service in the hard-top Cayman S. It is fitted with more equipment as standard and looks like good value when compared to adding options to the base model. It's likely to be the most popular version in the UK, where badge kudos matters more than it should.

Our verdict on the Porsche 718 Boxster S

The Boxster S can be viewed in two lights. On one hand it's the best-handling car in the segment, built to feel precise and responsive through the corners. It's unbeatable among its peers along a twisting, dry mountain road. However, the drop to four cylinders has changed its character fundamentally, and driving it no longer feels like the special experience it once did.

Depreciation will be the biggest cost and the 718 Boxster will lose money quickly. It remains to be seen whether the advent of this model will bolster used values for 981 models at the expense of the newer replacement's residuals. Fuel will cost less than on the previous Boxster, and insurance should also be slightly cheaper owing to the latest safety advances.

There are two storage bays in the Boxster, under the bonnet and behind the engine. The latter gets a little warm and is smaller, while the one at the front can hold a surprising amount of luggage, as long as bags are the right shape for the job. There are clearly limits to how practical a leather-trimmed two-seat sports car can be, though.

As per Porsche tradition the rev counter is the largest and most central dial, and for a price can be painted in one of several different colours including red and yellow. The centre console is crowded with buttons where plenty of optional extras have been specified, but is disappointingly full of blank switches on cars without all the upgrades. The main media screen does an impeccable job, though.

As ever, the ride is very good considering the limited amount of suspension travel on offer and the large alloy wheels. As standard the Boxster S wears 19-inch wheels but many buyers will upgrade to one of the 20-inch styles inherited directly from the current 911 range. The larger options inevitably introduce more harshness, but not as much as might be expected. Surprisingly, though, the cabin is not particularly long and taller drivers might feel cramped.

The thick fabric roof has multiple layers of sound-deadening material but is still more vulnerable to vandalism than a metal roof. All Porsches are desirable to thieves, too, which is why the company offers the installation of a tracking device for a fee. Buyers would be well-advised to take advantage.

Strong brakes and lots of grip from the tyres give reassuring handling and short stopping distances. Adaptive cruise control, lane change assist, speed limit display and emergency braking assist are all optional, although the latter is only offered with the automatic gearbox.

Exclude all aural input from the equation and the 718 Boxster is in key ways even better than the 981 that went before it. The quicker steering allows even more confidence in the chassis, the grip and the enormous ability to cover ground quickly. Throttle response is also extremely impressive, especially above 2,500rpm. But engine and exhaust noise are indispensable parts of a true sports car experience and the 718 falls flat on both counts.

Parents can optionally add an Isofix child seat mount to the passenger seat of the Boxster, but not with the aggressive bucket seats. Folding the roof down will make it easier to install the seat and the child, but despite the option it seems unlikely that the car will be used by many people to carry young children or babies.

The Boxster may for many buyers be a first Porsche, but its purchase price and high insurance grouping put it out of the reach of all but the wealthiest first-time buyer. Even with the money issues taken out of consideration, though, the powerful engine would make an unwise choice for anyone with little driving experience. Outward visibility is significantly worse than in typical learners' superminis, too, potentially inviting low-speed bumps through inexperience.

There is no such thing as a cheap Porsche when buying new, which gives the cars an aspirational image. The German brand is also very strong when it comes to technical excellence and handling dynamics, which will boost its reputation. However, losing the six-cylinder engine and the incredibly emotive noise that went with it could hurt the model's appeal hard. It's simply less exotic and less exciting a concept.

While the seats are low, final ease of access can depend on which type of seat is installed. The standard type is easy to slide over whereas the most aggressive bucket seat has taller, stiffer bolsters that can get in the way of access. The doors are long, too, which means they need lots of space into which to open. When the doors can't open very far, access is made difficult unless the roof is folded down.

The standard stereo is adequate but lacks most of the features many buyers will really want, like navigation and digital radio. Adding these is frustratingly expensive bearing in mind they are often standard on cars half the price. There are SD card slots, a USB port, CD/DVD drive and FM/AM radio reception. Audio quality can be boosted by either the pricey Bose surround-sound system or the extremely expensive Burmester High-End surround-sound option. TV reception can also be added.

Porsche is offering a huge spread of colours for the Boxster, from four flat shades at no extra cost to seven metallics and three specials, with four potential soft-top colour choices. The interior is equally as open to personalisation, with three different styles of seats, two of which can also be ordered with comprehensive multi-way electric adjustment. The aesthetics of each are first-rate, however, and likewise the cabin trim could not look much better.

Front and rear parking sensors are optional extras, which could be galling to buyers of a car that costs this much. Visibility isn't as bad as it might be, but you sit low and the height of the bodywork above the engine does restrict the view rearward. Sensors are a must-add. There is an optional steering system that reduces the effort required to turn the wheel at low speed.