Stylish 206 looks most attractive with the roof down 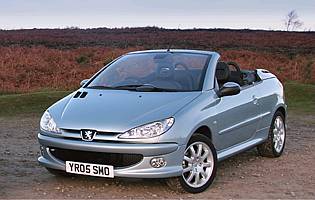 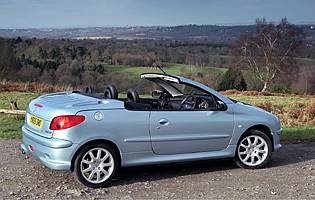 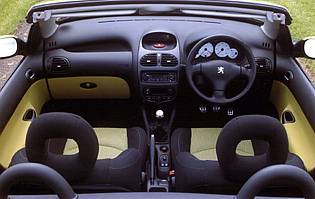 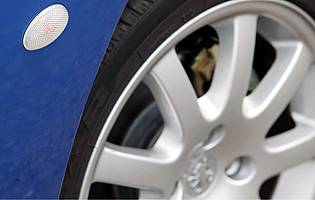 First amongst the booming market for small convertibles, the 206CC took the attractive shape of the three-door hatchback and created the first car in the segment with a metal folding roof. The addition of the popular 1.6-litre HDi diesel engine created another first in the segment, but does the mix of diesel and top-down motoring make a winning combination?

Few will complain about the 206CC's looks, at it remains recognisably a 206 even with the addition of a flat rear deck. The coupe looks are a large part of the cars appeal, but more so is the fact that it can be changed into a good-looking cabriolet in 20 seconds. Folding the roof is easy; two catches are released then a button held down. The windows automatically drop but do not raise the same way, which would be a helpful addition.

The downside to the clever roof and stylish exterior is the compromise in interior space. Shortening the cabin and extended the rear deck to accommodate the roof has reduced the rear seats to occasional items, as long journeys would become uncomfortable even for children. At the rear, the boot is a good size and shape unless the roof is folded, when it becomes narrow and more difficult to access.

Drivers expecting a lot of diesel noise with the roof down will be disappointed. The 206CC hides its oil-burning origins well, thanks to the refinement of the 1.6-litre HDi engine. Performance is also impressive; the CC is clearly heavier than the hatchback counterpart, but rarely is it caught short of power. Economy is also a strong point, which must make it one of the most fuel-efficient cabriolets available.

Elsewhere the CC retains much of the attributes that made the 206 such a success, including the respectable ride quality and good handling. The reduction in body stiffness does have an effect on the suspension, but the majority of drivers will find the car's all round ability sufficient most of the time.

In a competitive market, the 206CC has all the right ingredients to take on the opposition. The combination of style, performance and economy is ahead of the pack, and only the small boot and rear seats count against it. The high specification and low running costs also make it good value for money.

The 206CC in diesel form should be one of the most cost-effective convertibles available, thanks to a reasonable purchase price and strong economy. Servicing will be no more complex than with a hatchback model, so only the car's above average insurance grouping may cause damage to an owner's wallet.

Squeezing a folding metal roof into a car of this size does require compromises, and it is in terms of space and practicality that the 206CC is inferior to the conventional hatchback model. The boot is of a different shape thanks to the long tail bodyshape, but with the roof up and the partition open, it provides 410 litres of space. To allow the roof to fold, the partition must be pulled across and items can only be stored underneath it. This leaves a narrow aperture to a shallow load area, which can only hold 175 litres. Space is also compromised in the passenger area. The front seats are comfortable, but their width leaves the cabin feeling cramped, while rear seat passengers have very little legroom. Even so, two adults could enjoy plenty of room in the front with enough luggage room in the boot and on the rear seats for a long weekend.

Aluminium on the pedals and gearknob make them more pleasant to use, while the leather steering wheel provides good grip for the hands. The remaining controls are as with a regular 206; straightforward and easy to use. The instrument dials on the Allure model are attractively finished in black and chrome with white needles, yet remain easy to read, as does the trip computer and radio display in the centre of the dashboard.

Front seat passengers will have little trouble getting comfortable, although some drivers may find that the lack of steering reach adjustment makes the driving position a little uncomfortable over long distances. Rear seat passengers are less well catered for, as the rear seats are upright and short in both the backrest and the squab, and are only suitable for occasional use.

The use of a folding metal roof instead of a fabric version means the 206CC is as secure as the regular hatchback model. An alarm is also fitted as standard, which includes a button to deactivate the internal detection, allowing you to arm the system even with the roof folded down. Deadlocks are also standard, preventing thieves from reaching into the car and unlocking the door from the inside. The boot is also on a unique lock, preventing access to the boot without the key.

Additional safety equipment on the 206CC includes twin rear rollover hoops and increased strengthening in the windscreen and the floor, to compensate for the loss of rigidity incurred with the convertible roof. The Allure model also gets side airbags in addition to the twin front airbags on other CC models, plus ESP as standard, giving a useful extra boost in safety.

While removing the roof of the 206 has had an inevitable effect on the dynamics of the CC, it remains a fun car to drive. The diesel engine is lively without being too noisy, and the steering is relatively sharp. The suspension is quite firm, so on smoother roads this combination delivers good grip. On rougher roads the stiffness of the suspension leads to shake the bodyshell, most noticeable around the windscreen. Although this does not make the car unsafe in any way, it can be off-putting. Driven more sedately, the 206CC is quite comfortable, and even with the windows and roof down remains acceptably draught-free even at higher speeds.

The small rear seats hamper the 206CC's ability to function as a family car, as does the reduced boot volume. The front passenger seat has Isofix child seat mountings, though this would force any adults into the back seats. With the roof up, children in the rear may feel claustrophobic, although with the roof down they could enjoy the open-air experience to the full.

The 206CC has a lot going for it as a first time car. Its size and ease of driving would be advantageous to inexperienced drivers, and the low running costs would also help. Only the initial purchase price and insurance grouping may be off-putting.

Although the original 206 is one of the oldest cars in its class, the CC model has an extra dose of style, which gives it strong appeal amongst car buyers. The folding roof makes the most of its handsome shape and it succeeds in being desirable even against newer opposition. In terms of quality the 206CC stands up well. Although some elements appear a little dated, they still function well and feel as though they are constructed from decent materials.

This is one area where the 206CC struggles a little. With the roof up, front seat passengers can get comfortable with ease, but rear seat passengers have a small space to squeeze through to access the tiny rear seats. With the roof down however, the top of the windscreen pillar reaches a long way back, making it easy for a passenger to catch their head when entering the car.

Standard fit on the Allure model is a JBL system, with eight speakers and a boot-mounted bass box. It also has an increased power output of 240 watts, but despite this it offers little improvement in sound quality over the system found in the 206 hatchback. The increased power does allow it to maintain volume when driven with the roof down.

Allure models are fitted with leather trim as standard, with a choice of seven exterior and three interior colours. The majority of the dashboard remains black regardless of the trim colour, so with light leather it gives a classier feel to the interior, rather than an all-black dash, seats and door trim. The glovebox lid is also leather covered, which increases the quality feel.

Manoeuvring the 206CC can be easy or more difficult, depending on the position of the roof. With it folded down, there are no blind spots to the rear, making reversing into a parking space a breeze. The power steering and respectable turning circle also contribute. With the roof up however, the large pillars and small rear window do parking more tricky, but the 206CC's small dimensions mean finding a space should rarely be a problem.

No spare wheel is fitted, instead two cans of tyre inflator are located in the boot.

Ford Streetka Stylish and good to drive, but may be too basic for some tastes

Mini One Convertible Fun to drive and stylish, but engines can sound coarse

Citroen C3 Pluriel Novel design but roof is awkward to use