Affordable with a sporty exterior 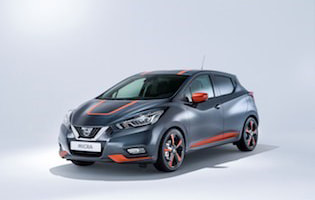 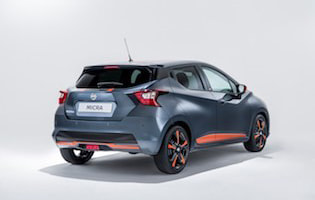 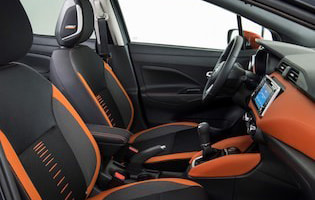 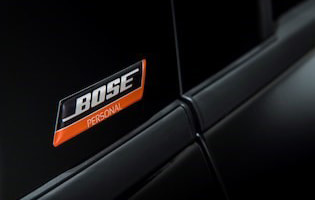 This is the latest, fifth-generation version of Nissan's Micra supermini. Where older versions of the Japanese supermini have been rather subdued in terms of their appearance, this latest model really shakes things up, thanks to its dramatic design and sporty looks.

Personalisation is one of the key features of the new Micra. Nissan has made the new model available in 10 different exterior colours, as well as a range of decals and other customisation options. All up, there are 125 exterior variations available, meaning customers will really be able to make their Micra stand out.

The Micra is available with a choice of three different engines – a 1.0-litre petrol, a 0.9-litre petrol and a 1.5-litre diesel. Our test vehicle made use of the turbocharged 0.9-litre unit, which develops 89bhp and manages a claimed economy figure of 64.2mpg, and CO2 emissions of 99g/km.

Nissan claims the new Micra is more spacious than ever. While this might be true when compared with older models, there's still not a great deal of space inside – particularly in the rear. Adult passengers will find headroom is incredibly limited in the back seats, and even when sat behind a driver of average height, there's still very little in the way of leg and kneeroom.

Our verdict on the Nissan Micra Tekna 0.9I IG-T 90

There's no denying that the Micra is a safe and stylish little supermini, and also one that won't break the bank to buy or keep running. While these characteristics certainly help to make it an appealing proposition, there are a couple of issues that hold it back. Namely its driving position, the power delivery from the 0.9-litre engine and the vague manual gearbox. If you can see past these things, the Micra makes for a competent option in the segment.

Prices for the Nissan Micra start at a respectable £11,995 for the basic, entry-level Visia model, and rise to £18,765 for the top-of-the-line Tekna model with a diesel engine. With options fitted, our petrol-powered Tekna model cost £20,020. Running costs won't be too pricey, either, with all engine options returning more than 60mpg on the combined cycle. Only the 0.9-litre petrol engine emits more than 100g/km of CO2, so annual VED payments won't be too high.

Front seat passengers will have no cause for complaint whatsoever as far as space is concerned. Unfortunately, the same can't be said for anyone who finds themselves in the back seats. Even with an average-height adult in the front, there's practically no knee-room, and that swooping roofline also means there's no headroom – at least for taller passengers. As far as boot space is concerned, the Micra offers 300 litres of luggage capacity.

Nissan has kept the Micra's controls and displays simple, and this is definitely a good thing. The infotainment system display is clear and intuitive, while the dials in the instrument binnacle are also crisp and easy to read. All of the controls for the features such as the air conditioning are within easy reach and laid out in a logical manner, meaning you won't have to take your eyes off the road for too long when searching for them.

The Micra didn't exactly blow us away with how comfortable it was when we put it to the test. It didn't cope with bumps in the road particularly well, and thanks to those large 17-inch alloys there was also a fair deal of road noise that made itself heard in the cabin. While the front seats were supportive, the Micra's driving position was also a bit off, at least in our case anyway.

The Nissan Micra comes with the basic security features you'd expect from a modern car, with remote central locking and an engine immobiliser fitted as standard. As the Nissan badge isn't exactly classed as upmarket, the Micra shouldn't attract too much unwanted attention when left parked on the street.

The Nissan Micra scores well in the safety department. In Tekna specification, the Micra comes as standard with a wide range of features designed to keep occupants safe, including lane departure warning, intelligent emergency braking and hill start assist to name but a few. Because of features such as these, the Micra managed to score the full five-star rating when crash-tested by Euro NCAP. However, it pays to note that entry-level models only achieved four stars, as they don't include some of the safety features included in higher grade models.

While the Micra might look like a rather sporty little supermini, it's not the most exciting car to drive. There are a couple of issues that came to our attention during our time behind the wheel. First is the manual gearbox, which has a throw that is far too long and lends it a vague and inaccurate feeling. Second is the power delivery from the 0.9-litre petrol engine fitted to our test car, which comes in a surge past 3,000rpm and makes smooth driving a bit more difficult.

Motorists with young families will find that the Micra makes for an ideal urban runabout. There's enough space in the back for small children, and the 300-litre boot will easily be able to cope with the weekly food shop. Parents with teenage children may not find the Micra as appealing, owing to the incredibly limited space in the back seats.

With prices starting at £11,995, the Micra is a realistic option for a young driver who has just earned their licence. It won't be too expensive to insure or run, and the wide range of colours and personalisation options will likely also appeal to those buyers who want to make their Micra stand out from the crowd. Parents of newly-licenced drivers will find the Micra's range of safety equipment appealing, too.

Unlike a number of other vehicles in the Nissan range – Qashqai, we're looking at you – the Micra is actually a rather exciting-looking car. Contrasting wheels and decals give it a distinctly sporty image, even if it doesn't quite have the performance to live up to its looks. Build quality will give no cause for concern, as the cabin feels solid throughout.

With its five-door layout, getting in and out of the Micra isn't much of a challenge at all. It sits at a reasonable height, and the door apertures are large enough that you don't have to squeeze into the cabin. Access to the boot is similarly easy, although there is a small lip that you will have to lift heavier items over. The majority of people won't find this a problem at all, however.

We tested a top-of-the-range Tekna grade Micra, which features a Bose sound system as standard. Sound quality from the speakers is certainly good, but we're not sure it's any better than that from a regular car stereo system. In addition to the premium sound system, there's also DAB radio, satellite navigation and Bluetooth connectivity as standard. All of these features are controlled through the Micra's seven-inch touchscreen display.

The latest Nissan Micra is a highly customisable car, with 10 different exterior colours, three interior trims and and three styling packs in four different colours available. Customers really do have the ability to make their Micra their own, whether they opt for bright exterior colours with sport decals, or a subdued colour scheme for a more everyday look. The Micra is available in six trim levels: Visia, Visia+, Acenta, N-Connecta, Tekna and Bose Personal Edition.

The Micra isn't a particularly large car, so parking is a doddle. There's good levels of visibility out of the cabin, and thanks to a standard fit rear-view parking camera and rear parking sensors, squeezing into those tighter spots should never be too difficult. Our test vehicle was fitted with the Vision+ pack, which includes a 360-degree camera, as well as another camera above the left front wheel. This is a £550 option, and well worth the money.