Micra C+C retains family likeness from at the front 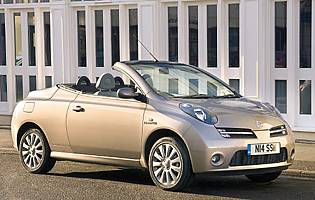 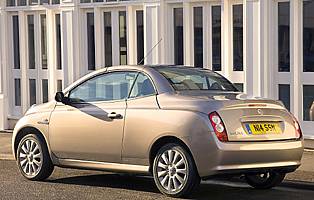 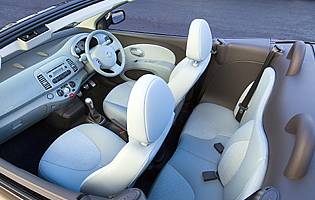 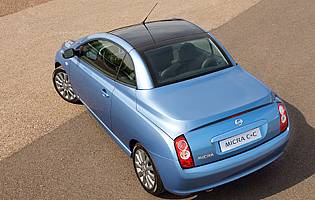 Until only a few years ago, the concept of a convertible with a metal folding roof was the preserve of models that inhabited the prestige market. Now there are all manner of cars sporting such features - right down to the humble supermini. Peugeot and its 206 CC might be the most memorable example, but Nissan's attractive Micra C+C moves the game on significantly.

A company once famed for its worthy but dull vehicles, Nissan is no longer content with churning out faceless cars. If you need convincing, look no further than its selection of off-roaders. However, the same can be said about its Micra supermini - it's far from conventional.

More outgoing in the looks department than anything else on the market, the Micra is something you either like or you don't. That said, it's difficult to find someone who doesn't like the concept of a convertible car. In an aspirational context, it's always the model that attracts the most attention.

With the Micra C+C, Nissan has succeeded in dragging the spotlight away from some equally impressive rivals. A little bit longer and lower than the donor hatch, the C+C boasts the now expected metal folding roof. The three-section canopy folds neatly into the car's boot under electric power, affording occupants a refined, hood-down driving experience.

Another plus-point is the car's styling. Unlike earlier attempts by competitors, the Micra was always designed with a convertible in mind. As such, its boot doesn't look ungainly or over-large despite the need to accommodate the folded roof and electric mechanism.

Our verdict on the Nissan Micra C+C 1.6 16v Essenza

Yes the Micra C+C has been designed and marketed with the fairer sex in mind but, even when taken in isolation, the car is fun to drive, practical and good value. Much of this praise should be directed at the donor supermini, which is a fundamentally good car in its own right. Factor in Nissan's attention to detail and the ease at which the C+C's roof can be raised or lowered, and you've got an impressive package.

For a car offering so much over the base hatchback, the convertible Micra C+C is good value for money. This is apparent not only in the car's level of standard equipment but also the modest running costs. Nissan products are usually very reliable and economical, and the Micra should be no different in the long run.

Starting at the rear, the Micra's boot is a generous size and easily swallows a considerable amount of shopping or soft travel bags. This space is reduced to approximately a third of that when the roof is retracted - you must pull across a retractable cover to ensure nothing is above the maximum load height. Sadly, with the roof down, the loading aperture is much smaller. In the cabin, the usual Micra cubbyholes are present, including one under the front passenger seat cushion. The rear seats serve as a useful storage shelf, as they're not much use for sitting on.

It's all familiar Micra switchgear in the cabin, and everything works as you'd expect. The digital climate controls are easier to use than the rotary dials on the lesser model models, and steering wheel switches for basic audio functions and the trip computer are a welcome addition. As with all Micras, the power steering offers a lot of assistance while the gearshift and pedals require little effort to operate.

For two adults, the Micra is a surprisingly sensible proposition. Cabin width is acceptable, road noise is kept to a minimum and the car's seats are supportive but not too firm. The rearmost seats should be viewed as nothing more than an upholstered shelf - legroom is noticeable by its absence. You sit high up in the Micra, making this and the car's low roof something of a negative factor for tall occupants.

As to be expected, remote central locking is standard along with a lockable storage space under the front passenger seat. The Micra's metal folding roof is certainly a more robust alternative to the traditional fabric roof when it comes to preventing theft and vandalism. For the top model, Nissan offers its 'Intelligent Key' system which is, essentially, a keyless go function. You keep the fob in your pocket at all times, lock or unlock the car by pressing a button on the door handle and start the car by twisting a plastic 'key'.

Twin front and side airbags are the order of the day in the Micra C+C. Rollover protection is key with any convertible, and this Micra gains a pair of rear protection hoops. Active systems run to the predictable anti-lock brakes and electronic brakeforce distribution, with the top Essenza model getting an electronic stability programme (ESP).

For a car designed more for its visual impact, the Micra C+C acquits itself well to most situations. It's no driver's car, although such revelation is unlikely to deter buyers. The Micra works best when ambling around town. Its easy-going nature is evident from the moment you pull away. Considering the car's added bulk, neither engine feels strained. The 1.6 is a better if you regularly use motorways though, thanks to its more relaxed cruising abilities.

Aside from the Micra's generous boot, there's little else for the family buyer to feel good about - this car was never designed to be an all-rounder. If used as a second car, at least the passenger airbag can be switched off when accommodating a rear-facing child seat.

There's every chance that a novice driver will warm to the Micra C+C. Low running costs and Nissan's reputation for reliability should make the package an appealing one. Being easy to drive and park - apart from a minor rear visibility issue - there's no reason why a newly qualified driver shouldn't feel at ease in the Micra.

Nissan has never struggled in the quality department, but it's only in the last few years that its products have become more desirable. The firm's decision to focus on lifestyle off-roaders has raised its profile enormously. The same is true of the Micra C+C; the appeal of the compact convertible has risen of late, and cars with metal folding roofs are seen to be the most attractive.

With only two doors, this Micra offers good access for front seat occupants. The doors open nice and wide, while the roof height is no obstacle for people of average height. Rear seat access (and the seats themselves) would appear to be largely ornamental thanks to a distinct lack of legroom. At the rear, the car's boot is a generous size, but with the roof folded access to any luggage is restricted to a much smaller load aperture.

Standard fit is a combined radio and single CD player. The unit itself is easy to operate and boasts a clear display. Sound quality is also good - even with the roof down. The flagship Essenza model gets an in-dash CD changer.

You can go from a rather sober black to much brighter, lighter exterior colours - the choice is yours. Either way the Micra C+C looks good, although the pale metallic blue is a smart compromise. Inside, light plastics abound. While not good for keeping clean, the overall ambience is welcoming.

A small car, this drop-top Micra performs well in the parking stakes. Its light steering helps enormously, forward visibility is good, and the car's mirrors are a decent size. Rearward vision isn't as good, but that's the fault of the high rear shelf and thick roof pillars. Putting the roof down helps a little but the car's high rear shelf still results in an obscured over-the-shoulder view. Thankfully, rear parking sensors are a cost option.

Ford Streetka Cute-looking Ford is affordable and good to drive. Cloth roof is a disadvantage here

Mini One Convertible Fashionable alternative lacks the Micra's versatility. Pricey in this company

Peugeot 206 CC Compact Pug is showing its age and feels underpowered. Stylish and popular, though