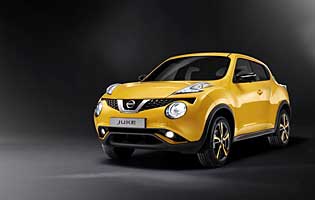 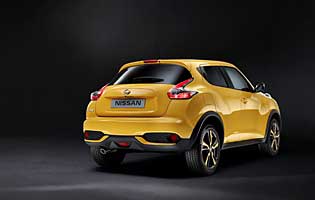 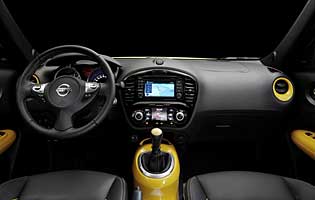 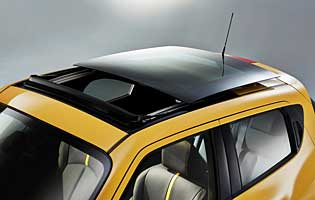 Nissan broke the established segment barriers when it introduced the Juke, a supermini-SUV crossover that aimed to repeat the success of the Qashqai but on a smaller scale. The recipe was a success and the Juke has proved to be extremely popular, and now it has been subtly revised with an improved engine choice and greater personalisation.

While the Nissan range contains some conventional models such as the supermini Micra and sporty 370Z coupe, its biggest successes in recent years have come with segment-busting crossovers. The Qashqai SUV paved the way, replacing its unloved Almera hatchback, while a size down from that came the Juke.

Aiming to take sales from both rival superminis and small SUVs, the Juke uses the same approach as the Qashqai; a design-heavy top half with coupe-like influences on top of SUV hardware, although in this instance four-wheel drive is optional on some models only. However, it is clearly designed to be an on-road vehicle that plays on its style rather than any mud-plugging ability.

No question, the Juke is something of a head-turner. This high-rise hatchback boasts a clever blend of supermini and SUV styling cues. The subsequent lofty driving position is a bonus, as is the easy cabin access. Thankfully the car is also good to drive. A polished ride compliments the willing petrol and diesel engines, and improvements in this area mean it can now compete with the best in the class.

Although Nissan pitches the Juke as a lifestyle car, there's little question that it will also double as a family vehicle. Anyone with a small family unit will find the Juke easy to live with. There's enough room in the rear for children, and the rear load space is now better than before to make carrying pushchairs and larger items a more viable option.

Our verdict on the Nissan Juke 1.6 DIG-T

The Juke remains an intriguing car and one with many good attributes, particularly its distinctive design and fine dynamics. The diesel or small turbocharged petrol make better all-rounders where as buyers looking for something sporty would be best served by the Nismo model. That said, the Juke will no doubt find many happy buyers.

The key change to the revised Juke is the increase in boot space. The outgoing model had a high boot floor, whereas the new model has a split-level boot that opens up the bottom of the load area on two-wheel drive models. Additionally the rear seats now fold flat, making it easier to make use of the available space. For a car of this size space is good for passengers front and rear too.

There are no changes inside the cabin, but this is no bad thing. The two main dials are clear enough to read at a glance, and there are two central colour screens; one for the climate control readout and a larger one for the satellite navigation and media interface. The layout is easy to understand and holds no surprises.

Nissan has made minor suspension changes in order to improve performance and the Juke rides with smooth compliance. There is perhaps a slight performance bias to avoid excessive body roll in corners, but broadly speaking it is a comfortable car. Some buyers may find the driving position slightly unusual and the amount of steering wheel adjustment is a little limited, but most buyers should find it easy to get comfortable.

As standard the Juke has an advanced immobiliser and locking wheel nuts, while Accenta models add privacy glass making it harder for potential thieves to look into the cabin. The new boot design also means there is the potential to hide items beneath the boot floor too.

Six airbags are standard across the Juke range, covering the front, front side and full-length curtain airbags, as well as ABS, Electronic Brakeforce Distribution and Brake Assist for emergency stops. Electronic Stability Program is the resident stability control and aims to correct any perceived loss of grip through corners. The Nissan Safety Shield package on higher specification models is a welcome addition and impressive at this level.

Without the sporty image that goes with the high-spec Nismo model, the Juke fitted with the 1.6-litre turbocharged engine offers a surprising turn of speed. Fitted with the six-speed manual gearbox it has just two driven wheels, although this is preferable to the CVT automatic option with four-wheel drive. All the controls operate with an assured slickness and it makes for a fun car to drive, without compromising too much in terms of ease of use.

Young adults are the main target market, but the Juke has two sets of Isofix child seat mounts on the outer rear seats and a cabin that is a little different from the norm. The improved boot space also makes it much more capable of performing family duties.

The Juke has a distinctive style and the purchase price represents excellent value for all the car's ability and standard equipment, even it will be one of the more modestly-powered versions that is likely to be most popular amongst new drivers.

Nissan's Japanese build quality and image is a blessing and a curse in the current market. Nissan saw the shift coming where the mid-level accessible brands would be squeezed, and has adapted with wildly different car designs that give it an entirely separate image to those manufacturers around it. The Juke itself divides opinion with its looks but most of the fittings are of a high quality and feel robust.

With five doors as standard the Juke has practicality advantages over its main rivals, and its rear legroom is greater than the competition too. Shorter front doors mean that they can open wider, and the step forward into position is easier. The raised seating position also makes it simpler to hop in and out of the car, although the large side bolsters on the front seat backs do affect matters a little.

Six speakers are enough to give a good spread of sound, and there are several ways of inputting music. Bluetooth allows wireless music playback, while a USB port also gives full integration of the media player into the car's system. A basic 'plug and play' auxiliary port is also present for simpler music playback. Audio controls are installed on the steering wheel for ease of use without taking your eyes off the road.

The latest Juke offers an even wider range of colours, all at the brighter end of the scale. Its radical looks suit brighter colours with darker shades diminishing their impact. The same goes for the inside; standard cars have a broadly black interior but with the optional Nissan Design Studio pack you can add coloured trims to the air vents, centre console and door finishers as well as the stitching on models with leather.

The Juke's exterior design means rearward visibility is relatively limited, and reversing as result requires a little care. The slightly raised vantage point helps to give the driver a better view for manoeuvres however and Acenta Premium models and above get the clever 360 degree camera system which makes getting into position much easier.