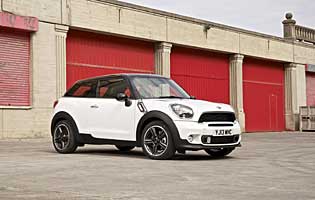 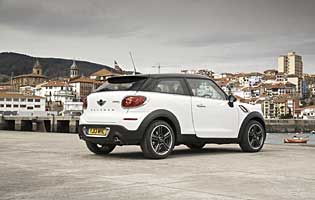 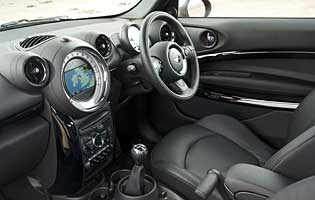 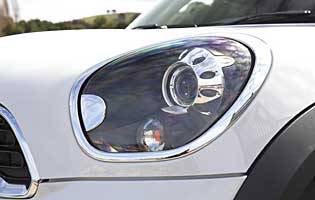 The Mini range continues to expand in every sense of the word with each passing year, and the latest iteration is the Paceman. Based on the existing Countryman model, the largest in the range, the Paceman is intended to be a more sporty coupe crossover but with sufficient space to carry four adults.

With the market for the Mini as strong as ever it makes perfect sense that a wider choice of models will cater for a wider audience, hence the introduction of the Paceman. The Countryman model on which it is based is already a car that doesn't fit easily into traditional model template, being something of a hatchback/SUV crossover, but the Paceman is even more niche as it does without the rear pair of doors.

The Paceman is in essence a two-door coupe, but its tailgate is more akin to that of a hatchback. The Countryman underpinnings mean it has a relatively long wheelbase which is good for interior space. It also has a number of visual differences compared to the Countryman, particularly the flared rear wheel arches, imposing grille and steeping-sloping roof.

Underneath the skin the Paceman also comes with the ALL4 four-wheel drive system, available with some petrol and diesel engines. Fitting in with the car's SUV looks, the ALL4 system automatically distributes torque between all four wheels to maximise grip.

The cabin itself will be instantly familiar to Mini drivers, with the large central speedometer dominating the upright dashboard. The Paceman has a mix of new and carried over elements to the cabin, but as with each passing Mini variant, the quality has improved yet again. The Paceman also offers Mini Connected, a smart phone system that allows you to perform internet searches, operate navigation, phone and audio through an interface.

Our verdict on the Mini Paceman Cooper SD All4

The Paceman is another niche Mini aimed at a relatively small number of potential buyers, but such is the strength of the brand and its image it is likely to be popular. It is not as practical as its Countryman sibling but for some the unique looks will be worth the sacrifice.

Even the turbocharged Cooper S offers respectable economy and emissions performance, but for the frugal a diesel-powered version will do even better. Although the initial purchase price is a little higher than its rivals, residual values are also likely to do the same.

Although not the best in class, this is finally a Mini that can cope with decent amounts of luggage and full-sized adults in the rear. Storage space is not exceptional, but the rear storage system is useful and the seating options allow the amount of luggage space to be fully optimised.

The layout of the Paceman is largely familiar, with the giant central speedometer at the heart of it. However, including an information screen and sat-nav in the centre has relegated the actual speed information to the outside of the dial, making the auxiliary readout essential. With the same basic functionality as BMW's I-Drive system the Mini's layout has plenty of options, although the control stick appears to be designed for looks rather than function and hence is a little fiddly.

Ride comfort is good enough for most buyers, although obviously the larger the alloy wheel specified the less absorbent the ride. The ride quality issues with run-flat tyres have been eradicated, and although the most severe bumps are felt in the cabin, all occupants can enjoy a relaxed drive.

All Paceman models come with an alarm and immobiliser as standard, while an electronic key and remote central locking ensure a high level of security.

Adding four-wheel drive to the mix elevates the Paceman's safety kit to a new level, as it already benefits from standard ESP and a strong safety cell. With high levels of performance and grip, the Paceman is a car with a high level of active safety.

The pleasure of driving is key to the Mini's appeal in all its guises, and the Paceman manages to retain most of this appeal. The steering is still sharp, if not quite as direct as the hatchback, and all the major controls respond keenly to inputs. It is far from hyperactive though, and is happy to trickle through traffic. The Cooper SD has more than respectable outputs but the extra weight of the ALL4 system does blunt the performance somewhat.

The Paceman has the space for a small family but the three-door configuration may be too much hassle for regular use. However a small family with children old enough to manage climbing aboard on their own won't have a problem.

The Paceman in Cooper SD form is a relatively expensive car but the cheaper versions would make an excellent first car, thanks to the good running costs, sound visibility and easy controls.

The Mini's image is almost untouchable, recalling the original 1960s Mini but offering modern convenience and reliability. The high degree of personalization also allows buyers to create a car that feels individual, which is a major attraction. The Paceman is unquestionably a quality product, and this is evident through its design, build and materials.

The Paceman's front doors are pretty large - if anything a little effort is required to open them - but that gives excellent access to the front. At the rear, once the seat is tilted and slid forward the entry space is reasonable, although the sloping roofline robs a little headroom on the way in. At the rear the tailgate is large and gives good access, although if you use the boot release on the key fob it doesn't pop up high enough to avoid using the handle anyway.

All models are fitted with a radio/CD as standard, operated by simple controls. Sound quality is respectable, with the speedometer displaying audio information. Upgraded systems are available increasing output and quality.

As well as a greater choice of cabin colours, decent materials bring a quality feel. The vast majority of the plastics and fabrics feel sturdy and hardwearing, while the mix of chrome and black plastic works well. Additionally, an interior light package gives subtle illumination throughout the cabin as well as the option to change the colour at the flick of a switch.

The taller stance of the Paceman helps the view out although countering this is the sloping roofline which leaves a smaller rear window. Helpfully parking sensors make life even easier, although it is worth remembering that the Paceman isn't as small as its appearance would suggest.