In the right colours the hot Countryman looks the part 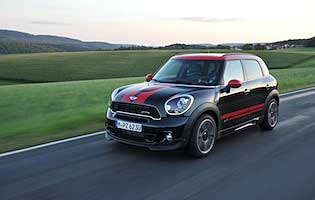 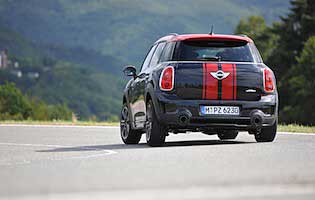 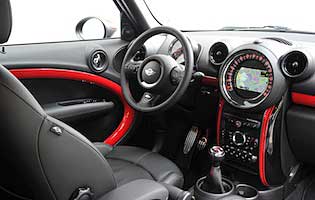 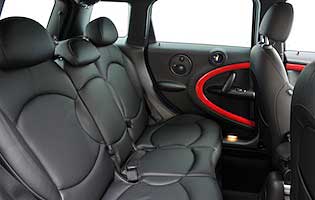 It's no exaggeration to say the current Mini range has been an overwhelming success. From humble, one model origins the range has expanded to cover a comprehensive choice of bodystyles. The Countryman might have initial proved controversial but it was an essential addition and proved an overnight hit. And it was only a matter of time before a John Cooper Works hot hatch model appeared.

Existing versions of the Mini have all been variations on the hatchback theme. The Countryman is further away from that template, sitting somewhere between an SUV and an MPV. In terms of size it is the largest Mini yet, and it is just a few centimetres shorter than a BMW 1-Series. Its exterior appearance is a clear blend of the family Mini styling cues combined with a high-riding stance designed to align it with smaller SUVs.

To then add a high performance version appears at odds with the Countryman's market position of family holdall, but you can't blame Mini for exploiting its valuable John Cooper Works (JCW) sub-brand. As such, the most powerful Countryman boasts a healthy 218 horsepower plus the all-wheel drive system that sets the Countryman apart from the rest of the Mini line-up.

Changes to the car's suspension, brakes and engine plus an exterior sporting a more go-faster look ensure that this Countryman can't be mistaken for anything else in the range. The end result is, predictably, a much quicker car. Crucially, however, it's also more engaging than the regular example.

Factor in the JCW's standard fit all-wheel drive system, something that's also available on other cars, and its potential can be harnessed regardless of the weather. In fact, aside from the performance potential, this extra grip is just as much a safety feature as it is something to keep you on the straight and narrow when travelling at speed.

Our verdict on the Mini Countryman John Cooper Works ALL4

More horsepower and a suitably sporty appearance ensure this hot Countryman stands apart from its stablemates. The addition of the famous John Cooper Works branding and associated performance upgrades ensure rapid progress and a more exciting ownership experience. It might not be the last word in hot hatch agility as more capable cars exist, but the Countryman JCW offers fast Mini fans the best of both worlds - a car with space and a serious turn of pace.

While the other, less powerful cars offer respectable economy and emissions performance, you'd be foolish to think the JCW variant will behave the same. The harder you drive it the more it'll cost in fuel, and you'll have to budget for a more costly insurance premium. Elsewhere, adding sufficient options to make it appealing is the norm and also likely to hit your budget.

Although not the best in class, this is finally a Mini that can cope with decent amounts of luggage and full-sized adults in the rear. Storage space is not exceptional, but the rear storage system is useful and the seating options allow the amount of luggage space to be fully optimised.

The layout of the Countryman will be largely familiar to Mini fans, with the giant central speedometer at the heart of it. However, including an information screen and sat-nav in the centre has relegated the actual speed information to the outside of the dial, making the auxiliary readout essential. All other switchgear performs as you'd expect, and proves to be intuitive.

On the whole ride comfort is good, although the JCW's suspension settings are a notch above that of the Cooper S so don't expect a particularly fluid ride in town. Cabin space is sufficient for four adults to travel in reasonable comfort and, aside from the car's sporty popping and banging, engine noise isn't usually intrusive.

All Countryman models come with an alarm and immobiliser as standard, while an electronic key and remote central locking ensure a high level of security.

Adding four-wheel drive to the mix elevates the Countryman's safety kit to a new level, as it already benefits from standard ESP and a strong safety cell. With high levels of performance and grip, the Countryman is a car with a high level of active safety to counter the JCW's extra performance.

As befits any Mini sporting the JCW badge, this Countryman variant promises a faster and firmer riding experience than its stablemates. The extra horsepower allows you to make especially brisk progress, although the firm suspension can come unstuck on poorly surfaced urban roads. With a suitably sporty exhaust soundtrack, direct steering and supportive seats, this interpretation of the hot hatch should please the Mini faithful.

This is a Mini that really can perform as a family car, with enough space to cope with at least an average brood. It also has the kind of visual appeal and kudos to be a hit with children. And if you wish to combine hot hatch thrills with practicality, the Countryman JCW makes a convincing argument.

In JCW form the Countryman is an expensive and rapid car. Cheaper versions would make an excellent first car, thanks in part to modest running costs, good all round visibility and easy to use controls.

The Mini's image is almost untouchable, recalling the original 1960s Mini but offering modern convenience and reliability. The high degree of personalization also allows buyers to create a car that feels individual, which is a major attraction. The extra size of the Countryman has opened the brand up to a wealth of new buyers, and it was only a matter of time before a hot hatch JCW variant arrived to further boost appeal.

Thanks to four well-sized doors and the increased ride height, getting on board the Countryman is easy, especially for those cars with two rear seats. The same can be said for the boot, with a good-sized tailgate and low loading lip to aid access.

All models are fitted with a radio/CD as standard, operated by simple controls. Sound quality is respectable, with the speedometer displaying audio information. Upgraded systems are available increasing output and quality, plus the ability to connect phones and MP3 players is a welcome bonus. Where fitted, the sat-nav unit is easy to use.

As well as a greater choice of cabin colours, decent materials bring a quality feel. The vast majority of the plastics and fabrics feel sturdy and hardwearing, while the mix of chrome and black plastic works well. At JCW level the extra emphasis on sportier trim is obvious and welcome.

The taller stance of the Countryman makes it easier to park despite the larger dimensions, and the addition of parking sensors removes all the stress of getting into a space.

Kia Soul No four-wheel drive or hot model, but characterful inside and out