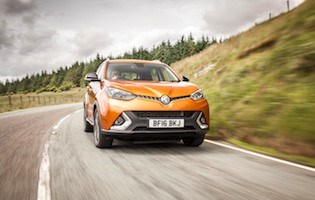 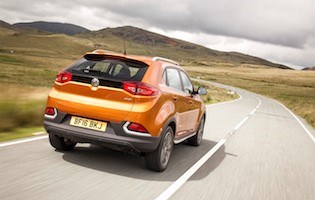 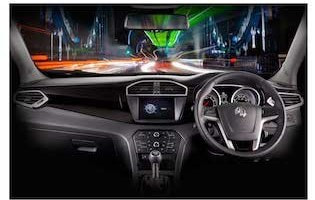 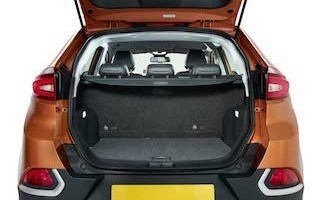 The GS is MG's first crack at making a family-friendly, affordable SUV. It joins the MG 3 in the firm's line-up. The GS is only available with one engine, a 1.5-litre turbocharged petrol unit that produces 164bhp and can shift the car from 0-60mph in 9.6 seconds.

MG offers the GS with two transmission options – a standard-fit six-speed manual and a seven-speed dual-clutch transmission that is only available on top-specification Exclusive models. Surprisingly, the addition of the automatic ‘box doesn't compromise fuel efficiency too much – with MG claiming it can manage 45.5mpg while the manual can achieve 46.3mpg.

To look at, it would be hard to call the MG GS an attractive car. There is just something about its proportions that make it look a bit swollen and ungainly, but then again, beauty is in the eye of the beholder. It's certainly a far cry from the brand's rather pretty sports cars of yesteryear.

Inside, the cabin is dull yet impressively functional. Everything is laid out in a logical manner, and the controls – particularly those on the dash – have a purposeful feel to them. Plenty of cheap plastics mean it's not the nicest place on earth to sit, but it has plenty of space and is comfortable.

To drive, the GS is surprisingly competent. While it certainly isn't exciting by any definition, it gets the job of being a means of transportation done without any complaints. It is composed at motorway speeds, and copes with lumps and bumps without too much fuss.

Our verdict on the MG GS Excite

While the MG GS isn't the most amazing or exciting car on the road, it drives well enough and is relatively affordable. Families looking for a practical, cut-price SUV will likely find it an appealing option. Thanks to its spartan interior, it should be able to stand up to any abuse young children throw at it.

Prices for the MG GS start at a reasonable £14,995 – not too bad for a practical five-seat family car. That said, though, that figure doesn't get you much in the way of standard equipment. With only the one 1.5-litre petrol engine in the range, fuel consumption isn't wonderful, with the most efficient model only being able to manage a claimed figure of 46.3mpg on the combined cycle.

Thanks to its practical five-seat layout, you won't find yourself too short of space in the MG GS. Up front, the driver and passenger are afforded plenty of head- and shoulder room, while back-seat passengers will also find a generous amount of leg- and kneeroom. The boot is 483 litres, which isn't exactly huge, but it will certainly fit a couple of suitcases or a large weekly shop with ease. Fold the rear seats down and this load capacity is increased to 1,336 litres.

While the MG GS's interior might be devoid of any character, you can't fault its layout. All the controls are organised in a functional and sensible manner and are within easy reach of the driver, while the buttons have a rather pleasing, purposeful feel to them, which is a bonus. The dials in the instrument binnacle are also clear and easy to read. The only snag is the material on the steering wheel and gear knob feels horridly cheap.

Credit where credit is due, the MG GS is quite a comfy car to drive. The driving position is spot on and there is a decent amount of adjustability, and while the seats aren't hugely supportive, they are soft and comfortable on longer drives. At motorway speeds, there is a small amount of noticeable wind noise and tyre roar, but not enough to warrant any concerns.

The MG GS doesn't feature any high-tech security features, although it does come with central locking and an immobiliser as standard. Thanks to its rather unappealing badge, it isn't likely that it will find itself at the centre of any unwanted attention from potential car thieves when parked on the street.

Unfortunately, the MG GS has not been officially crash-tested by Euro NCAP, so a star rating has not been awarded. That said, it does come with features such as six airbags and stability control, although these may not be enough to pass muster in the increasingly stringent crash tests. As a rough comparison, the MG 3 hatchback scored just three out of a possible five stars.

Unfortunately, the MG GS doesn't exactly ooze driving appeal – but then again, not a huge amount of crossovers do. That said, while it might not be the most exciting thing to drive, it is a competent runabout. The petrol engine is free-revving, the steering provides respectable amounts of feedback and the gearbox isn't bad either. On the motorway it's composed and comfortable, while bumps and uneven surfaces are dealt with without much fuss.

The MG GS would be easy to justify as a family car. It's certainly affordable, drives well and comes with plenty of space for the children. Thanks to its rather basic interior, you shouldn't have to worry too much about surfaces being scuffed by grubby kids as much as you might in a more upmarket car. While the MG GS might not be the most exciting car on the market – in fact, it's far from it – as a family proposition it makes sense.

While the MG GS might not be out of the price brackets of some learner drivers – the top-of-the-line Exclusive model costs from £20,995 – chances are the car's larger size might be an off-putting factor. If you're dead set on the MG badge, better to opt for a smaller (and far cheaper) MG 3 hatchback.

At the end of the day, while the MG GS's interior may look incredibly dull, it doesn't feel as though it has been badly put together. Build quality is fairly sound, and the cabin gives the impression it should be able to stand up to any abuse young children might send its way. In terms of brand image, however, the MG won't inspire any envious feelings in passers-by who might see it parked up on the drive.

As you would expect from a car in this segment, getting in and out of the MG GS is a breeze. The door apertures are wide, and thanks to a relatively narrow sill, you won't have to stretch too far to reach the seats. While it sits at a perfect height for adult occupants to climb aboard, smaller children may need a little bit of assistance.

Mid-range Excite models and above come fitted with features such as DAB radio, Mirror Link, MP3 and iPod connectivity as well as Bluetooth. These features are controlled through a large touchscreen display, which to its credit is fairly quick and responsive. That said, though, the graphics are rather old-fashioned. Top-of-the-line Exclusive models also benefit from satellite navigation as standard. In terms of sound quality, you won't be disappointed by the GS's in-car stereo system, which with the right music can do a good job of livening up the car's interior.

The MG GS is available in a rather dreary range of colours that are no doubt intended to make the crossover appear to be a more premium product than it actually is. Colours available are Arctic White, Jet Black, Sahara Gold Metallic, Aspen Silver Metallic, Orange Metallic (arguably the pick of the bunch) and Mocha Brown Metallic. While they aren't necessarily terrible, a low-cost car such as this should be available with more vibrant colours to ramp up its cheap and cheerful appearance. Trim levels comprise Explore, Excite and Exclusive.

In Excite specification and above, the MG GS comes equipped with a rear parking camera and rear parking sensors as standard, which makes parking the crossover that much easier. That said, visibility out of the car is decent too, meaning parking without these aides is never going to be too much of a problem. Thanks to light steering, low-speed manoeuvres aren't too difficult either.