From the front the diesel SLK looks just like any other 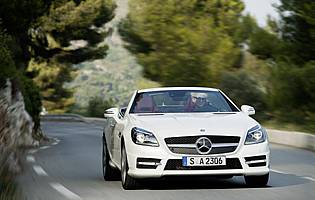 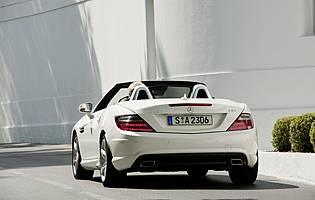 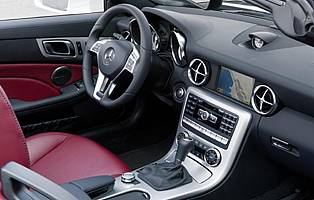 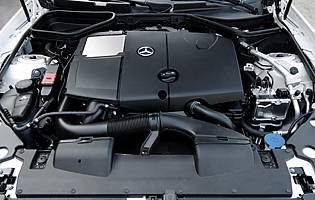 In times of greater environmental and financial consciousness among car buyers, Mercedes have had to listen to consumer demand for a relatively affordable diesel convertible. Customers want higher fuel economy and greater cruising range along with performance, and the four-cylinder 250 CDI engine was chosen as the option with the best balance of talents.

Using essentially the same 2.1-litre diesel as already used in the C, E, CLS and other model lines, the SLK CDI is the first diesel convertible Mercedes. The engine was chosen over a six-cylinder unit to keep the car's front end as light as possible in order to maintain the SLK's handling balance. Equally, the lower-powered options were inadequately punchy.

It has been added to the range with an automatic gearbox as standard, and is a fraction more expensive than the petrol-powered SLK 200 when equipped with an automatic. The diesel is more powerful and faster, with a considerably better fuel economy figure that means fewer fuel stops. It also offers an additional psychological running cost advantage.

However, there is an obvious mismatch between the SLK and the 250 CDI engine, both ideologically and behind the wheel. The sporty convertible is the perfect partner for a sonorous multi-cylinder petrol engine, and the diesel falls short in several very key areas in terms of driver satisfaction. It does conjure an excellent potential cruising range, though.

Mercedes would like the SLK CDI to appeal not just to company car users who want something more sporty-looking. It's designed to be a classier, more upmarket ownership proposition than a diesel Audi TT convertible, playing on its rear-wheel-drive sports car heritage, and under the current economic climate demand is likely to be high.

Our verdict on the Mercedes-Benz SLK 250 CDI

As an idea the SLK CDI splits opinion as cleanly as it does with its driving dynamics. For some people the diesel option combines an ideal spread of styling, open-air motoring and lower running costs, but others will baulk at the engine noise and stunted sense of engagement, choosing the SLK 200 petrol model instead. The diesel serves its purpose nonetheless, and is worthy of a place in the range.

In context within the SLK range, the 250 CDI is the most fuel-economical by some margin. It also has the lowest CO2 figure and will no doubt have increased appeal to drivers for whom that is a priority. Residuals should be strong, but could prove to be weaker than expected if desire for the model's unusual mix of attributes tails off. Insurance is pricey, but otherwise the running costs could be called very reasonable.

Although the SLK is a two-seater, Mercedes has thought out the available space well. There are net pockets, a central storage bin and door pockets, albeit restrictively small ones. With the roof up, boot capacity is surprising as long as bags are packed carefully, but with the roof down there is little room left for cases. It's not the most practical or spacious of cars.

Mercedes has its own layout for the lights and windscreen wiper controls, although some of it is common to all manufacturers. The chunky ancillary stalks fall easily enough to hand, but drivers need to take care not to confuse the cruise control and speed limiter stalk with the indicator stalk; a mix-up that can cause minor issues on the road. The displays are perhaps a little dated, but clear and functional.

As a sports car by the nature of its chassis, comfort is not the first priority. That said, the SLK CDI is reasonably comfortable, thanks in part to the well-shaped seats that support and hug the occupants closely along their legs and back. Unfortunately, too much engine noise penetrates through into the cabin, which is as much down to the noisy engine as much as any lack of soundproofing.

An alarm and immobiliser combination is standard, which includes interior protection to detect any movement inside the car. Locking wheel bolts are included too, to lessen the chances of a thief being able to steal the valuable wheels. A first aid kit and a warning triangle are also included at the factory. Finally, the hard-top roof adds an element of security over and above a soft-top convertible.

Safety is a top priority for Mercedes, and the SLK is equipped as standard with a wide variety of active and passive safety devices. Front and side airbags, an adaptive braking system and adaptive brake lights all help to prevent collisions. Stability control, a tyre pressure loss warning indicator and automatic headlights also contribute. If the worst should happen, the SLK has roll-over protection and active head restraints.

This are should be one of the car's major selling points, but the engine is too slow in its responses, too noisy and too unrefined at low speed to leave much of a smile on owners' faces. The torque-rich engine does have good punch but it comes after too long a delay. It provides more satisfaction in the arenas of fuel economy and tank range, where it does a very good job of maximising the fuel's potential.

There are very few cars that would be less suited to family life, unless perhaps as a second car for the family to enjoy two at a time. Standalone, the boot is too small and combined with the limitations of two seats the car is very inappropriate for the task. The only mitigating factor is that the efficient diesel engine might make more financial sense to a family than a petrol alternative would.

The SLK certainly has the looks and the desirability to appeal to new drivers, if not perhaps so much in diesel guise. However, the pace that the engine offers is still impressive, and too much to safely entrust to a driver with little independent driving experience. It's unlikely many would even get so far as the dealership, however, because the SLK CDI's purchase price is considerable relative to typical first car budgets.

The SLK shares the high-quality interior build and materials choices seen in other model lines within the company. The leather seats, if specified, are supple and very rich, matching the leather-trimmed steering wheel and gear lever. Mercedes' wider reputation for build quality has been much repaired after acquiring a good deal of unfavourable press in the last decade, and at the moment the brand is arguably more desirable than ever.

The two seats are mounted low to the ground, which can make getting in and out, especially against a kerb, more of a struggle than in other, less sporty cars. People with a spring in their step shouldn't find it too inconvenient. The boot is a respectable size when the roof is up, but the safety divider that has to be pulled into place before the roof can fall does make it much harder to get to any luggage underneath it.

As standard the stereo system in the two-seat cabin includes eight speakers, a 5.8-inch colour display and a telephone keypad. The concentration of buttons into a small space can make it awkward to press the right ones on the move, but with Bluetooth on hand in all models the call can be hands-free. Functionality can be improved by specifying the COMAND Online system, but all SLKs include DAB digital radio.

The SLK has the fortune to be stylish enough to work in almost any colour, and although the choice of shades reflects the generally more sober nature of its manufacturer, from red to black to white the car is one of the most attractive on the road. Equally, the interior is mature and refined, with the four-spindle air-conditioning vents and shapely seats among the visual highlights.

Rear visibility is an obvious area of difficulty, but the short boot and almost vertical tail mean reversing is actually not too trying, especially if the optional front and rear parking sensors are specified. At the front, restricted visibility over the long bonnet may put some people off unless the sensors are installed. Long doors count against the SLK in bay parking spaces, but its turning circle is more impressive, making parallel parking easier.