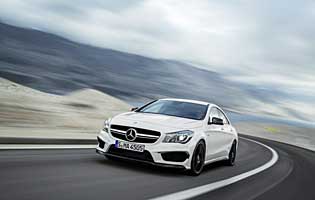 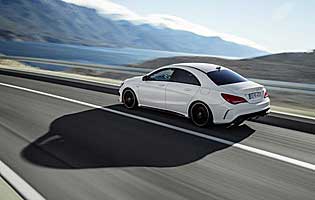 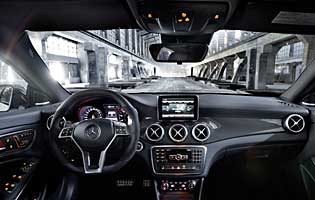 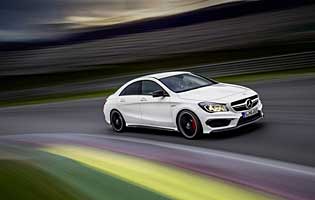 The second in a new line of entry-level AMG cars after the mechanically similar A 45, this CLA 45 AMG promises equally entertaining performance in a more affordable wrapper. Affordable, at least, in comparison with the traditional line-up of eight and 12-cylinder Mercedes AMG models.

Considered by many to be a 'baby' CLS, the CLA is Mercedes' attempt at tempting buyers away from the conventional three-box compact executive format. Modeled closely on the polarizing and similarly styled larger CLS, this CLS boasts a more streamlined profile than comparable cars from the likes of BMW or Audi.

However, in AMG-tuned guise this CLA aims to deliver a performance experience akin to that of more traditional Mercedes products to wear the coveted AMG badge. Aimed squarely at more youthful buyers with, admittedly, a smaller budget than regular AMG prospects, this CLA mirror the A 45 with a highly tuned four-cylinder petrol engine and all-wheel drive.

Opting for four-cylinder power is a big deal in the AMG universe. Until now the exclusive domain of big, muscular six, eight and 12-cylinder power units, one eye on emissions and another on affordability has resulted in a 2.0-litre unit producing a hot hatch-killing 355bhp.

Factor in the CLA's heavily revised suspension, steering and stability control electronics and you've got a potent mix of performance to embarrass all but the most expertly driven of hot hatches. Just for good measure, and to ensure you stay the right side of the white line, Mercedes has included a version of its 4Matic all-wheel drive system - a rarity until now on right-hand drive Mercedes models.

Already a striking and sleek apparition, Mercedes has given its CLA compact saloon a shot in the arm with its AMG conversion. While not the sledgehammer you might expect, there's no question the combination of highly tuned four-pot turbo motor, all-wheel drive and AMG knowhow delivers a brutally fast experience when conditions allow. A distinct notch above even the most capable hot hatch speed-wise, this CLA 45 AMG is just as impressive on the urban commute.

It's hardly surprising to learn that the CLA 45 attract the usual AMG premium. From purchase price to running costs and insurance, it does require a decent budget to enjoy properly. Factor in the modest fuel economy and you will need deep pockets to run one.

As you'd expect from the CLA's sleek profile, realistically the car will only seat four adults and taller rear passengers may find it a little cramped on longer journeys thanks to the car's sloping roofline. Cabin oddment storage space isn't in short supply, while the car's boot is a good size even if the aperture is on the small size.

Fans of the A-Class will instantly recognise the CLA 45's various controls and displays as much is shared between the two cars. As with increasing numbers of modern Mercedes cars, the one column stalk design is easy to adapt to, and the major functions are well integrated into the limited number of buttons and stalks. The main dials and central screen deliver information in an unfussy, easy to interpret manner. Only the fiddly electric handbrake button disappoints.

It might be a performance car, but the CLA 45's cabin is a refreshingly quiet environment when you're not pressing on. The sports seats are supportive and road noise is usually minimal until you fully extend the engine. Cabin space is reasonable, ensuring you don't feel squashed when all the seats are taken but rear headroom can't match that of a conventional saloon.

An alarm, immobiliser and remote central locking are standard here, while items in the CLA saloon's boot remain out of sight - a major plus over a hatchback - and there's a decent size glovebox for hiding valuables if required.

Just like with its A 45 sibling, safety provision in the CLA is well catered for, with ESP and a host of other electronic systems taking care of you. Most of the time the systems prove unobtrusive, but keen drivers might like to reduce and even turn off the features to extract the maximum from the car on, say, a track.

Largely mirroring the achievements of the A 45 AMG, the CLA boasts an almost identical turn of speed if you believe the on-paper figures. It's certainly not lacking in power or torque, and engine response plus the lack of noticeable turbo lag ensure making progress is a quick as you want it to be. The added security of all-wheel drive is appreciated, but it's only there if slip is detected, meaning the CLA is largely a front-drive experience. The pleasingly composed ride is welcome on all surfaces, although the auto gearbox can feel sluggish at times.

Hatch will always trump compact saloon and the A-Class is easily the better proposition here thanks to a more versatile boot space and higher cabin roofline. In contrast, the CLA has a more grown-up, executive feel to it. Boot space may become an issue, but the car was never designed with a family in mind.

While a regular CLA might prove an appealing option, the high performance variant is a little different and likely to be very expensive to run and insure. And that's before you contemplate its performance potential. Better to stick with a regular model if you're a CLA fan.

While you'd expect fit and finish to be excellent at this price point, some interior plastics are not as plush as some rival offerings. The CLA-Class is targeted with attracting younger buyers and this AMG version is clearly part of that plan. The AMG sub brand isn't a cheap option, which means that average ages are likely to remain high regardless of Mercedes' marketing efforts.

Despite the CLA's obvious four-door layout, there are few issues with accessibility. One bonus is that the doors are relatively short, which means that opening them in confined spaces is easy. The seats are positioned at a very reasonable height making it easy to get in and out. The boot lid opens with minimal fuss, although the aperture isn't that generous.

All models feature a large colour display mounted high up on the fascia, CD player, speed sensitive volume and Bluetooth as standard. Factor in the sat-nav option plus MP3 player connectivity and the system is a comprehensive one. Based largely around a rotary controller by the gearlever, the intuitive system is simple to use and sound quality is also good.

Just like with its big brother the CLS, the CLA's bodykit might be subtle but it does wonders for the car's appearance. Opt for one of bright colours available and it looks impressively extrovert. Predictably there's also a distinct sports theme in the cabin, with plenty of hints as to the car's potential such as bold trim materials and bright upholstery stitching.

Unlike with the shorter hatchback A-Class, the CLA complete with stubby saloon boot requires a little more thought. The parking sensors are a welcome addition, while plenty of assistance for the steering helps matters, as does the good size mirrors.