Low roof is a key element of changes over saloon version 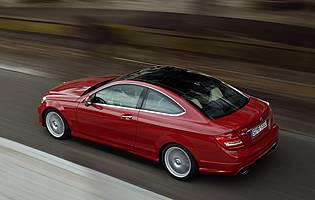 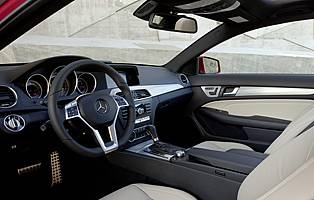 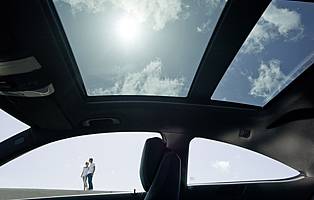 The C-Class has long been pitched directly against its arch-rival from BMW, the 3-Series, with the saloon and estate versions being the most popular choices. However the 3 Series has been available in coupe form for many generations and now Mercedes-Benz has got in on the act with its own take on a two-door four-seater aimed at a more style conscious buyer.

One glance at the exterior of this Mercedes coupe and it is easy to spot the family resemblance. Although a substantial number of exterior panels are new and different from the saloon there is a clear visual relationship. Viewed on its own the coupe looks sleeker than the saloon however, and understandably is closer in shape to the bigger E-Class coupe. The biggest change is arguably the lower roofline, contributing to the elegant stance.

Inside the C-Class is a strict four-seater, although usefully it has just as much loadspace as the saloon and still offers the possibility of folding the rear seat backs for added space. The Coupe also inherits the freshly-revised cabin from the saloon: there's neither the proliferation of buttons and menus that you encounter in some Audis, nor the pared-down minimalism of a modern BMW. Previous owners will feel at home, and new owners will feel that the car is contemporary enough to suit modern tastes.

Available with the latest range of improved engines, the fuel economy and low emissions of the diesels should make them the smart choice among business users. Mercedes' petrol units are renowned for their smoothness and still have plenty of adherents. They're also cleaner but not at the expense of performance.

The driving experience is also enhanced a little over the equivalent saloon. UK cars receive the AMG Sports Pack as standard, which as well as adding a more sporty flavour to the looks adds 18-inch alloy wheels, sports suspension and speed-sensitive sports steering, putting it firmly up against sporty rivals.

Our verdict on the Mercedes-Benz C-Class Coupe C250 CDI

The Coupe is a natural progression of the C-Class range and it certainly brings something to market that would not necessarily be satisfied by the existing bodystyles. Inevitably there are some compromises in terms of practicality over the saloon but the exclusivity, sharper looks and better driving dynamics are a worthy payoff.

It's easy to add thousands to the list price by cutting loose on the options list, but careful model selection should ensure that most of what you want comes as standard. Opting for diesel power could cut your tax and fuel bill, but the increasingly efficient petrol engines shouldn't be dismissed.

The happiest occupants will be in the front seats, with plenty of head and legroom on offer. Those in the back have a decent view out and more than adequate legroom, but headroom is less generous. The boot however is very good, helped by the folding rear seats.

The car's dials and instruments retain a largely conventional layout. Instead of the intricacies of BMW's iDrive system, Mercedes provides some simple, clearly marked shortcut buttons for radio, sat nav and so on along with an easier to use rotary controller. Ditching the predecessor's retracting navigation screen for a fixed item is also welcome.

High levels of comfort are expected of a Mercedes-Benz product and the C-Class Coupe delivers. Even with the stiffer suspension set up the ride is comfortable, the seats are good even in the rear and noise levels are well controlled.

The C-Class could attract unwanted attention from thieves and - more likely - the simply jealous. An immobiliser system is part of the package but an extra tracking system or at least safe garaging is highly recommended.

Mercedes has made a concerted effort to provide a comprehensive package for the C-Class Coupe. The presence of crash-responsive head restraints and numerous airbags is welcome, but many other key features can only be had at extra cost, most notably the various active systems such as the auto brake function. It's good that they are available on a relatively inexpensive luxury car, though.

With the Sport set-up as standard, the C-Class Coupe is only a fraction behind the class-leading BMW. The steering is accurate, quick and full of feel, the brakes are strong and the suspension is both composed and controlled whether pressing on or cruising over broken streets. Engine choice is crucial however to maximise the chassis' abilities.

If you have children who are out of child seats but that have not yet become lanky teenagers the C-Class Coupe could perform family duties. However, fall either side of this window and the reduced access to the rear would become a pain.

While youngsters may appreciate the aspirational qualities of the brand, their interest is unlikely to stretch into a genuine buying decision thanks to the car's 'grown-up' asking price and running costs.

In some ways, opting for a Mercedes can be a predictable choice. The C-Class Coupe can just about justify its asking price, but it won't necessarily make you stand out from the crowd. It is - and so is the firm's expanding line-up - a much better and more polished proposition than one from a decade ago.

Always something of an issue for a coupe the Mercedes does everything it can to help: tilt the front seat forward and it also slides as far as it will go, while the seat belt does get in the way. It's still a relatively small aperture to climb through however, and the less physically able may struggle.

The car's entertainment package is a combination of familiar items seen elsewhere in the Mercedes line-up. One change is the switch from a retractable screen to one fixed lower down in the fascia. You'll have to pay extra for the most sophisticated add-ons. Of particular note is the voice recognition system, plus the easy to use navigation function.

As always more conservative shades suit the taut Germanic style, but brighter shades including white and red also work well with the dynamic looks. Inside a brighter shade for the leather helps to lift the cabin, as well as brighter metallic finishes on the trim.

The C-Class Coupe might be a fairly short car, but the rear window's lower edge is quite high, so care still needs to be taken when reversing although sensors are optional. That aside it's an easy car to slot into a parking space.