This C-Class boasts more aggressive styling than the previous generation 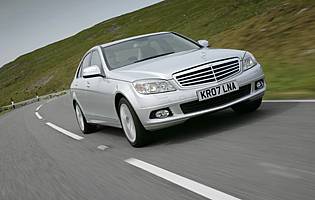 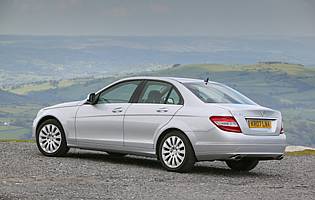 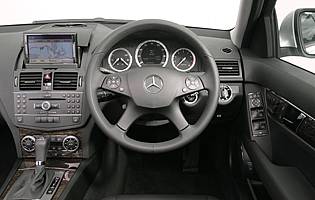 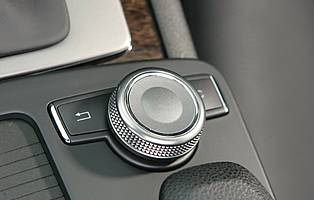 The C-Class is of paramount importance to Mercedes-Benz. Before its launch the company completed the most comprehensive test programme in its history, taking over three-and-a-half years and with pre-production examples clocking up more than 15 million miles.

In order to broaden its appeal to younger buyers, Mercedes-Benz has extended its C-Class range to allow buyers to choose from two types, distinguished by the design of the radiator grille and the positioning of the three-pointed star badge. The classic looking SE or Elegance features softer suspension, a traditional multi-bar grille and bonnet-mounted Star whereas the Sport model has a sportier set-up and a grille minus the bonnet-mounted star badge.

This way Mercedes feels that customers can accentuate individual choices, and configure the C-Class to suit their personal taste. The distinction between Elegance and Sport gives buyers a choice between traditional Mercedes restraint and a more dynamic appearance.

In an attempt to modernise the C-Class, its designers have given it a more athletic profile with a wedge-shaped front end and chunky wheel arches. The new face works well by giving the car a more youthful look. It resembles the luxury S-Class both in style and in substance, thanks to the amount of technology it carries on board.

Overall the C-Class is larger than its predecessor, and its growth has translated directly into providing a more spacious interior. The engine line-up offers customers a wide choice and the two supercharged petrol units offer reasonable pace and rev smoothly. Mercedes has developed the four-cylinder engines to deliver more power and torque plus improve fuel consumption.

This C-Class saloon replaces a model series of which more than 1.4 million units were been sold worldwide since its launch in 2000. The change in design direction plus the improvements made in build quality and the materials used, along with the noticeable shift towards offering a more engaging driving experience should see younger prospective buyers attracted to the brand. Hopefully, though, not at the expense of existing owners.

Other than the initial outlay, owners are unlikely to find long term running costs that great. Certainly, if you focus on the four-cylinder engines you'll be pleasantly surprised by low CO2 ratings and decent fuel economy. Aftersales and servicing cost are up there with the rest of the premium brands, but that's to be expected.

The car's overall growth has helped to free up interior space and rear passengers do benefit from a significant increase in headroom. The same cannot be said for legroom since the bulk of the transmission tunnel takes up valuable space that would have been available for unlucky centre seat occupants. There are several storage options in the cabin while the large boot can easily accommodate a set of golf clubs or a buggy.

The C-Class benefits from a clear central colour display previously the preserve of the luxury-class models. Its major advantage is that all of the frequently used functions can be accessed via a rotary controller positioned behind the gear lever. Although fiddly at first, its operation soon becomes second nature. The buttons on the multifunction steering wheel are also linked most of the car's core functions.

The C-Class's suspension delivers a comfortable and cosseting ride yet affords the car the ability to corner in a smooth and responsive manner. This C-Class has been subjected to more than 15 million miles of testing and it shows, with cabin refinement at high levels and road and wind noise kept to a pleasing minimum.

An alarm system with immobiliser and interior protection is fitted to the C-Class. Remote central locking is also standard, along with a remote boot release function. Owners may wish to supplement the security of the saloon with more visible deterrents although little can be done to counter theft of the three-pointed star, which stands proud on the bonnet of the Elegance and SE models.

Packed full of the safety features expected of a luxury saloon car, the C-Class also provides a driver's knee airbag as part of the seven that are fitted as standard. To reduce the risk of whiplash injury, the head restraints push forwards and upwards during a rear-end collision, while flashing brake lights are activated if the driver brakes suddenly to warn drivers following behind of the potential hazard ahead.

The saloon doesn't give a thrill-per-minute ride but instead provides a good balance between agile handling and solid, reliable performance. Manual gear changes are swift and positive while the car's overall appeal is helped by features such as the hill park assist function on manual gearboxes. The various auto gearboxes are a better choice in the real world and, combined with the willing range of petrol and diesel engines, offer the driver a stress-free way route towards enjoyable motoring.

The C-Class represents a good option for those wishing to purchase an executive family saloon. It offers a good mix of safety equipment, with predictable driving characteristics and a good size boot. Ownership costs shouldn't take chunks out of family finances either thanks to the efficient and tax-friendly range of four-cylinder variants.

New drivers who can afford to buy into the Mercedes-Benz brand should consider a smaller car, such as the A-Class, rather than diving straight into the executive compact saloon car. However, for those who must have a C-Class, then rest assured that the entry-level variants won't prove intimidating.

The fit and finish is top class but there is a disappointing use of some below average materials in the cabin which gives it a slightly cheap feel. Image-wise the C-Class is battling to shake off its association with bland middle-aged men and its more modern styling should now appeal to a wider and more youthful market

The C-Class has a better boot than many of its rivals in terms of space and practicality. All four doors open wide and the driver benefits from an excellent driving position with plenty of adjustment in the seat and steering wheel. Foot well space is compromised in the rear due to the intrusion of the transmission tunnel.

Equipment is generous even on the entry-level model, which has all of the equipment necessary for top class entertainment. Technology such as Bluetooth and voice control for the optional sat-nav system can be selected. Supplementary controls on the steering wheel are a welcome addition, although the basic stereo's display can be hard to read in direct sunlight.

Standard colours are limited to three bold shades. They suit the car well apart from red which is a little harsh for what's supposed to be an executive motor. Metallic paint adds a choice of nine exterior colours and the car retains its handsome looks. There is a choice of fabric or leather for the interior, although the leather is much better quality and more durable than the fabric.

Thanks to its responsive steering, manoeuvring the C-Class in and out of parking spaces is easy. The driving position isn't so low that you can't see the car's bonnet, which also aides parking in the absence of parking sensors. Being a saloon, you'll need to factor in the car's boot into the equation, although parking sensors make a world of difference.

BMW 3 Series Sporty, sleek, fun to drive and the one all its rivals want to beat