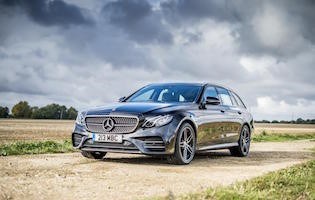 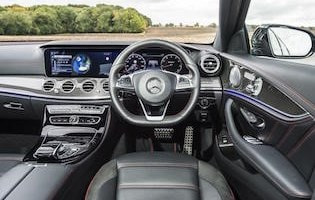 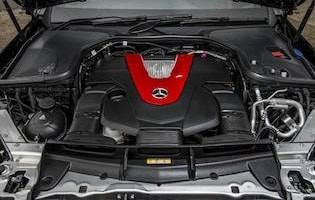 Mercedes-AMG's '43' range of cars is designed to be faster, more technologically advanced version of the company's standard models, but without the wild performance and high running costs associated with the top-of-the-range '63' models. The results are mixed, but in the E-Class the sporty engine is a fine companion.

Under the bonnet sits a 3.0-litre V6 engine making 396bhp, so despite not being one of AMG's hottest models it has more than enough power for most. However, weighing in at 1.8 tonnes it's no featherweight, so performance is brisk rather than ballistic.

The E-Class lags a little behind the BMW 5-Series when it comes to driving dynamics, but the E 43 AMG sharpens things up to offer a decent driving experience. The engine noise, as with all '43' models, sounds very synthetic, but it's a great noise that seems at odds with the large executive car character.

In all other trims, the E-Class's most important skill is long-distance cruising, and thankfully AMG hasn't taken that ability away in its quest for delight in the corners. At motorway speeds with all settings set to Comfort, the E 43 is a quiet and luxurious cruiser.

As you'd expect from a car in this class, the interior is lovely. There's a bucket load of technology such as Mercedes' Comand online system, smartphone integration and high-resolution 12.3-inch multimedia display. However, it's a little closer to C-Class quality than the plush S-Class, with some materials not quite as luxurious as one might hope.

Our verdict on the Mercedes-AMG E 43 Estate

The Mercedes-AMG E 43 is an intriguing prospect. With some of the pace but less of the running costs of the E 63, it seems like great value. However, really press on and fuel economy plummets to around 15mpg, so it's not massively better than its more expensive sibling. That said, it's a brilliant compromise, and will disappoint only the keenest of drivers.

Running costs will be quite expensive on account of this being a arge petrol engine tuned for performance in a big, heavy car. Official figures suggest the E 43 can achieve 32.8mpg on the combined cycle, but in reality you'll be looking at mid- to high-20s depending on whether you can resist the fun, torquey engine's temptations to go faster.

By opting for an AMG model you get most of the AMG-spec interior trim, which can save on optional extras. However, it's a shame that high-spec options such as electric driver's seat, adaptive high beam and LED headlights require buying the Premium Plus Package for £3,895.

Here's where the Mercedes-AMG E 43 Estate really excels. With the rear seats up there's 640 litres of space, but put them down and there's a cavernous 1,820 litres. With so much space and excellent driving characteristics, it makes you wonder why SUVs and crossovers have become the go-to for families that need space.

Mercedes' infotainment system is one of the fiddlier setups to get the hang of, but once you're in the swing of it it's quick and easy to use. The satellite navigation system is clear and easy to understand, while pairing your phone doesn't take long at all. Opt for the optional dual 12.3-inch screens and the appearance of the dashboard is decluttered nicely.

Often when manufacturers add a little performance to comfortable cruisers there's a big compromise on its old character. However, Mercedes-AMG has straddled the line brilliantly, which means that the E 43 retains a lot of the comfortable driving characteristics that make the standard car so enjoyable. Even the AMG sports seats will keep you relaxed on a long drive.

The Mercedes-AMG E 43 Estate comes with remote central locking and an alarm as standard. It also has the advantage of having less extrovert styling than many AMG products, which makes it less of a target for criminals.

The Mercedes-AMG 43 Estate comes with plenty of airbags all around, which means that occupants are well protected should the worst happen. There are also a number of driver aids such as traction control that help the driver keep control even in bad weather. All of this combines to give the E-Class a five-star EuroNCAP rating.

While the keenest of drivers will naturally be drawn to the more ballistic E 63, the E 43 provides more than enough enjoyment to keep those looking for a little extra pace without going to wild. AMG has worked wonders with the suspension so that it always feels under control despite being a large estate, while the engine performance is more than enough for most roads. The only gripe is that its power delivery is unexciting.

For large and growing families, the E-Class Estate is a mighty appealing thing. The cavernous boot means that no matter how much luggage and assorted mess has to come along for the ride with the kids, you'll never be left wanting for space.

Rear passenger space is plentiful too, so even if you need to fit three youngsters across the back they won't be squashed together.

Thanks to the sheer size of the E-Class and the performance on offer, the E 43 would not make a suitable first car. Couple in the fact that running costs and insurance would be extortionate, and the E 43 really rules itself out of becoming any new driver's car of choice.

Mercedes' three-pointed star badge simply oozes appeal, and the E-Class is well known to be a luxurious, premium vehicle. Add in the top-spec AMG badges and the E 43 is a car more than worthy of its place in the premium executive sector.

The interior certainly looks good, and Mercedes has a reputation for building solid cars. The dashboard trim and leather upholstery certainly feel well put together, and despite some minor grumbles about how premium the materials feel, the overall sense of quality is superb.

Thanks to large door apertures and plenty of passenger space, getting in and out of the Mercedes-AMG E 43 should be no trouble at all for most. And the powered rear boot also makes it easy to access luggage space, while a low lip means that it's easy to make practical use of all that space in the rear.

As standard the E 43's stereo system is decent, but Mercedes' Burmester surround sound system is one of the best in the business and should be optioned in if possible. It comes as part of the Premium Plus package, which costs £3,895.

The infotainment system works really well, but the menu navigation can be quite fiddly and takes some getting used to.

As you might expect from a premium executive German estate, the colour palette is rather subdued. There are plenty of dark colours with various greys and blues in metallic and non-metallic options. The E 43's smart styling really suits a brighter colour, though. White really accentuates the car's details, while the classy Hyacinth Red is a stand-out colour.

That said, tight multi-storey spaces might prove problematic due to the sheer size of the vehicle.