Changes the 2008 A-Class exterior are subtle 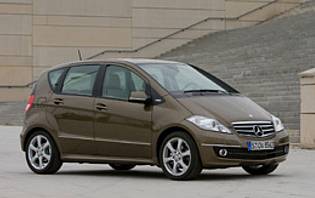 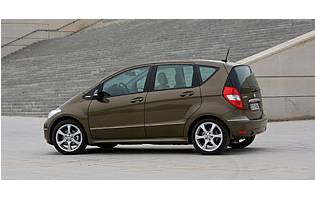 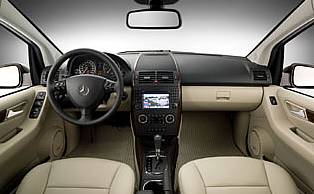 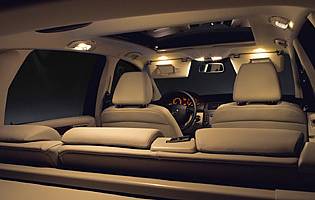 Mercedes-Benz's smallest vehicle has proved that there will always be customers for premium products regardless of the category. The hatchback has found favour with more mature drivers during the last decade and when it came time for a facelift the manufacturer chose not to change too much, concentrating its efforts on a few areas to keep the key demographic happy.

Its lofty driving position and individual shape have always given the Mercedes-Benz A-Class the look of a mini-MPV rather than a hatchback, but in real world terms its closest competitors are the smallest products from any of the premium manufacturers. The flat rear end and short bonnet make it a car more suited to life in the city than most family hatchbacks however, and its ease of use combined with that driving position and the desirable badge have seen it find favour with mature drivers who are willing, or able, to spend the extra.

These key buyers have clearly had an influence on the revisions for the 2008 version of the A-Class. Gone are the more powerful two-litre and turbocharged petrol engines from the UK line-up at least, leaving behind them the 1.5-litre and 1.7-litre petrol engines and a choice of two 2.0-litre diesels. The trim levels have also been chopped down from six to just three, simplifying the range a great deal.

Exterior revisions have been quite subtle, with new lights and bumpers at the front and rear, a redesigned radiator grille and a choice of new alloy wheel designs. Small details such as side rubbing strips have also been changed depending on the trim level. Inside there's a change of fabrics and reworked trim to match the reworked trim levels.

The big changes appear to have taken place under the bonnet, with a start-stop fuel saving system to be available on the two petrol engines from late 2008. Fuel consumption has been lowered across the range even without it. Parktronic, an automated parking system is also available on the new model as an option, as are new electronic aids such as hill hold assist - standard across the range.

Life has got easier and potentially cheaper rather than prettier or more practical for A-Class drivers. The basic new car remains largely the same as the outgoing model and should therefore appeal to largely the same audience. Its premium status and usefulness as a town car or smart second car means it appeals to a different type of driver than the majority of family hatchbacks or small MPVs, but that also means there's little to compete directly against it.

The A-Class is not a cheap car to buy, and additional options can quickly raise the price, but it has traditionally held its value well. Fuel consumption has been lowered in the new generation of engines, but for real savings its worth waiting for the introduction of the start-stop option in late 2008.

The interior feels roomy thanks to a large glass area and the model makes good use of the space available. Realistically, the A-Class will only seat four adults and larger rear passengers may find it cramped on longer journeys. The flat rear end of the A-Class also limits boot space with the seats in place. They do fold flat to carry bulkier items though, at which point the van-like shape becomes a bonus.

The controls and displays will be instantly recognised by those familiar with Mercedes-Benz cars. The one column stalk design is easy to adapt to, and the major functions are well integrated into the limited number of buttons and stalks. Speed sensitive steering is a bonus, offering lightness around town and weighting up a little at speed. Pedals are light and the gear change is slick and direct. The dials are unfussy and convey info clearly and the centre console remains uncluttered and easy to navigate. The controls for the seat comfort package are more sensibly paced than most.

A forgiving ride and well shaped seats makes the A-Class a comfortable car to spend time in. The seat comfort package of the Avantgarde SE also helps the driver to fine tune the interior to their requirements. The COMAND APS system and voice activation also helps take the strain away from driving when specified. Noise levels are low, particularly with the petrol engines, and the A170 will happily sit at speed on the motorway without wind, road or engine noise becoming intrusive.

An alarm, immobiliser and remote central locking are standard for the A-Class. Items in the boot remain out of sight and there's a decent size glovebox for hiding valuables if required.

Safety is well catered for in the A-Class, with ESP and adaptable suspension governing the ride and handling. Braking is also advanced, with flashing brake lights to warn following drivers of emergency stops. Seat belt pretensioners are present on the outer rear seats as well as in the front and two-stage front airbags are joined by head sidebags. Interior lights automatically activate in the event of an accident, and the bodyshell has been constructed with robustness in mind.

The A-Class rides well and handles confidently, but drivers seeking real thrills may be left underwhelmed. The chassis copes very well with town driving, feeling light and nimble in the city, and walks the line between the softness required for absorbing potholes and the firmness required for a stable motorway ride thanks to adaptive suspension. The more powerful of the two petrol engines is a keen performer and, although lacking the torque of the diesel units, can pull the A-Class along comfortably and the driving position is excellent with no obstructions.

For small families or as a second family car, the A-Class will perform well. It has a more grown-up, executive feel to it than some hatchbacks premium or otherwise, and could therefore serve dual purposes as a family and business car well. Limited boot space may become an issue, but with five doors the A-Class certainly makes a safe and practical way to travel with children

The higher than average asking prices and image as a car for older drivers will probably put off younger car buyers, although as a safe and comfortable hatch the A-Class does make sense a degree of sense regardless of age. The fact remains that similarly sized, cheaper and more youth orientated cars are available, and will make more sense to most as first time buys.

The A-Class is certainly not lacking in quality, but due to its smaller size it doesn't carry the same heavy weight feel as some of the German manufacturer's larger models. Fit and finish is excellent and materials feel of good quality, although interior plastics are not as plush as some. The A-Class has earned itself something of a reputation as a car for more mature drivers, something which appears to have done little to harm sales, and the revised version is unlikely to change that, particularly as the sportier engines have been cut from the UK line-up.

The five-door format means there are few issues with accessibility and even though the doors are relatively short, this means that opening them in confined spaces, supermarket car parks for example, is easy. The seats are positioned at a very reasonable height making it easy to hop in and out. The rear hatch opens to wide angle offering excellent access to the boot. With the rear seats down, this will make loading larger items simpler.

Mercedes has revised the infotainment setup for the A-Class range. All models feature a five-inch colour display, MP3 compatible CD player, speed sensitive volume and Bluetooth as standard, put topping the range of optional systems is the COMAND APS. Featuring sat-nav alongside inputs for SD cards, iPods and USB sticks, the system is extremely simple to use and flawlessly integrated. It also comes with improved and highly sensitive voice control not just for navigation, but also telephone and audio systems. The highly intuitive system is simple to use and sound quality is also good.

The trim level range has been drastically streamlined for the facelifted model, giving customers a simplified line-up with clear standard equipment levels. The Avantgarde SE now boasts chrome strips for the exterior, and inside there are brushed aluminium inserts and leather for the steering wheel and gearlever. Revised seat fabrics also make an appearance. Exterior colour choices lean towards subdued rather than outlandish, with 11 shades of blue, silver, black, gold and red to choose from.

The A-Class's excellent driving position, neat turning circle and easy to judge dimensions make it simple to park and to manoeuvre in tight spaces. Mercedes also offers the option of a self parking system on the revised model that not only slots the cars into a gap smaller, according to Mercedes, than any of its rivals, but can use its sensors to select a parking space of the appropriate size. A hill hold function is standard across the range, which also aids parking on slopes.

Alfa Romeo 147 Good looking and with an equally desirable badge

Audi A3 Well built with strong engines but expensive

Volkswagen Golf Practical and smart hatch with a hint of premium

Honda Civic Modern and stylish but less nimble around town