Few changes from standard car at the front 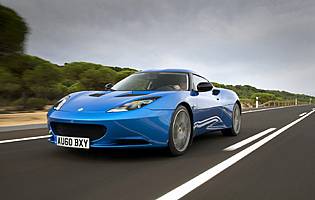 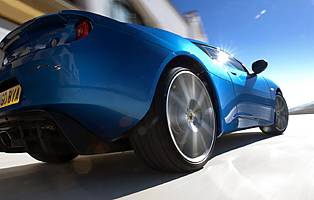 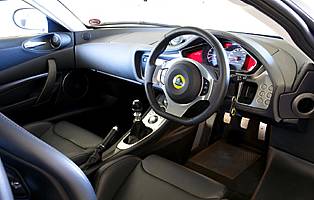 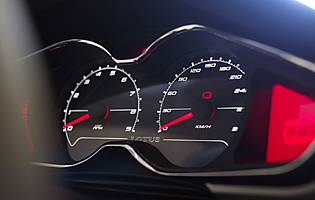 The march of Lotus as a high-end performance car brand continues unabated and, following the successful launch of the new Evora range in 2009, the Norfolk firm has unveiled an important second model. The Evora S brings more power and detailed chassis changes to push the Evora range closer to its key rivals from Porsche.

The secret to Lotus's success in the last decade has been the exceptionally dynamic performance of its Elise and Exige models, which have satisfied the most demanding sports car buyers. However, the highly-focussed nature of these cars meant that Lotus lacked a more refined, larger car that could take on more expensive rivals, but the Evora is the product to fill that gap.

The standard car appeared in 2009 and proved that the basics were in place, with a handsome and modern design, a better cabin, razor-sharp handling and improved quality. Although the standard Evora is quick, it was clear that the superb chassis could handle more power, which is where the Evora S comes in. The S tag, used elsewhere in the Lotus range, denotes supercharged power, and in this instance the standard 3.5-litre V6 is considerably enhanced by the addition of a sophisticated supercharger design.

The power boost has also led Lotus to make changes elsewhere, centred on the suspension and gearbox. The Evora S gets the sports ratio gearbox as standard, an option on the standard Evora model, while the shift action has been tweaked for smoother changes. The suspension has also been revised quite substantially, with changes to the geometry, new front wishbones, revised damper rates and stiffer suspension bushes. The Evora S can also be specified with 19-inch front and 20-inch rear alloy wheels fitted with bespoke tyres.

Visual changes to the Evora S over the standard car are limited, with a more prominent rear diffuser and the larger optional alloy wheels being the only obvious difference.

Our verdict on the Lotus Evora Evora S 2+2

The addition of a supercharger has done much more than simply add performance to the Evora. It finally pushes the capabilities of the rest of the car, something that the naturally aspirated engine cannot do. Despite the scintillating performance and highly capable chassis, it also offers impressive comfort if not complete luxury. It therefore offers a complete package and one that stands square on to its key rivals.

Running costs will inevitably be high, although the Evora's relatively light weight means that it is capable of delivering respectable economy and emissions figures despite the performance. Insurance costs will be the biggest issue for potential buyers.

The Evora can be specified with just two seats or as a 2+2 with two occasional seats in the rear. In either case the rear space is best used for luggage: the rear seats are small and suitable only for short journeys. The boot is behind the mid-mounted engine and so is accessed through a relatively narrow slot. Storage space inside the cabin is quite limited too.

The Evora has a different instrument pack and dashboard layout to other models in the Lotus range, and it is a significant improvement. The main instruments are attractive and clear, and are bordered by two electronic displays which offer a multitude of information. Supplementary switches are also placed handily on two pods behind the steering wheel, although this does mean that some of them are hard to identify.

Given the impressive nature of its handling, the comfort delivered by the Evora is remarkable. Despite the absence of body roll in corners, bumps and lumps in the road are easily soaked up and it is almost never thrown off line by imperfections in the road. Although the driver is aware of the condition of the road it rarely disturbs the cabin occupants. Noise levels are respectable if not class best, but overall the Evora is much more comfortable than many would expect from a car of this performance.

A standard alarm and immobiliser system will help keep this desirable car in the right hands, although its rarity should mean it is unlikely to feature on the list of thieves' most wanted.

With high levels of grip, performance and stability the Evora has a high level of activity safety, assisted by a new suite of electronic devices including ESP, ABS, traction control and an electronic differential lock, which can be switched off in stages. The strong chassis design should also provide high levels of passive safety in the event of an accident.

At the heart of the Evora's appeal is the way it drives and just like every Lotus there is a distinct focus on a balanced chassis, communicative, accurate steering and a well-sorted suspension. For the driver it makes the Evora a real pleasure to drive as it responds to inputs faithfully and has no obvious vices. The improvement with Evora S comes with the flexibility of the engine, which means the driver can enjoy the handling and blast between bends without having to work the engine so hard, making it less stressful to drive as well as quicker.

Only children of a certain size could fit in the back seats of the Evora: too small and they would need child seats that would not fit, too big and they would run out of room altogether. Few families could manage with the Evora as their sole car.

The Evora S is far too quick and expensive for a new driver, and would also be virtually impossible to insure for someone with no driving experience.

One important thing that Lotus has improved over the years is the quality of its products, and the Evora is the most recent example of this. Fit and finish are noticeably better than before and although it is still not as good as the best in class, it will be sufficiently good for many buyers. Image is not something Lotus has a problem with, as its products are seen as very focussed and with a good pedigree. The only demerit is that some still regard Lotus products as somewhat unreliable.

Although bigger than other Lotus products, getting in still requires the driver or passenger to stoop down quite low and getting the trailing leg into the footwell can be awkward for taller people. Access to the rear is even more restricted, and the back seats (if fitted) are suitable only for short journeys.

Specify the optional Tech pack and the Evora S comes with a seven-inch touch screen audio system with Bluetooth, MP3 and auxiliary connection plus much improved sound quality. It also comes with a reversing camera, making this option one definitely worth taking.

The Evora's slick and modern exterior design works equally well with subtle shades or much brighter colours such as the sharp yellow and blue. On the inside the addition of leather trim works well with the brushed metal dashboard elements.

With limited visibility to the rear, a low seating position and the slimmest of bumpers, parking the Evora can be a little stressful. However, the optional reversing camera is a big help and the Evora remains a relatively compact car.

Porsche Cayman S Well-built, sharp and better value than a 911

Jaguar XK A luxury GT that can still entertain, aimed at older buyers