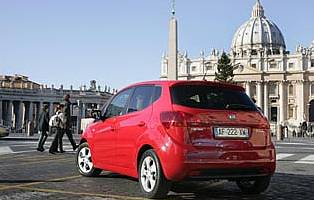 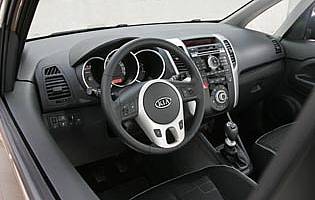 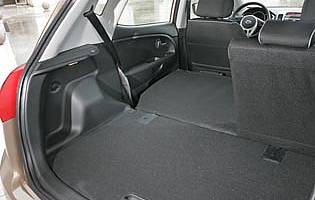 For the majority of manufacturers the small car market is the place to be. With the prospect of large volumes, it's possible to be successful. However, with so much competition, the need to produce something different has never been greater. Kia already took this approach with the Soul, and has followed it with the Venga.

With its lofty stance over a conventional compact hatchback, Kia's Venga promises to be a more accommodating a practical vehicle. This isn't the Korean firm's first attempt at an 'alternative' compact hatch. Its Soul took everyone by surprise, and Kia has admitted that's not for everyone - which is where the Venga comes in.

The first car in Kia's range to truly demonstrate the company's new, more European influenced design direction, the Venga sports a distinctive grille that created a connecting influence to the second generation Cee'd and Sorento models. Vastly improved quality of materials and design execution in the cabin complete the visual advances made since the breakthrough Cee'd made its UK debut.

Mechanically the Venga might not appear to be that advanced, but the inclusion of a clean diesel engine boasting stop-start technology plus a ride and handling package devised specifically for the UK market should convince buyers that the Korean brand means business.

And as a family car for buyers with a modest budget, the Venga makes a lot of sense. The headline grabbing seven year warranty is a genuinely attractive proposition, while the durable cabin is also spacious and practical. Factor in good levels of standard equipment and it's a car that has the mainstream European opposition rightly concerned.

Our verdict on the Kia Venga 1.4 CRDi Venga 2 EcoDynamics

For all the headlines grabbed by Kia's funky-looking Soul, the Korean company's other left-field compact hatch deserves an equal amount of attention. Positioned to appeal to small families and active types not wishing to spend the earth, it offers plenty of space and a few interesting features. Kia's recent focus on more economical engines has paid off with a good value diesel unit, and the car lives up to its 'designed, engineered and built in Europe' tageline thanks in part to handling that was fine tuned in the UK.

With its modest asking price and generous equipment levels, the Venga makes a lot of sense for small families on a budget. There's no obvious compromise either, while the car's seven year warranty is another major plus point that the competition have failed to match. Factor in the diesel variant if fuel economy and low VED rates are important to you.

With ample oddment space dotted around the cabin - it's all relative given the Venga's size - Kia's compact hatch easily swallows a growing family. With rear legroom better suited to children than adults for long journeys, head, leg and elbowroom is more than adequate all-round. The easy job of folding the rear seats liberates more load space, which is par for the course for a car of this size.

There's little to complain about in this department - Kia has for some time now designed and built aesthetically pleasing and ergonomically sensible cabins. The Venga's main instruments and displays are easy to use and clear respectively, while it also proves straightforward to control a music player connected to the audio unit.

With a full complement of adults aboard the Venga is what you call 'snug'. More at ease with children in the rear seats, there's never a feeling of discomfort. Supportive seats and, for a small car, only a modest amount of engine, tyre and wind noise, the Venga is surprisingly refined and competent.

Don't go expecting fancy alarm systems here. That's not a criticism just stating the obvious when discussing a modestly priced car. Aside from the usual remote central locking and immobiliser, there's enough covered storage space to ensure your belongings stay safe. If you're really concerned, a visible deterrent such as a steering lock might prove a worthwhile investment.

There's little out of the ordinary to report here as the Venga is equipped to levels that we've come to expect from family cars these days. With enough airbags and electronic aids to keep you safe, Kia's compact people carrier is a competitive proposition.

Packing a selection of low capacity engines, it's fair to say that the Venga is no ball of fire. That said, it has no trouble keeping up with the flow of traffic or maintaining a steady motorway pace. Agile thanks to its compact dimensions, the Venga is easy to pilot and does a good job of dealing with poorly surfaced roads. The steering is accurate and the manual gearshift is slick and precise.

Although no match for a conventional compact MPV, the Venga acquits itself well to the task in hand. If you have a young family there's ample space in the rear for the children, while boot space is good for a car of this size. Cabin materials looks and feel durable - a good thing if you're an active sort or so are your children.

There's every reason to embrace the Venga as a first car, especially if you've just started a family. Its compact dimensions make it easy to manoeuvre, while the light controls and moderately powerful engines are unlikely to intimidate first timers. Factor in modest running costs and it starts to make a lot of sense.

Packing a seven-year warranty, it's clear that Kia has every confidence in its product. This is a feature of an increasing number of Kias, and has done much to build buyer confidence is a comparatively short space of time. There's still some way to go regarding the tactile experience, although much progress has been made of late. Hard plastics still exist in the cabin, but there's no question over durability.

With its wide-opening front doors and raised seating position, front seat occupants should have an easy time accessing and exiting the Venga's cabin. And although the rear doors don't open as wide, only those with mobility issues are likely to experience a serious problem. At the rear the car's tailgate requires little effort to raise or lower and the load lip is a sensible height.

The basic offering in the Venga is hardly basic; it's easy to use and delivers a high quality audio performance. With the ability to connect an MP3 player plus directly control and iPod, there's not much else even a demanding audiophile would want. Even the optional factory-fit sat-nav unit is easy to use.

As befits a car targeted at the family market, bold, bright external colours work best. Combined with the Venga's many exterior styling details, it's a car that's been designed to stand out from the crowd. It's almost business as usual inside though, as familiar Kia plastics and colours dominate - they're durable but could be more exciting.

A compact car by current standards, parking the Venga shouldn't pose any serious problems. Its upright stance and raised driving position both make life easier, and contribute to the car's good all-round visibility. Light but accurate steering completes the picture.

Fiat Panda Another high-rise compact hatch, and one that's both competent and popular