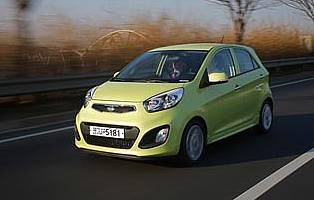 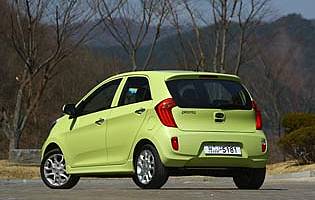 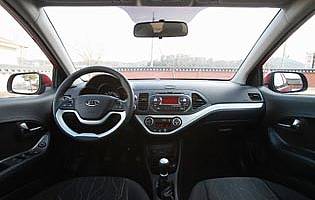 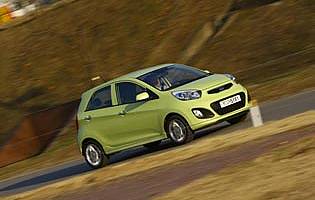 Something of a success story for its Korean maker, the Kia Picanto's appeal cannot be purely based on asking price. With an increasing number of small, inexpensive cars on the market now, quality, looks and durability are all just as important. And it's these attributes that have helped to make the Picanto a popular choice.

Despite this new car's slight increase in size, one of the key appealing features of the Picanto remains its compact dimensions. Although no longer genuinely a small car in the traditional sense of the word, it remains compact and obviously best suited to urban environments.

The changes to the car are substantial inside and out. In keeping with Kia's new design philosophy, the Picanto's bold lines and fuss-free sheetmetal make it stand out from an otherwise me-too supermini crowd. It's a similar story inside the Picanto, with considerable evidence of an uplift in material quality and more bold design cues.

Being a little bigger means there's a little more space for occupants both fore and aft. There's also more standard and optional equipment available, which is what buyers now expect. Long gone are the days of slumming it in a budget tin box. This policy includes the Picanto's safety provision, which brings it up to big car standards with six airbags.

And like so many new cars, there's a greater focus on economy and reduced emissions. The Picanto's two petrol engines - a three-cylinder 1.0 and a four-cylinder 1.25 unit - boast improved performance in every department. Crucially, the smaller unit's been rated at 99g/km CO2 - an important number in today's ever tightening emissions-based tax system. The 1.25 variant isn't far behind (109g/km), and can be had with an engine stop-start system which reduces the figure to a creditable 100g/km.

This modern-looking Picanto is a considerable and welcome step up from the original model. Kia has done a good job of boosting actual and perceived quality levels, while keeping a lid on the car's all-important wallet-friendly pricing strategy. Practical in five-door form and no slouch despite its modest capacity engines, the Picanto deserves to be compared favourably to its European rivals.

Running costs for the Picanto will be low. Aside from the low purchase price, insurance and fuel costs will be minimal whichever engine option is selected. The 1.0-litre car's tax exempt status is certainly an added attraction.

Every inch of the Picanto's interior space is put to good use, and four adults can be accommodated easily, five if necessary. The boot is tall rather than long, but still boasts a maximum capacity of 870 litres when the rear seats are folded forward. Oddment capacity up front is also good.

With its refreshingly simple layout, the Picanto's cabin lacks the clutter of some its more established rivals. The instruments are easy on the eye, while the adjustable steering column and seat height adjustment make it easy to find a good driving position. The audio unit's controls are intuitive, while the connections for music players don't get in the way.

The Picanto makes a good fist of coping on broken roads thanks to its supple suspension and small wheels. Refinement is also good considering its size: higher speeds do produce more wind and road noise, but around town it is more than acceptable. Occupant space is also good, with little chance of elbows clashing despite the cabin's modest dimensions.

Even the base model Picanto comes with an engine immobiliser as standard, while models above it in the range come with a remote central locking system plus alarm. At this level there's little need to go mad with extra security, although a visible deterrent - a steering lock, perhaps - is no bad thing.

All Picanto models come with ABS with electronic brake force distribution as standard. What's really impressive is the seven airbags as standard on every car - event he entry-level model. Some more expensive European models can't match this, which shows how serious Kia is when it comes to safety and offering value for money.

Progress in the Picanto is comfortable and brisk rather than rapid, but the willing petrol powerplants never feel underpowered. The big surprise is that the 1.0-litre is so close to the larger 1.2 that it may be enough for most buyers. Even on the motorway the smaller unit is easily capable of maintaining the legal limit. Noise levels are good too, with the three-cylinder 1.0 emitting a tuneful, offbeat sound. Overall, the whole experience is undemanding with light steering and gearchange worthy of a mention plus excellent visibility and clear displays. On twisty roads the Picanto can be fun, with modest grip and responsive steering.

While smaller families will find the Picanto's practicality useful, squeezing more into the Kia's compact silhouette might prove a struggle for larger families who would be better off with a compact MPV or larger hatchback.

The Picanto as it offers the right ingredients for a first car. Low purchase, insurance and running costs are a big plus, as is the car's easygoing nature. The various controls offer plenty of assistance, making the driving experience straightforward and enjoyable.

It used to be the case that cars at this price point weren't normally associated with quality, but this second generation Picanto does not feel like a cut-price car. The cabin materials are decent and build quality is good. The Picanto's bold styling helps its image, and there's a lot to be said for any car maker offering a seven-year warranty for added peace of mind.

In five-door form, access to the Picanto is simple for passengers front and rear. Predictably, it's better for front seat occupants but those in the rear won't be hugely compromised. Despite its size, the high roofline makes it easy to get inside and the boot lid opens high and wide to make loading and unloading straightforward although there is a small load lip.

The Picanto comes with a good quality audio system on all models. The entry-level car boasts a unit with all the basic functions, while '2' variants and above gain a fully featured unit complete with Bluetooth and iPod/MP3 connectivity. The various controls and displays have been well thought out, too.

Exterior colour options are a mix of bright and bold primaries and more sober hues to cater for most tastes, with the former making a welcome and bold choice. Inside, the airy cabin delivers a welcoming ambience, although some of the plastics are hard to the touch.

With its compact dimensions and excellent visibility, the Picanto makes perfect sense when it comes to parking. The light power steering makes short work of moving into tight spaces and the slightly raised driving position helps with over-the-shoulder visibility.

Hyundai i10 Direct rival and also a good all-rounder