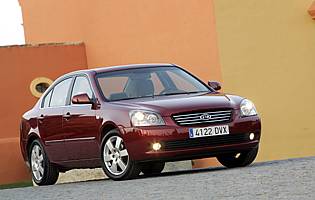 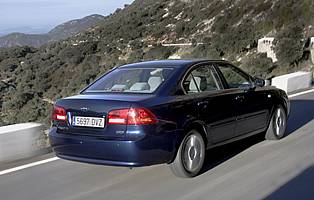 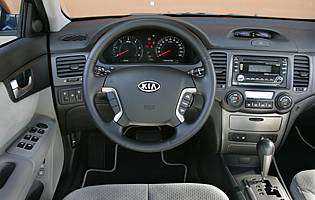 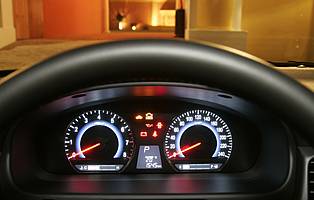 Continuing the series of revitalised models from Korean firm Kia, this Magentis is an all-new contender in the D-segment of mid-sized executive cars. With big improvements claimed in all areas compared with the outgoing model, plus the adoption of modern technologies, the second-generation car is designed to offer improved driver satisfaction alongside the value for money that is a feature of Kia products.

Building on its success with high value cars, the Magentis aims to satisfy the buyer who is looking for a big car without a similarly sized price tag. Competing against more mainstream rivals, it has a difficult job to win over newcomers to the brand on merit alone, but with strong pricing it is likely to make many buyers think twice when it comes to signing on the dotted line.

This all-new design was created jointly by Kia's design teams in Korea, Europe and the US, and the various influences of those countries can be seen in the shape. From the side view, the Magentis looks impressively clean and modern, with a smooth, if conventional shape. From the front and rear, however, it is less impressive, with a lack of distinction despite a pronounced grille and three dimension-effect headlamps.

The Magentis benefits from a range of new and improved engines, notably a revised version of the 2.0-litre diesel engine first seen in the Sportage. With the essential diesel engine in the Magentis for the first time, it should appeal to a wider range of buyers thanks to improved economy. Also new to the range are the freshly-developed 2.7-litre V6 and 2.0-litre petrol engines.

A further development for the latest Magentis is the adoption of a multi-link suspension system at the rear, mounted on a subframe to reduce noise transmission to the cabin. While offering increased ride quality, the sophistication of the system is somewhat diminished by the damper settings, which allow too much float in certain road conditions.

Our verdict on the Kia Magentis 2.0 GS

Playing to a distinct market, the Magentis meets all the right criteria for its typical buyer. High value, high specification and low running costs are all factors. Less appealing is the road performance and interior quality, but for many this will be less of an issue when compared on price with the opposition.

With a competitive purchase price and a high standard specification, the Magentis represents a low cost option for a car of this size. Choosing the diesel option will also bring down fuel bills, while the only question mark hangs over the likelihood of high depreciation as a proportion of the initial price.

A key benefit of the generous dimensions of the Magentis is the amount of room on offer, with both front and rear passengers well catered for. Leg and elbowroom are very good for all occupants, although the sloping roofline does restrict headroom for taller passengers in the rear. The boot is large enough to accommodate a good deal of luggage, while several storage areas in the front, including a useful centre armrest box, leaves plenty of room for oddments.

The simple layout of the Magentis makes it an easy car to operate, with large dials for the air conditioning, and large, clearly marked buttons on the stereo. Steering wheel controls also allow easy adjustments on the move. The Magentis uses white and blue illumination for the first time on a Kia, and it gives a clear display as well as looking more attractive than conventional colours.

Both front and rear seats provide a good level of support, and combined with the generally smooth ride, the Magentis can deliver a class-competitive level of comfort. The only demerit is the pitching motion which can be caused by road irregularities at speed, but overall the level of comfort is good.

As standard, all Magentis models are fitted with an engine immobiliser and remote central locking for improved security. Higher-specification versions come with keyless entry, while a battery saving device shuts off any interior or exterior lights that are left on to prevent the battery from draining and leaving the vehicle open to attack.

Six airbags and ABS as standard, plus the availability of ESP on higher-specification models gives the Magentis a good standard of passive and active safety. The toughened bodyshell uses high strength steels, designed to offer improved crash performance. Active head restraints are also fitted to the front seats.

The all-new 2.0-litre diesel engine provides respectable performance in the Magentis, especially given its dimensions. A good torque figure gives decent acceleration through the gears, although this is tarnished by an inconsistent clutch action, making it slightly awkward to feed in the power. The Magentis is clearly biased towards comfort, and the soft suspension soaks up bumps and broken roads well, though over longer humps the lack of adequate damping is displayed by an excessive pitching motion, becoming more pronounced at speed. In most conditions however, the Magentis performs respectably.

Although the saloon configuration will prevent more awkward loads from being carried in the boot, the amount of space on offer in the Magentis makes it a good family car. The generous standard specification and competitive price is likely to make it a strong choice for family buyers looking to get the most car for their money.

In terms of price, the Magentis offers a big car for the money, which gives it strong appeal for first time buyers looking for something of this size. Also backed up by a comprehensive warranty, it offers peace of mind for newcomers to the business of car ownership. Economy and insurance levels are also respectable for a car of this size and performance.

As one of the more recent cars to come from Kia, the Magentis shows further progress in terms of quality. The exterior of the car looks well finished, but the interior can't quite reach the same standard. Some cluttered design and average plastics let down what is a well-constructed car. The image of the Magentis is helped by the exterior styling, which although relatively anonymous at the front and rear, has a smart side profile which is European in feel. With a price structure designed to undercut competitors, the Magentis will retain a value-biased image.

Few passengers are likely to struggle with entry to the Magentis, with the long wheelbase, large doors and generous interior room making entry and exit easy. Keyless entry is also fitted to the high-specification model, and a well-shaped boot lid leaves a wide aperture for easy loading.

A standard fit radio/CD unit is installed in the Magentis, and its double DIN size makes it easy to operate. Some of the buttons feel a little flimsy, but the sound quality is respectable whether listening to the CD audio or the radio output.

The Magentis uses a small range of dark colours inside the cabin, but more of an issue is the variety of grains and types of plastic used. It creates a haphazard feel to the dashboard, and highlights the number of different parts used to construct the interior. The trim itself is of a reasonable standard, although some surfaces feel of a poorer quality compared to others - the leather on the steering wheel feels thin, whereas the leather on the seats is much better.

Even without the optional parking sensors, getting the Magentis into a parking space is no chore. The steering is easy to turn while stationary, and good vision forwards and backwards plus large door mirrors create few blindspots.

Full size spare fitted as standard beneath the boot floor.

Peugeot 607 Comfortable ride and high spec but uninspiring to drive

Citroen C5 Smooth riding, oddball design not to all tastes