Iconic grille is a Jeep trademark 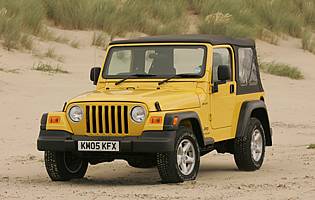 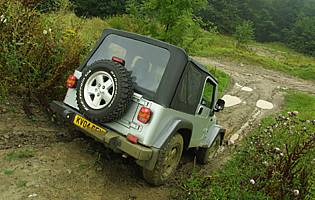 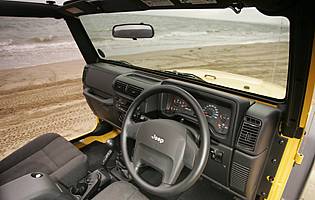 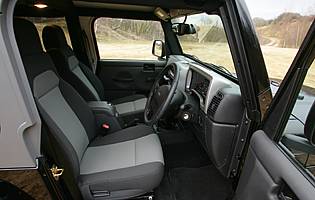 The Jeep Wrangler is one of the most recognisable 4x4 vehicles ever produced, with its roots running right back to the original Jeep of the 1940s. Introduced to refresh the range, the Jamboree model is a limited edition, which replaces the outgoing Sport model, and boasts a comprehensive specification and lower price tag.

Often seen as the original 4x4 vehicle, the Jeep brand lives on in its most pure form in the Wrangler. With a clear visual link between it and the original 1940s Jeep, the Wrangler has a strong following all over the world, and with constant updates and upgrades, the modern iteration can keep pace with newer rival designs. This Jamboree model offers improved specification to tempt new buyers to the brand.

The Jamboree replaces the outgoing Sport model and receives a generous equipment upgrade, getting alloy wheels, cruise control, air conditioning and a seven-speaker radio CD as standard, bringing it much closer to the other models in the range in terms of specification. Distinguishing it from the rest of the range are the grey wheelarches and Jamboree badges.

Mechanically this Wrangler is identical to the rest of the range, with a 4.0-litre straight-six petrol engine mated to a six-speed manual gearbox. The four-wheel drive system has three operating modes, with two-wheel drive for most on-road conditions, with high range and low range four-wheel drive available by shifting a secondary lever in the cabin. This can also be done at up to 55mph, avoiding the need of some systems to stop before the change can be made.

The Wrangler is also constructed for serious off-road use, with a separate 'ladder' chassis design, rather than the unitary construction that is common on most cars. This allows greater articulation for the suspension, giving the Wrangler superior climbing ability and reducing the likelihood of grounding in extreme conditions.

Our verdict on the Jeep Wrangler 4.0 Jamboree

For its dedicated fans, the Wrangler remains the original 4x4 vehicle, and no modern interpretation can match its mix of style and ability. More discerning buyers however may find its relative crudity off-putting, and the temptation of something more civilised and good looking for similar money may make more sense.

The Wrangler should prove to be reasonably straightforward to run, thanks in part to a sensible purchase price and affordable insurance costs, although the 4.0-litre engine is likely to be thirsty.

Given its compact dimensions, space for front seat passengers is relatively good, while in the rear headroom and legroom is slightly more restricted. With the rear seats in place the boot is small and upright, although in terms of practicality the Wrangler is a success, thanks to features like the hose-down interior, drainage plugs in the floor and removable carpets.

The layout of the Wrangler's cabin is simple and clear, with plain white on black instruments that are easy to read. The dashboard is also simple, with rotary controls for the heating and ventilation and push buttons for the stereo system. The graphics are quite dated, but this does not impact on how easy to use they are.

The comfort on offer in the Wrangler is reduced by the amount of wind, engine and tyre noise, while the fabric roof on the Jamboree version does not succeeded in creating a cosy cabin. The seats are relatively flat, but offer decent comfort, while the addition of air conditioning is useful.

The Wrangler comes with an engine immobiliser and locking wheel nuts as standard, although the fabric roof means it is less secure than the hard top roof fitted to other Wrangler models.

The Wrangler is fitted with twin front airbags as standard, three point seat belts on all four seats and ABS. In comparison with more modern vehicles the Wrangler's more traditional structure means it is likely to perform less well in an accident.

The high driving position is a boon in traffic, allowing a good view of the road ahead. The 4.0-litre engine provides good torque, although acceleration feels more languid than the official figures suggest and there is a fair amount of noise in the process. The six-speed gearbox is slow shifting but positive, although the biggest issue is the steering, which lacks feel, is vague and low geared, requiring plenty of inputs on the road. Off-road the Wrangler comes into its own, with impressive climbing ability and grip.

With seating for four, the Wrangler could perform family duties, and the removable rear roof section also allows the pleasure of top down motoring. However, with the rear seats occupied boot space is restricted, reducing its ability to cope with a full sized family. The relative lack of comfort may also restrict the Wrangler's usefulness as a family car.

The Wrangler could pass as a first car, but its vague steering, poor manoeuvrability and thirst would make it quite a handful for an inexperienced driver.

The Wrangler struggles in terms of quality, as although it feels sturdily built, many of the materials used feel quite cheap. Undoubtedly they are rugged enough to cope with off-road work, but for many using the car solely on road it will come as a disappointment. The Wrangler's image is heavily built on its American roots and its ruggedness, which gives it a strong appeal for some.

Getting access to the Wrangler is slightly more difficult than a regular car, thanks to the high ride height and floor. The short doors open wide, while access to the rear seats requires the front chairs to be folded forward.

A CD player and radio tuner with seven speakers is fitted as standard to the Wrangler, which provides reasonable sound quality. It has clear buttons and displays, and also benefits from remote controls on the steering wheel spokes.

The interior of the Wrangler is finished in dark grey cloth trim, with black plastics throughout. This gives the cabin a dark feel, and the quality of the plastics is only average.

The Wrangler has good visibility thanks to its upright stance, making it easy to place on the road, but although it has power steering, the amount of lock available is poor, making it relatively difficult to get in or out of a parking space.

Full size spare wheel is mounted on the exterior of the tailgate.