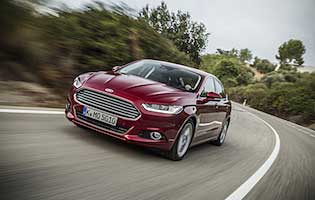 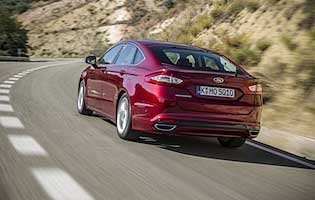 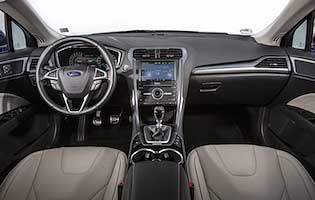 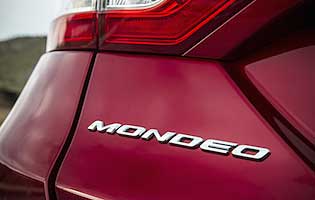 The gradual evolution of the Mondeo continues with this latest model. With its more extrovert exterior look and Ford's desire to move the model upmarket, it's a slightly different proposition these days. That said, it retains its keen driver appeal and the Blue Oval has worked hard to provide a comprehensive range of quality, economical engines.

Ford would happily admit that this generation of Mondeo should have arrived much earlier than it eventually did. A series of delays ensured that the American market car broke cover first and enjoyed around three years of exposure before this European variant was ready for market.

There's no question that this delay allowed the Mondeo's rivals to take the lead, but once this latest mid-size Ford finally hit the showrooms its was clear that Ford's conservative approach was justified.

The end result was a car boasting more comfort and safety kit than before, with the latter easily rivalling systems available on much more expensive cars. The Mondeo's integrated infotainment system has been completely redesigned and is now one of the most intuitive on the market.

And in keeping with its rivals, this Mondeo boasts a solid line-up of clean and efficient engines - both petrol and diesel. Mainstream models are likely to powered by a new family of 1.5-litre units, which would have been unheard of only a few years previously as small capacity engines were viewed as not up to the task.

Our verdict on the Ford Mondeo 2.0 TDCi Titanium 5dr

Buyers waiting for this new generation Mondeo have been rewarded for their patience with a car packed full of premium-level features and a striking new exterior look. Dynamically the car's bias might have shifted more towards the comfort end of the spectrum, but keen drivers can still have plenty of fun - as you'd expect from a Ford product. In hatchback guise the car is a consummate all-rounder, offering ample space and practicality for the vast majority of owners.

Priced competitively the Mondeo boasts more kit than its predecessor, which should help boost its value for money status. Factor in the car's more efficient engine options and running costs should be modest. It's worth remembering that some of the car's more advanced comfort and safety features are cost options, though.

Weighing in at the top of its market segment in terms of size, this latest generation Mondeo offers generous levels of cabin and load space. Occupants fore and aft should have no complaints, while the car's spacious boot boasts a modest load lip and rear seats that fold with little effort. Back in the cabin there's ample oddment storage space but some rivals have put more thought into design and execution.

The car's main dials are clear and easy to read but the central trip compute does take a little time to learn as there are more than a few pages of information available. The new central colour touchscreen is a big improvement and proves to be an intuitive interface for the audio and navigation functions. The Mondeo's minor switchgear is located where you'd expect it but some drivers might be put off by the number of buttons on the steering wheel.

As Ford continues to move upmarket with the level of refinement baked into its cars, this generation of Mondeo delivers a noticeably improved level of comfort over its predecessor. The large cabin ensures occupants never feel cramped, while road and tyre noise is pleasingly low at all speeds.

All of the usual security features are in place, from remote central locking to a comprehensive immobiliser and alarm system. For added convenience, a 'keyless-go' system is available, which allows you to keep the key in your pocket at all times. The Mondeo also features covered storage inside the cabin and the boot contents remain concealed thanks to the hatchback's sturdy load cover.

Alongside the expected array of airbags and basic electronic stability systems, Ford makes available a considerable number of intelligent systems such as active braking and intelligent cruise control, high power headlights a blind spot warning system. You'll need to pay extra for some features, which might be frustrating if you're ona budget or choosing a company car.

The Mondeo has always had a reputation as the choice of the keen driver and this model should be no different. Although refinement and comfort levels have been raised to compete with more upmarket German rivals, there's still ample scope to have fun. All engine options prove to perform well, but predictably it's the torquey diesels that shine the brightest. Factor in steering, gearshift and brakes offering good levels of feedback and control weight and its easy to see why the Mondeo remains a good choice.

If a people carrier or SUV doesn't appeal the Mondeo is a reasonable alternative. The cabin won't be as versatile and the cabin trim will likely be more plush, but if you want to stick with a conventional car the Mondeo offers ample cabin and boot space. If you want even more flexibility there's always the estate version.

It's unlikely that the Mondeo will appeal to the first-time car buyer. Running costs will likely be too high for a new driver and its size is a little big for someone who's just stepped out of, say, a Fiesta learner car.

Recent years have seen Ford attempt to move steadily upmarket with its mid-size and large cars. The Mondeo, like the Focus, now boasts a premium cabin, numerous features previously only seen on more expensive models and exterior styling that apes more expensive executive models. And as the Mondeo has become more 'premium' so has the driving and ownership experience, making it a more credible alternative to the likes of Volkswagen's Passat.

As a family car the Mondeo needs to be easy to live with and it proves to be a practical and versatile proposition in hatchback guise. The doors are long enough to provide significant apertures to allow easy ingress and egress, and the large hatch tailgate requires minimal effort to operate.

New for this generation of Mondeo is a completely overhauled infotainment system, complete with large colour touch screen. Navigating the various features is more intuitive, while there are more connectivity options to boot. Voice control and Ford's own Sync system are both better implemented here also.

Bold colours do much to compliment this Mondeo's equally bold new exterior look. There's less brightwork on show than its predecessor and the car's overall appearance is more refined and less fussy, which should please more people. This more refined approach continues inside, although the plastics used could be of a higher quality. At least the chosen upholstery materials help lift the cabin ambience.

The Mondeo, even in five-door hatch form, isn't a small car but it boasts plenty of steering assistance and good levels of all-round visibility. Parking sensors and a reversing camera, where fitted also help. And, if you choose to add the parking assistance system, the car will not only parallel park automatically but also slot into 90 degree spaces and extract itself from a space.