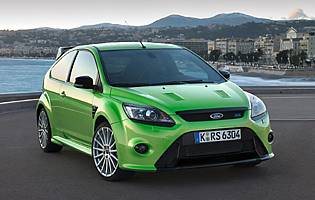 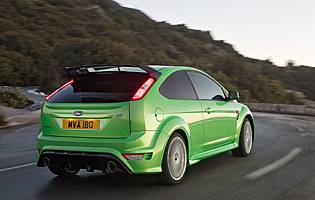 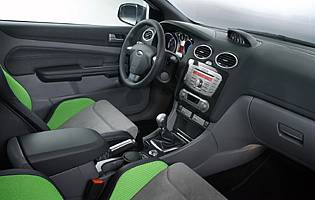 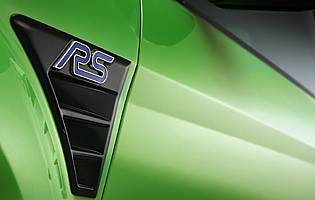 The second generation Focus has a successful performance version in the form of the ST, but the arrival of an RS version signals Ford's intent to create a 'halo' model that will capture the imagination of enthusiasts, just as previous models wearing the legendary tag have done before.

It's easy to take Ford's Focus for granted - many owners and drivers do so on a daily basis. This is no bad thing, though, as it only serves to highlight the car's ease of use. The previous generation Focus RS was quite a hard car to live with on an everyday basis, but the new version is intended to be more usable. Crucially, Ford has chosen not to sacrifice that final tenth of driving appeal so loved by hard-core enthusiasts though, and the latest RS showcases a number of significant changes compared to the ST model in order to enhance its abilities.

From the outside, the RS certainly looks the part. It is a notable step forward over the ST and is unlikely to be mistaken for one, thanks to a substantial bodykit. Deliberately echoing the looks of the Ford World Rally Car, the Focus RS has a large double rear spoiler, a deep front bumper and unique alloy wheels.

On the inside there are also some changes, although the overall look is much the same as a conventional Focus. The biggest change is the seats, which are Recaro bucket-types as standard, offering excellent comfort and a high level of support. All Focus RS models also get carbon-fibre trim on the dashboard and upgraded trim, although features like climate control and Bluetooth phone connection only comes as options.

Of more importance however are the mechanical changes compared to the Focus ST. With 300bhp going through the front wheels, Ford has made a number of changes to ensure that power is transmitted to the road without affecting the steering. To this end it developed a system called RevoKnuckle, which maintains the correct suspensions geometry even when the wheel is turned in order to minimise unwanted torque steer.

Our verdict on the Ford Focus Focus RS

The RS manages to build on the already-impressive ST and deliver a remarkable combination of exhilarating performance and handling but with genuine comfort and everyday usability. Its astonishing grip and balance are of the highest order yet it is far from intimidating to drive, and it even maintains the same practicality as a regular 3-door Focus. It's also very good value, even if Ford has left some equipment on the options list.

In general terms the Focus RS is unlikely to cost you a fortune to run, but don't forget that fuel and insurance will be the two biggest drains on your finances. Servicing should be no more painful than if you were running a regular Focus, thanks in part to the Blue Oval's extensive dealer network and the car's basic underpinnings.

Occupants will struggle to find serious fault with the Focus interior, although space in the rear is modest, reduced slightly by the larger front seats. At the rear, the boot is a decent size and is unchanged over the standard car.

There's nothing wrong with the standard car's main controls and, thankfully, Ford refrained from changing the basic package. It has jazzed up the main dials to impart a sportier ambience and, on the whole, the new colour scheme works well. The three supplementary dials positioned atop the dashboard are largely there for effect, yet they don't look contrived or out of place. Elsewhere the usual Ford kit is evident, such as the useful remote audio controls and easy to understand ventilation console.

All the usual Focus creature comforts are present in the RS, including high levels of sound deadening and supportive seats. Given the engine's vocal nature when pressing on, cruising in the RS is refined, calm and relaxed. The car's sports seats are excellent and should accommodate a broad range of body sizes.

The usual alarm and immobiliser package applies to the Focus RS - and so it should given the car's looks and predictable desirability among both law abiding individuals and the criminal fraternity. Given the attention the old RS and Cosworth-badged fast Fords used to generate, it would be worth fitting an aftermarket tracking device for peace of mind - and to placate your insurer.

All the usual airbags are in place in the RS's cabin, as you'd expect from a car costing more than the average Focus. Also present is ABS and ESP, although the ESP system has been recalibrated to cut in later, which means drivers will be less tempted to switch it off in order to enjoy the car's full potential.

This is where the Focus RS excels. The serious enthusiast and the casual, brisk driver will both appreciate what Ford has achieved over and above the excellent ST. Despite the considerable power generated by the engine, the Focus is remarkably vice-free and exhibits little discernable torque steer in the dry. The ride is not as stiff as some rivals, but grip and roadholding are first rate. The steering offers good levels of feedback, while the car's raw pace is outstanding. More user-friendly than the old car, the RS is a superb all-rounder. It even sounds great; the signature five-cylinder warble mated to a trick induction system will have heads turning.

Its three-door only nature means the RS is not an ideal family car, although the minor reduction in rear room is not enough to make it unviable as a family wagon. Although the rear seats can't be removed or reconfigured like a conventional people carrier, there's plenty of room for children. The boot is also big enough to swallow the weekly shop, but you might struggle with shopping and a pushchair.

In principal this Focus would make an excellent first car; it's easy to drive and total running costs are reasonable. In practice, it's a different matter. Although easy to drive, the RS's powerful nature could cause problems for the novice driver. At best, the insurance premium would force many to think twice.

The RS stands apart from the regular Focus in terms of image thanks to that legendary badge, even though some buyers will be put off its performance credentials due to the Ford badge. And above all it's a fast Ford in the same vein as the infamous Sierra and Escort Cosworth models, a factor that boosts the RS's credibility no end. In quality terms it is as good as any Ford, and stands comparison with much of the competition.

The three-door only RS means access to the rear cabin will be a stretch for the tall and infirm, thanks in part to the car's sloping roofline and the need to clamber over the folded front seat. At the rear, the Focus' boot is a decent size and more importantly the tailgate requires little effort to raise and lower and the load lip is at a sensible height.

The RS comes as standard with a six-CD/tuner with DAB, which offers very good sound quality and remote controls, although it requires an additional premium for Bluetooth connectivity and a USB connector for MP3 players.

The RS comes in only three exterior colours: the familiar Performance Blue, the unmissable Ultimate Green and the stylish Frozen White, which is relatively subtle and also makes it look more like the World Rally Car. Inside the fabric colour is dictated by the exterior, so blue and white cars get more subtle blue fabric rather than the searing green. The trim itself is largely identical to the standard Focus, although the slivers of carbon-fibre-effect trim are welcome.

The RS is much like any Focus to park and so relatively straightforward, except that the rear wing and large seats restrict the view over your shoulder. Rear parking sensors are also an option and a something of a necessary one.