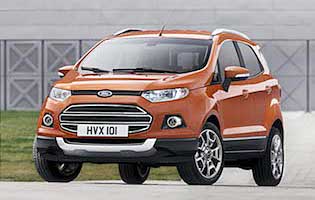 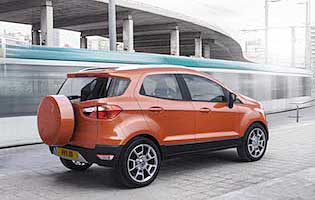 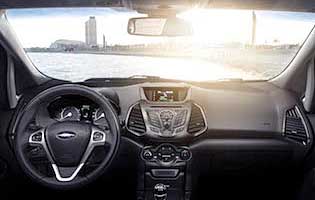 For all its global dominance, Ford is rarely first to market with anything radical. However, when it does catch up it does so in style; witness the C-Max and Kuga, for example. The Ecosport is another example of Ford taking its time and working at its own pace, this time filling a gap in the rapidly expanding compact SUV market.

The Ecosport is a truly global product, originally developed for South American markets and more recently adapted to suit European tastes. That it's built in India is proof as to how much of a global industry car making is these days.

However, when you step inside the Ecosport there's little clue as to its origins, as Ford has done an impressive job of boosting the car's look and feel for the demanding tastes of European buyers. In reality the car's cabin is very similar to the Fiesta and Focus.

The aesthetic is challenged by the decision to retain the tailgate-mounted spare wheel, something that's been abandoned by other makers in recent years. For all Ford's efforts to improve the Ecosport, this was one engineering change - along with the side-opening tailgate - too far. In light of the considerable cost to change this, it was deemed a fair compromise.

In reality the faux-4x4 look does the Ecosport no harm. In a crowded market populated by the likes of Renault's Captur and Vauxhall's Mokka, the Ecosport needs all the help it can get to stand out. The external spare wheel, the glitzy Fiesta-esque styling and high levels of standard kit are good starting points.

Our verdict on the Ford Ecosport Titanium 1.0 EcoBoost 125

Although rarely first to market with new models, Ford's approach of observing the trials and tribulations of others ensures it doesn't make the same mistakes as its rivals. The Ecosport offers Ford fans the chance to own a familiar looking product for a sensible sum of money, and one that impressively drives like a European Ford despite its more exotic origins. Despite a few minor rough edges, on balance the Ecosport is a good first effort.

By concentrating on small capacity engines the Ecosport promises to be a frugal car and one that won't break the bank in ownership terms. Also, in high-spec Titanium trim the standard equipment list is long.

The moderately sized boot can be expanded by folding the rear seats down, and although they don't quite fold flat the resulting space is much larger than the boot alone. Sadly you do have to grapple with the side-opening tailgate to get the job done.

There are a mixture of displays, from the simple but stylish instrument dials to the central infotainment screen. The latter looks a little dated compared to some of the car's rivals, though. It's also a small screen that is recessed a long way into the dashboard, shielding it usefully from the sun but sometimes making it harder to read at a glance. The rest of the controls, are a mixed bag, with the audio buttons small and numerous while the column stalks more logically laid out.

Overall the Ecosport's front seats could do with more lateral support, but in the main they prove reasonably supportive. On the move there's minimal wind and road noise to speak of, although the engines can prove vocal even at a modest driving pace.

Along with the standard issue alarm and immobiliser packages, the inclusion of keyless locking and ignition for selected models eliminates the need to fumble for a key in a dark street. The car's sturdy rear load cover should ensure prying eyes are denied access to the contents of the car's boot.

Don't expect all the usual fancy high-tech systems that you'd find on higher priced cars to be available on the Ecosport, but it's good to know Ford isn't neglecting its small models when it comes to innovation. Along with a good crash test rating, there's the usual electronic stability systems plus extras such as an SOS function that contacts the emergency services in the event of an impact, plus MyKey highlights such as speed and audio volume limit settings to reduce driver distraction.

Irrespective of engine choice the Ecosport delivers a driving experience that belies its economy roots. Easily comparable with the Europe-centric Fiesta in all the important areas, the Ecosport proves engaging. And this is despite the modestly powerful engine options. The three-cylinder petrol motor could be more refined and the diesel unit more powerful, but these issues fail to spoil the overall experience.

For those just starting a family the Ecosport would suffice for a while but you'll soon need something bigger despite the car's accommodating nature. However, as a second car it's versatile option.

There's no reason why the Ecosport shouldn't be considered as a first car; its compact dimensions, lofty driving position and affordable running costs make it an attractive proposition.

Despite being an all-new car in Ford's range, the company has got the basics right in terms of looks, cabin space and ease of use. It's hardly surprisingly that Ford is pitching the Ecosport as a dependable yet fun car from one of the most dependable brands around,.

The Ecosport's raised ride height ensures easy access to the car's cabin for passengers fore and aft. The boot aperture might not be the widest but it's unlikely you'll struggle with shopping or a pushchair. However, the decision to opt for a side opening tailgate door ensures that you'll struggle in tight spaces and have to plan ahead when parking.

In high-end Titanium specification the audio and connectivity options are comprehensive and will looks and feel familiar to any Ford fan. Mirroring the layout of the likes of the Fiesta, the main gripe centres on there being too many buttons and a display screen that could be much bigger.

Bright colours give the car the visual boost it deserves. The interior trim doesn't quite sparkle in the same way, as there's too much hard plastic on show. The overall ambience is reasonable, though.

Even without any electronic assistance, the Ecosport is easy to park. The lofty driving position and good all-round visibility ensure the process is as painless as possible.

Spare wheel mounted on outside of tailgate.