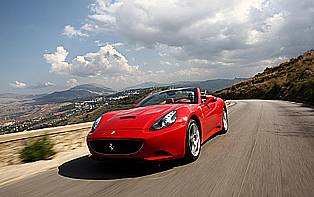 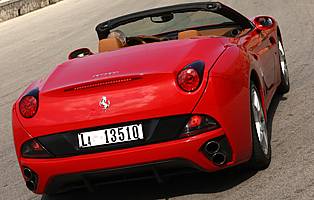 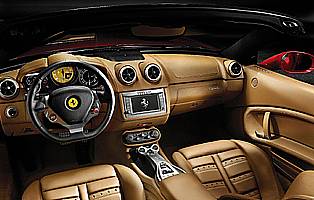 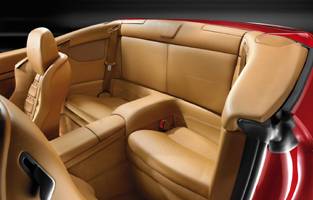 Already one of the most recognisable marques in the motoring world, Ferrari is attempting to broaden its appeal by adding a fourth model to its range. The California is effectively the new entry-level Ferrari, slotting beneath the 458 Italia, although inevitably even the least-expensive Ferrari doesn't come cheap.

The California's name hints at the prime target audience for this car: it is the first coupe-cabriolet to come from the iconic Italian manufacturer, combining roof down thrills and fixed-roof security. It is also the first Ferrari to benefit from a dual-clutch gearbox, therefore requiring less effort to drive in automatic mode whilst giving quicker changes in manual mode.

Inside the California combines racing overtones with touches of luxury, highlighting that it has the capability to be used as an everyday car. Depending on the owner's choice, the cabin can be swathed in fine leather to give a luxurious feel, with brushed aluminium dotted throughout. The view ahead is dominated by the heavily sculpted steering wheel and the large, centrally mounted rev counter, hinting at the performance on offer.

That performance is delivered by a direct injection version of the 4.3-litre V8, giving greater efficiency and therefore better performance. Unlike most multi-cylinder engines, the California's V8 uses a flat-plane crankshaft, which means it operates in effect like two four-cylinder units. Although naturally aspirated, it achieves the milestone of producing over 100bhp per litre and its redline is set at a stratospheric 8,500rpm, underlining the car's high performance nature.

The layout of the California is also more civilised than most of its stablemates. It is designed as a 2+2, with occasional rear seats which can accommodate older children or even adults over short distances. It also has boot space, varying in size depending on whether the roof is raised or lowered.

The California is arguably the most comfortable and usable car that Ferrari now produces, and it is a remarkably easy car to live with. The payoff for this is that when driven with real vigour it cannot perhaps reach the heights of the firm's more focussed offerings. Yet it is still a thrilling and high-performing car, and does an impressive job of covering all the bases.

Any California owner must be prepared for huge financial costs. Even after the large initial outlay, fuelling, servicing and insuring it will represent a major commitment. One plus is that the restricted supply and high demand means that the California tends to retain its value very well.

The California is inevitably compromised in terms of practicality, although the front seat occupants are not short of head or legroom. Storage space is relatively limited, with door pockets which will just hold a couple of small bottles and a slim glovebox. The luggage compartment is reasonable shaped and large enough with the roof up, but with the roof down it is reduced to a relatively narrow slot.

The layout of the California is surprisingly uncluttered with a relatively simple instrument display and centre console. The transmission tunnel carries three buttons for reverse, the launch control system and the automatic mode.

The California is designed from the outset to offer respectable levels of comfort, and while you are rarely in any doubt about the sporting nature of the car, covering long distances by motorway is not the chore it might seem. The seats are supportive and comfortable and noise levels are well managed.

Reassuringly, the California is packed with security equipment as standard. As well as remote central locking and an alarm an immobiliser system it comes with vehicle tracking as standard, using a driver identification card which must be in the car when it is on the move.

For a car with this performance, safety is of great importance and the California is not lacking in technology. Carbon ceramic brakes offer better braking performance than conventional steel discs, while the adjustable ESP, suspension and gearbox systems mean the car can be tamed for more difficult driving conditions.

The California is clearly a car to be enjoyed and it is at its best when driven with enthusiasm. The engine sings with delight at high revs, the snappy gearshift is incredibly rapid and the steering and suspension are rewarding and secure. In normal driving the California is surprisingly refined and, while there is more road and engine noise plus a firmer ride than a conventional sporting car, it is perfectly capable of being used every day.

The California is not suitable for family use, lacking full size rear seats or a sizeable boot. Child car seats will not fit in the rear, although it does come with the option of passenger airbag deactivation, enabling a child seat to be carried in the front.

The California may well be on the wishlist of those looking for their first car, but the purchase and running costs are way in excess of the normal budget and few insurers would consider an inexperienced driver with a car of this nature.

The California displays a level of quality you might expect from a car costing in excess of GBP100,000, although it could not be described as completely faultless. However, the crucial bits are clearly engineered to a very high standard. Image is something of a love/hate issue for any Ferrari: people either love it or hate it, but it's hard not to be taken in by the glamour of the badge.

As you might expect, getting into the California can be a little tricky for some, thanks to the bucket seats and low ride height, although the doors open wide to give a large aperture. Access to the engine and luggage compartments is straightforward however, and the small door handles are neat and unobtrusive.

The California can be specified with a combined audio/navigation unit, which offers all of the functions expected in such a system. It can also be controlled to a large degree by buttons mounted behind the steering wheel, which take a little time to get used to but leave the front of the wheel uncluttered. Sound quality is good, although the cost of the stereo upgrades is quite high.

The exterior colour of a Ferrari is a particularly sensitive area: a choice of traditional reds are likely to be most popular, but less common hues are also suitable, vivid colours less so. The option to colour the roof panel and A-pillars in black also gives a very different look. The cabin of the California can be endlessly tailored to a buyer's individual taste: leather, carbon fibre and Alcantara are available while the colour choice is huge.

The California is not the easiest car to park, thanks to reduced visibility and a sensitive throttle. However, front and rear parking sensors are available which do make life easier, although they are an expensive option.

A tyre inflation kit is fitted as standard, although both run flat tyres and a space saver spare wheel are available as options.

Mercedes-Benz SL 63 AMG Capable and desirable, not as focussed to drive

Aston Martin DBS Volante Stunning to look at and to drive, more road-biased than Ferrari