599 exterior is a mix of stylists curves and aerodynamic efficiency 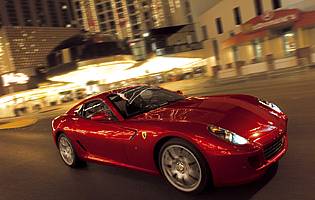 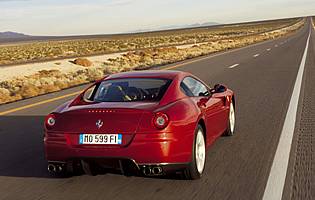 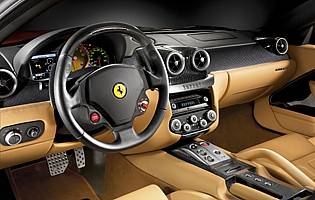 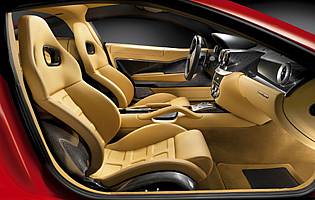 Sitting proudly at the top of the Ferrari range is the 599 GTB Fiorano, which aims to combine the comfort and exclusivity of a luxury GT with the performance and handling of a top drawer supercar. Following a long line of front-engined V12 Ferraris, the 599 GTB has a lot to live up to as well as an ever-increasing number of rivals in the segment.

A car of this stature and expense needs presence, and the 599 does not disappoint. It is a relatively compact design, but the heavily stylised exterior deceives the eye with the long pronounced bonnet stretching back to the compact cabin and tail. Ferrari also makes bold claims about its aerodynamic efficiency, crucial in reaching its reported 200mph-plus top speed, yet it has no obvious wings or spoiler to disturb the flowing shape.

Like any top drawer supercar, the 599 GTB has a mechanical layout designed for maximum performance. The mighty six-litre V12 naturally aspirated engine is mounted in the front of the car but behind the front axle; a so-called front-mid engined layout which is ideal for weight distribution. A rear-mounted gearbox and transaxle also contributes to the impressive 47/53 front/rear weight distribution.

There are other significant mechanical features, such as the use of aluminium for the chassis and body to reduce weight, adjustable electronic dampers and the manettino switch, which allows the vehicle to be tailored specifically to the driver's needs and the road conditions. The 599 GTB is available with the F1 automated manual gearbox, which promises gearchange speeds as low as 100 milliseconds, thereby minimising the interruption of power and maximising acceleration.

Even with this focus on performance, the 599 makes concessions to comfort too. The cabin is swathed in a mix of leather, aluminium and carbon fibre, while features such as electrically adjustable seats and steering wheel, climate control and a high specification audio system are standard.

Our verdict on the Ferrari 599 GTB Fiorano Coupe F1

The 599 GTB is obviously aiming at a rarefied market, but it offers an intoxicating mix of performance, handling, style and presence. It may require a huge financial investment, but those fortunate enough to do so will be rewarded by a car that truly lives up to the peerless Ferrari reputation.

The 599 is at the highest level of expenditure in pretty much every department. With a list price almost guaranteed to edge over GBP200,000 it requires a keen and wealthy owner, while insurance costs, fuel and maintenance are also inevitably going to be at the top of the scale.

The amount of space inside the 599 is a little disappointing given its size and GT breeding. The two occupants have plenty of space, with good head and legroom, but there are no rear seats nor any real space behind the front seats. Open the boot and there is a flat and relatively square boot but it is no bigger than that of a small supermini.

The layout of the 599 is clear and attractive, and requires little familiarisation. The transmission tunnel carries three buttons for reverse, the launch control system and the automatic mode. One disappointment is the audio and navigation, which has small buttons and a limited monochrome display, but the information display in the instrument panel is a useful extra.

The 599 can provide a very respectable degree of comfort, especially considering the level of performance on offer. The seats are very supportive with plenty of adjustment, while the noise levels are quite low. The ride quality is a little firmer than a conventional car, but with the manettino switch on a road-biased setting it is never harsh.

Reassuringly, the 599 is loaded with security equipment as standard. As well as remote central locking, an alarm an immobiliser system, it comes with vehicle tracking as standard, using a driver identification card which must be in the car when it is on the move.

The 599 is packed with safety equipment. Carbon ceramic brakes offer better braking performance than conventional steel discs, while the adjustable ESP, suspension and gearbox systems mean the car can be tamed for more difficult driving conditions.

Despite its stratospheric performance, the 599 is surprisingly easy to drive in normal conditions. Whether in automatic or manual mode, the gearbox shifts gears in a smooth fashion, while the long-travel throttle pedal makes it easy to control the huge power available. The manettino switch also helps here, slowing and smoothing the gearchanges and softening the suspension on normal roads. In the right conditions however, the 599 delivers thrills on a massive scale. The engine dominates the experience, with very strong torque from low revs coupled with vivid power near the high red line. The sensitive steering, strong carbon ceramic brakes and superb suspension all play their part, and it is hard to imagine a more entertaining car on a deserted road.

The 599 isn't well suited to family life, with a relatively small boot and just one passenger seat. It does offer the option of passenger airbag deactivation however, allowing a rear-facing child seat to be carried.

The 599 is too much car for a novice driver, nor is it likely to be affordable to the vast majority of new drivers.

Given its huge price tag, the 599 thankfully offers the kind of quality one would expect. The materials used throughout are clearly of very good quality, while the engineering behind it is also clearly first class. That said, the finish of the cabin is not peerless, which may disappoint the most discerning owners. The car's image is hard to beat, trading on the illustrious Ferrari history but also being elevated above the slightly more commonplace F430 model.

Thanks to long doors and despite the low roofline, getting into the 599 is not as difficult as may be expected. The bucket seats do require occupants to slide over the generous side bolsters, but otherwise it is straightforward. The luggage area is easy to access also, with a conventional bootlid and a low boot floor.

The 599 has a single DIN-sized audio unit which is a little fiddly to operate, thanks to small buttons and a monochrome display. The sound quality, especially with the Bose upgrade is very good, but for much of the time the engine note provides a more engaging soundtrack.

The exterior colour of a Ferrari is a particularly sensitive area: a choice of traditional reds are likely to be most popular, but less common hues are also suitable, vivid colours less so. The cabin of the 599 can be endlessly tailored to a buyer's individual taste: leather, carbon fibre and Alcantara are available while the colour choice is huge.

The 599 is not the easiest car to park, thanks to reduced visibility added to the sensitivity of the automated clutch when fitted with the F1 transmission. However, front and rear parking sensors are available which do make life easier, although they are an expensive option.

The 599 is fitted with a tyre inflation kit as standard, and run flat tyres or a spare wheel kit can be selected as options.