Aerodynamic aids distinguish the Speciale from the 458 Italia 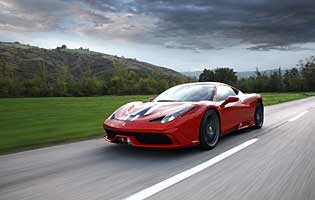 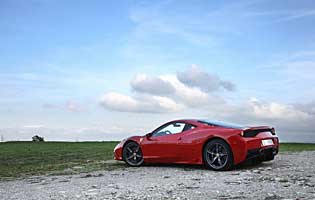 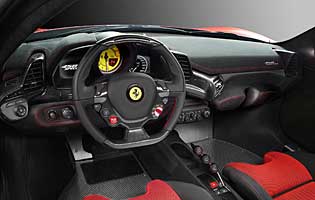 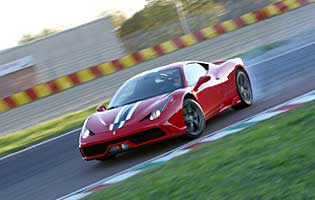 Just as Ferrari's range has for many years included a mid-engined V8 model, a leaner and more track-focussed edition has frequently followed for even more enthusiastic buyers. Now it is the turn of the 458 Italia to be given a makeover to create the 458 Speciale. The Speciale also marks a significant milestone in that it will be the last Ferrari of this size to use a naturally aspirated engine as the company switches to turbocharged units.

The Speciale builds on the well-established qualities of the regular 458, namely the sensational exterior design, highly responsive and powerful V8 engine and the accuracy and usability of the handling. Like many of its predecessors, the Speciale focuses on increased performance, reduced weight and even sharper handling.

The direct-injection petrol V8 engine remains, but thanks to revised internal components it offers more power, almost 600bhp despite remaining naturally aspirated, and is also lighter than the standard engine in the 458. The seven-speed dual clutch transmission also offers faster shifts than before.

Further weight savings are made elsewhere on the Speciale with new components, such as lighter wheels, thinner glass and a plastic engine cover and much less trim and sound deadening material in the cabin. The overall weight saving is 90kg, and combined with the extra power gives the Speciale a significant boost in performance.

Elsewhere the 458 Speciale gets some aerodynamic tweaks, namely new flaps at the front and a new diffuser at the rear, with the former gaining the ability to change angle at varying speeds to divert air flow in the most useful way possible. There is also a new compound for the standard carbon ceramic brakes, while the Michelin tyres are of a new compound created just for this car.

Our verdict on the Ferrari 458 Speciale

The 458 Speciale achieves two impressive goals. Firstly it manages to be more exciting to drive than the already-thrilling 458 Italia, but secondly it does this without completely sacrificing comfort. Keen drivers could still use the Speciale every day, but really it is the open-road performance that makes it one of the finest driver's cars at any price.

There's not much in the way of good news here. After the purchase price, the options list is long and expensive, vehicle excise duty and insurance are also inevitably high. The one saving grace is that the efficient auto transmission and direct injection engine can manage a respectable combined fuel consumption figure, but hardly any owners will want to drive it in such a way.

In terms of raw space for occupants the 458 Speciale is reasonably accommodating. Head and legroom are plentiful once you are aboard, although it is a strict two-seater and there is almost no secure space for oddments.

The 458 has quite an unusual control layout, with indicators, lights and wiper switches all mounted on the steering wheel. They take some acclimatisation, the indicators in particular, and occasional inconsistencies in their self-cancelling can be frustrating, but on balance the result is an uncluttered feel that works well.

There is a slight comfort penalty in the Speciale compared to the regular 458, chiefly in ride quality and noise levels. The seats are very supportive and with everything switched to the mildest setting it is relatively easy to drive, but the lack of carpets means quite a lot of resonance inside the cabin. The suspension is also very firm; in fact the Speciale defaults to firm suspension and requires a button press to activate a softer setting, an essential choice for UK roads.

A car like this needs a high standard of security, and the standard fit alarm, immobiliser and vehicle tracking system are entirely appropriate.

The 458 Speciale is built upon a very strong structure with plenty of carbon fibre, is packed with a multitude of electronic aids and at a very simple level has enormous reserves of grip, performance and braking power.

It's hard to imagine that the Speciale could improve on the driving sensations offered by the regular 458 Italia, but it manages to do so. The engine dominates the driving experience with its razor-sharp throttle response and spectacular soundtrack. Coupled with the lightning gearchanges and the acceleration is sensational. The sensory overload is completed with the handling which is sharp yet forgiving, and with the multiple modes of the manettino switch including a drift mode, inspires huge confidence and allows the driver maximum enjoyment.

A child's car seat will fit in the 458, but unless you are a two-person family the 458 simply can't do the job.

As much as any keen new driver would want to experience the thrill of a Ferrari, the 458 Speciale is not suitable for an inexperienced driver as well as being prohibitively expensive.

Despite the peerless brand image, quality hasn't always been its strongest suit. However, the 458 Speciale feels substantial, even though the cabin is stripped-down and free from luxuries. Image-wise the 458 has arguably the best in the business, with the instant cache of the Prancing Horse, amazing back catalogue and motorsport success.

The single door on each side is long and opens wide, so although the car's lack of height means it is a drop down into the seat, as long as the door is opened sufficiently this presents no problems. Pull up too close to the petrol pump at a filling station however and you have an undignified squeeze through the door aperture. It's worth noting also that the Speciale gets more substantial sports seats with bigger side bolsters, requiring a little more effort to get seated.

As standard the Speciale comes without an audio or navigation system in order to save weight, although it can be added back in as an option.

Like the regular 458 the Speciale is a riot of complex curves and straight lines, but unlike many cars in the range it looks good in both the traditional red and more universal colours. There are of course a multitude of options inside and out, leaving it almost completely to the owner to create a car to their taste.

Great care needs to be taken when parking the Speciale as the alloy wheels can easily be damaged and rear visibility is relatively restricted. However, front and rear parking sensors are available as an option, as is a reversing camera.