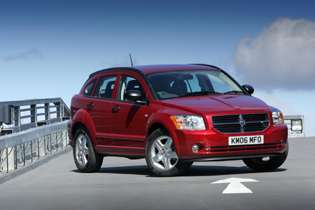 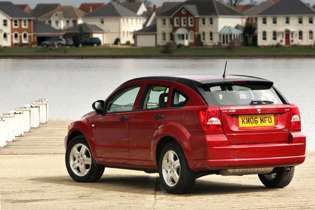 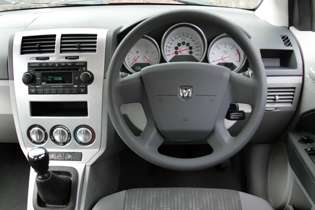 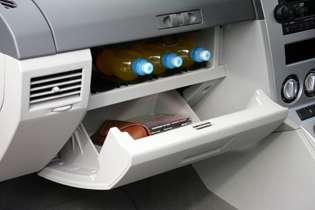 Signalling the return of the Dodge brand to mainstream motoring in the UK, the Caliber is an attempt to take on more established brands in the mid-sized C-segment. With a unique interior and exterior style wrapped up in a value package, can in tempt buyers away from the default choices?

Competing in one of the most popular market segments is no easy task, and the job is even more difficult for the Dodge given that it is reintroducing a brand that has only been applied to specialised vehicles in the UK for many years. However, Dodge is aiming for just a small slice of a large number of sales, and going against the common format in this segment may well give it an advantage.

One of the most striking aspects of the Caliber is its exterior styling, which falls somewhere between an SUV, a 4x4 and an MPV. The imposing front grille is a Dodge trademark, while the high waisted sides give it a strong, solid look. The shallow windows also contribute to the chunky feel, while at the rear it has a squared off tailgate. It also has a high ride height that adds to the SUV feel.

Inside the layout is conventional, although for passengers it does feel slightly unusual, thanks to the high ride height combined with the tall dashboard and small side windows. There are also plenty of useful features within the cabin, such as storage areas for a mobile phone or MP3 player, air conditioned glovebox and the availability of a folding front seat to use as a table.

Mechanically the Caliber is fairly conventional, with transverse mounted engines and front-wheel drive. One feature that is less common is the CVT transmission fitted to the 2.0-litre petrol model as standard. As well as a conventional mode it offers a stepped performance mode, which allows manual gearchanges through preset ratios rather than the seamless operation in automatic mode.

Our verdict on the Dodge Caliber SXT Sport

As an alternative to conventional cars the Caliber certainly hits the mark, and on these grounds alone it is likely to win buyers. Dynamically it is comfortable but not exceptional, while quality is average. It does offer space and value for money however, and its individuality will make it a must have for some.

Running costs for the Caliber should be respectable, especially in diesel form, but the big advantage is the purchase price, which compares favourably with similarly sized vehicles in terms of equipment.

An area where the Caliber scores well, thanks to decent accommodation front and rear as well as a useful load space. Rear seat passengers may find headroom slightly restricted due to the sloping roof, but otherwise leg and elbowroom is good. The boot is also generous and well shaped, while there are numerous practical touches throughout the cabin. The interior light doubles as a rechargeable torch, while some models are fitted with an air-conditioned glovebox designed to hold four 500ml drinks bottles.

A simple interior layout is a positive feature in the Caliber, with chunky ventilation controls and large, well-labelled buttons. The dials are also attractive, although the markings on the speedometer are tightly bunched. The green glow of the digital displays is also easy to read.

Passengers can expect decent comfort levels in the Caliber, with firm but supportive seats and good ride quality. Noise levels are reasonable but pick at higher speeds. The overall feel is of a car biased towards comfort rather than performance.

All models benefit from remote central locking, an engine immobiliser and an alarm. It also has a useful feature that makes it impossible to lock the car with the keys in the ignition.

Standard ABS and twin front airbags on all models is a positive, but buyers will need to choose models above the entry level S model to gain side airbags, while only 2.0-litre diesel models get ESP and Brake Assist safety systems as standard.

For a keen driver the Caliber may prove to be a little disappointing, as the ride, handling and steering are competent but not exciting. Body roll is kept in check however, and it is unlikely to catch out an unwary driver. In diesel form it accelerates keenly and with little fuss, but it is best suited to cruising, given the good ride quality and torquey engine.

The Caliber is likely to make a useful family car, with the impressive space and practicality on offer. The additional features such as the MusicGate Power stereo system and rechargeable torch are bound to come in useful for a busy family, and are unlikely to be found elsewhere.

With a high emphasis on value, the Caliber could well be on the shopping list of some first time car buyers. It has a distinctive design that is targeted at younger buyers, and running costs should be reasonable if not low.

In terms of quality the Caliber is middle ranking, as although the construction of the vehicle seems sound, the standard of materials used varies between good and average. More positively, the design of the Caliber does boost its level of perceived quality. The design is also crucial to the car's image, which is heavily American influenced and certainly stands out from the crowd. This is likely to polarise opinions.

A strong point of the Caliber, thanks to the tall body shape and ground clearance. Passengers can slide into the seats rather than climb up or down into them, and the same goes for the boot floor which is usefully flat with a small loading lip.

The SXT Sport model comes with a six-disc CD/tuner as standard, which offers good sound quality and a clear central display. A further option is the MusicGate Power system, which includes a stereo upgrade and a pair of speakers mounted in the boot, which fold down for outdoor use.

At first glance the cabin of the Caliber is boosted by a splash of colour: SXT and SXT Sport benefit from a metal effect central panel, while lesser versions have a mix of grey and black. Less impressive is the quality of the plastics themselves, which feel a little lightweight.

The Caliber's high driving position is useful when parking, and the squared-off styling makes it easy to judge the extremities of the car, except for the sloping bonnet. However, the shallow side windows and relatively poor rearward vision can make it difficult to avoid obstacles.

Ford Focus Conventional rival is highly competent in all areas