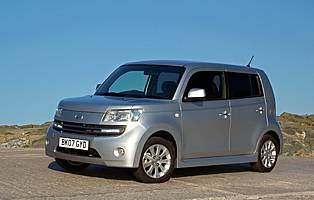 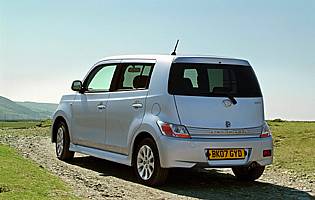 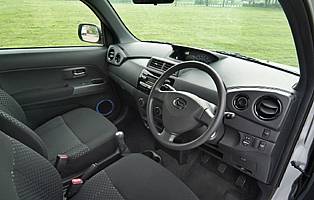 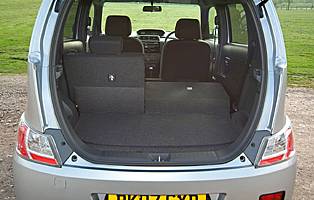 Small car specialist Daihatsu has tried its hand at creating a compact-MPV to accompany its compact sports Copen, compact SUV Terios and just plain compact Sirion models. With distinctive styling and plenty of practical elements it's also an attempt to further raise the company's profile from cheap and cheerful to something of more substance.

The Japanese influence is clear to see in Daihatsu's Materia mini-MPV. It looks unlike any other car in its class, with a distinctive combination of a wide bulky body, stubby front end and swooping arches and rear lights. Daihatsu claims the styling has earned the Materia a cult following in Japan and the US, and it hopes the reaction will be the same in the UK.

The Materia goes on sale with a single generously specced trim level and a single engine option, although it can be had with an automatic box at a premium. The 1.5-litre twin cam unit is a bored out version of the 1.3-litre found in the smaller Sirion hatchback and is similar to the unit in the Terios SUV. Engineered for low-down power and rev-response the 102bhp petrol unit is matched to a five-speed manual gearbox.

Aimed at young families and discerning older drivers in need of practicality the Materia has been engineered with the likely users in mind. The doors, for example, are specifically designed to open wide and are particularly deep to offer easy access while the rear seats can be folded to provide additional load space or a rudimentary bed. Storage and the ubiquitous cup-holders are ample.

An attempt to get away from the bargain-basement values sometimes associated with the brand, the Materia's single specification is the equal of any of its European opposition, with air-conditioning, alloy wheels and electric windows and mirrors all-round. The quality of the driving experience has also been given consideration and extra attention paid to the sound-proofing and driving position resulting in a car that's as pleasant to be in as any Euro-MPV.

Our verdict on the Daihatsu Materia 1.5 DVVT

The quality isn't far off European standards despite the low asking price and Daihatsu has made great strides with the Materia providing a responsive and well tuned driving experience. Some elements, such as the exterior styling and central instrument panel, will either appeal or repel but give it a chance and it is hard not to like the Materia's individual and practical nature.

Daihatsu has only made one engine available in the Materia, but the 1.5-litre petrol unit is an excellent trade-off between economy and performance. Combined fuel economy just shy of 40 mpg in the manual is unlikely to bother the wallet, while and insurance shouldn't be too steep either. The engine is also fitted with super hardwearing timing chains, rather than a cam belt, which is one less piece of maintenance to worry about. The self-regenerating catalyst should also last longer than a regular one too, further reducing costs.

Its boxy shape makes the Materia particularly roomy inside with ample head and legroom. The interior is fairly minimalist with no raised centre divide and a floor mounted gear lever, which further emphasises the spacious design. Folding the rear seats offers up a cavernous amount of load space which is easily accessed through the large boot door, and the Materia will comfortably seat five adults.

The Materia features a main display including dials and gauges in the centre of the dashboard just below the window line, which takes some getting used to if you're more akin to having the dials behind the steering wheel. The fuel gauge and odometer proved particularly hard to read and at night the lack of backlighting to the steering wheel can be disconcerting. The rest of the controls are more conformist and the Materia has a precise gearchange and conveniently light steering.

The Materia is perfectly comfortable over long distances and its ride, although firm, doesn't cause an upset on uneven roads. The seats are supportive and both the front and rear seats are adjustable. Those in the back can be tilted to a more comfortable angle for tired passengers, or laid flat along with the fronts to form a makeshift bed. Windows and mirrors are electric and air-conditioning is standard.

Daihatsu hasn't gone overboard with the security, but as you'd expect on a family car child locks are included on the rear doors and an engine immobiliser and remote central locking are standard.

ABS, EDB, twin front airbags and side airbags are all standard on the Materia, as are front seatbelt pretensioners and ISOFIX child seat point on the outer rear seats. The brake pedal has also been designed to collapse in an impact and not enter into the cabin.

For a boxy family car, the Materia actually offers an enjoyable driving experience. A stiff chassis with firm suspension offering little roll and plenty of stability responds well to changes in direction and the steering is light but not without feedback. Acceleration is modest but smooth and the Materia has no trouble keeping up with traffic, even if it lacks a real kick. On the motorway the high driving position is a positive.

Trendy young families are bang in the middle of Daihatsu's target audience for the Materia and its practical, child-friendly nature makes it an ideal family car. Its distinctive styling might earn kudos at the school gates and they're sure to love the blue mood lighting - even if they can't really appreciate it from the back seat.

It's very competitively priced, but other than that there's little to attract first time customers to the Materia unless they're specifically seeking a family car.

The Materia's image really depends on how you feel about the car's styling, but it certainly turns heads even if the brand isn't necessarily recognised as a quality one. Daihatsu is keen to get away from its cheap and cheerful image and the Materia's build quality reflects that with no unnecessary noises on the road and decent quality materials inside. The only letdown is a small amount of flex in the door panels which detract from sound overall build quality.

The Materia's doors open to a welcoming angle to allow easy access. The high seating position combined with the car's deep doors means it's simply a case of stepping into the Materia, rather than climbing or stooping.

The Materia comes with a built in single CD slot and RDS radio which is efficient, stylish and easy to use. The six-speaker sound system is good quality and unusually placed with the tweeters mounted in the dash next to the circular air-vents. Larger speakers are present in all four doors with the front speakers surrounded by switchable blue neon-style mood lighting for added effect.

Colours are as sparse as trim levels on the Materia with Dark mica red being the only non-metallic option. The four metallic options of silver, grey, dark blue and black cost a small premium but the black looks especially purposeful, particularly with the rear window tints. Dark cloth interior trim is basic but stylish and the shiny black radio surround centre console helps break things up a little.

Despite the high window line, visibility in the Materia is actually quite good, with large door mirrors aiding the reversing process. Parking sensors are included in the specification and combined with the Materia's squareness make slotting into spaces nice and easy.

Renault Modus Spacious and with a strong engine line-up