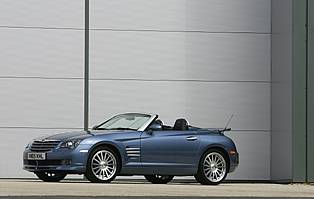 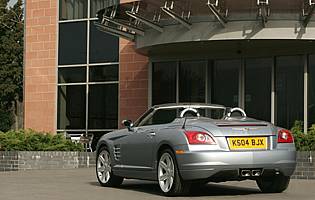 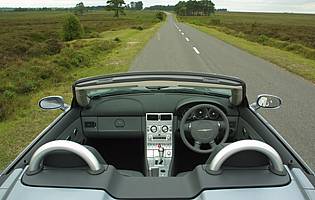 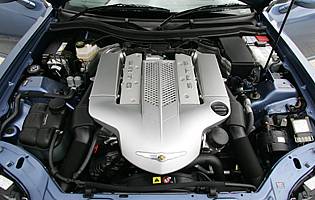 In a segment where style is crucial, the Chrysler Crossfire has a distinctive exterior and a large slice of American charm. Already a respectable performance car, Chrysler introduced a even quicker SRT-6 version, with an enhanced engine and suspension tweaks to make it a genuinely fast machine, whilst retaining the good looks and folding roof that gives it such broad appeal.

To distinguish the SRT-6 from the regular Roadster, Chrysler has added a fixed rear spoiler at the rear and a more pronounced chin spoiler at the front. A unique design of alloy wheel is also fitted, and with 18-inch versions at the front and 19-inch at the rear, its looks are one of its chief appeals. Although it may be a relatively uncommon sight on British roads, it turns heads on the high street with ease.

Another strong feature of the standard car is the characterful V6 engine. In the SRT-6 this six-cylinder unit gains a supercharger, adding 80bhp and over 100 lb/ft of torque and turning what was a quick car into a very fast one. Still mated to a five-speed automatic transmission and driving the rear wheels, the SRT-6 delivers effortless performance, with rapid acceleration available from low speeds and low revs.

The powerful engine also makes for relaxed progress in traffic, with small throttle openings enough to move the Crossfire along at speed. Other mechanical changes over the standard car include retuned suspension, comprising of stiffer springs, different dampers settings and a reprogrammed ESP system, designed to allow more freedom before intervening.

The folding fabric roof is also a key part of the Roadsters appeal. As in all Crossfire Roadster models, one roof catch needs to be released and given a slight push before one button press retracts the roof fully, hidden behind a solid tonneau cover. The reverse is required to put the roof up again, but as the roof folds into the boot, a divider must be folded into place before the roof can be lowered, and this unfortunately eats into the boot space. This method does however ensure that the car's looks are unspoilt.

Our verdict on the Chrysler Crossfire SRT-6 Roadster

Rivals of the Crossfire may offer greater all-round ability and fewer compromises, but few can match the character of the SRT-6. The added performance comes at a price, but the thrills on offer are worth the extra investment. Committed buyers will enjoy a car with as much enthusiasm as themselves.

The Crossfire is quite an expensive car to run, with average, real-world fuel economy around the 20mpg mark. The initial purchase price is also quite high, plus a premium-rated insurance grouping means a substantial financial commitment.

Neither space nor practicality is much in evidence in the Crossfire, which is understandable given its two-seater convertible layout. Despite this, there are slim door pockets and a decent glovebox, as well as a storage pouch between the seats. Luggage space is relatively small, but although it is an unusual shape, the luggage area will hold 190 litres with the roof up. With the roof down a partition must be folded, reducing the boot volume to 104 litres.

The Crossfire uses a single column stalk like a Mercedes-Benz, which controls indicators, windscreen wipers and main beam. It can feel over-complicated at first, but with familiarisation it becomes straightforward to use. The rest of the controls are simple and well labelled, while the instruments are attractive and informative. The warning lights are housed in a pair of separate displays mounted either side of the instruments, although these can be obscured by the steering wheel.

The sports seats in the SRT-6 provide good support, although their shape means the occupants' head tends to be quite far away from the non-adjustable head restraints. Again the ride quality affects the comfort levels on offer; smooth roads create no issues, but rougher roads do transmit noise and movement into the cabin. The fabric hood, though watertight and secure, allows a fair amount of external noise into the cabin, which can be distracting.

A desirable car like the Crossfire needs good security, and the SRT-6 is fitted with a Thatcham approved alarm system, plus an engine immobiliser. Remote central locking is also fitted, and the doors can be set to lock automatically once the car has reached nine mph to reduce the threat of unwanted entry.

As well as the strong performance, grip and brakes of the Crossfire, it has ESP and ABS fitted as standard. In addition, Brake Assist also boosts brake performance in the event of an emergency stop. Front and side airbags are fitted for both passengers, with seat belt pretensioners on both front seats, giving the Crossfire a good level of active and passive safety for a car of this nature.

The overwhelming appeal of the Crossfire SRT-6 is the performance on offer. The supercharged V6 provides huge amounts of torque from very low revs, and it requires only a small squeeze of the throttle to deliver easy acceleration. Pressed all the way to the floor and the Crossfire rockets forwards, accompanied by a wonderful engine noise. The transmission also assists, with smooth shifts even when accelerating hard. Although it has a manual mode, it is easier to make smooth progress when left in fully automatic mode. The acceleration is matched by the excellent braking performance, even considering the lack of natural engine braking. A firm press on the pedal leads to a rapid reduction in speed. Less impressive is the steering, which responds quickly enough but lacks feel, and although the Crossfire handles well on smooth roads, the firm suspension is struggles on uneven surfaces.

With only two seats and a small boot, only the smallest of families could use the Crossfire as a regular car, though it is likely that enthusiastic children would enjoy the cars looks, sound and performance.

The Crossfire is unlikely to make a good first time car, as its performance and running costs are beyond the means of most new drivers.

The overall feel of the Crossfire is very good, with its unique design inside and out and the use of good quality materials. This is spoiled to some degree by the plastics used on the centre console and gearlever, areas that will be frequently touched by the driver but do not feel up to the same standard as the rest of the car. In terms of image the Crossfire makes the most of its US origins, and the limited numbers in the UK make it an unusual and intriguing site on British roads. The styling plays a big part in the Crossfire's image as a car that is dynamic and exciting.

Despite the low stance and folding roof, gaining access to the Crossfire is relatively straightforward. The large doors open easily and give a generous aperture to enter through. Access to the boot is also simple, although the actual opening is quite small.

As standard the Crossfire is fitted with a single CD and radio tuner with a powerful 240 watt output. Although it is only a slim single DIN model, it has a large central display and two large control knobs. A series of buttons across the bottom perform different operations depending on the display screen, make the unit easy to operate. It also produces a powerful and clear sound, which is useful when driving with the roof down.

The SRT-6 model gets sports seats as standard, which are trimmed in soft leather and suede for a high quality feel. The doors are a pleasant mix of dark colours and flashes of metal-effect plastic, while the majority of the dashboard is finished in silver. The colouring helps to lift the cabin that is understandably confined, but the plastic feels hollow and thin to touch. This lets down what is otherwise a good interior feel.

Roof up, parking the Crossfire can be a little tricky, thanks to the restricted view through the rear window. The bodyshape however does help when looking through the door mirrors, as the strong shoulderline gives a clear indication of the extremities of the vehicle. With the roof down however, the unhindered rear view makes parking a breeze, with excellent forward vision also.

BMW Z4 Roadster Regular Z4 3.0 is quick and boasts impressive handling, but styling not to all tastes