The Camaro retains its classic design with detail enhancements 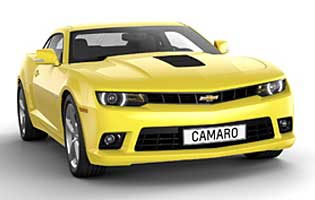 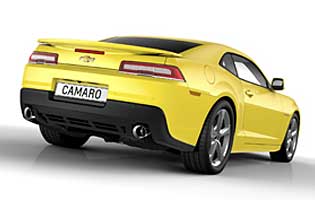 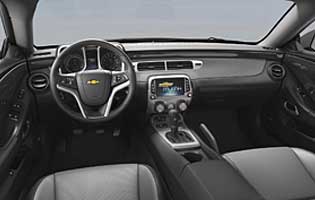 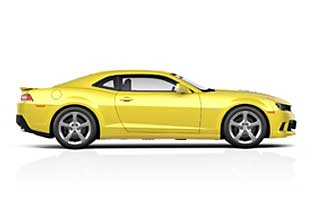 On the one hand Chevrolet's presence in the UK has been about high value family cars, yet at the same time it has iconic performance cars like the Camaro in its stable. First introduced back into the UK in 2012 Chevrolet has further enhanced the Camaro for the 2013 model year with subtle restyling designed to enhance its attractiveness to buyers.

The recipe for the Camaro is very simple and hasn't really changed since the very first iterations appeared in the 1960s. It is a two-door, four-seat coupe or convertible with a big B8 petrol engine up front with drive going to the rear wheels through a manual or automatic transmission, and the same set of choices apply to this 21st Century version.

This latest Camaro also follows the classic silhouette of the very first Camaros, with the 'hockey stick' kink in the rear pillar, the slim horizontal tail lights and the wide front grille all being recognised elements across the generations.

The most recent set of changes to the Camaro have centred around improving its aerodynamics, with the front end incorporating a wider lower grille and a slimmer upper grille to improve airflow. At the rear meanwhile there is a new diffuser and the bootlid has been redesigned to increase downforce and therefore improve grip.

Mechanically the Camaro sticks with the tried and tested V8 engine, with a more powerful version paired with the manual gearbox while the auto has a slightly lower output. The Camaro range is limited simply to a choice of coupe or convertible bodystyle and manual or automatic transmission. It is also available in left-hand drive only, which will be too much of an inconvenience for some buyers.

Our verdict on the Chevrolet Camaro Coupe Automatic

Although it is unashamedly an American product the Camaro does have a lot to offer a European buyer. It mixes strong style with performance and sounds handling, whilst not compromising ride quality or comfort either. It offers a lot of car for the money, and as long as you can afford the fuel consumption and don't mind left-hand drive it makes an intriguing and good value alternative.

There's no way of avoiding the fact that the Camaro will be an expensive car to run. Although it is good value to buy in the first instance, fuel consumption will be high regardless of driving style and insurance costs will also be high.

The Camaro is a strict four-seater, and while front seat passengers are well catered for those in the rear have a little less room - taller adults may find it a little too uncomfortable for anything other than shorter journeys. Storage space in the cabin is fairly limited too, but the boot is a decent size.

Inside the Camaro manages to neatly combine old and new to good effect. There are pleasing retro details such as the oil pressure and temperature gauges mounted low in the centre console, while the touchscreen display is pleasingly modern.

Although it has a sporty appearance the Camaro actually offers a relatively high standard of comfort. The cabin is quiet and comfortable, the seats are supportive and noise levels are acceptably low. Only the ride is occasionally a little firm but this is only noticeable on very poor surfaces.

As befits a car as desirable as this the Camaro has remote central locking, an alarm and an immobiliser all fitted as standard. With a proper boot luggage is well secured, but anyone considering purchasing a Camaro might do well to consider a tracking device for additional reassurance.

As you might expect the Camaro has a full complement of safety kit, including front, side and curtain airbags, ABS and Chevrolet's StabiliTrak traction and stability control system all as standard. It also benefits from a strong passenger safety cell, and the Camaro's suspension has been specially developed to cope with the demands of European roads.

Driving the Camaro is all about enjoying the easy-going, torquey nature of the big V8 engine up front. Almost regardless of the gear selected only a moderate squeeze of the accelerator is required to make substantial progress, and although there is some rumble from the engine a little more noise would be welcome. To add to that the brakes are strong and the handling is impressive - underneath the Camaro has independent suspension rather than more prosaic set up of before.

A keen family could live with the Camaro for daily duties, although children would have to get used to scrambling into the back seats. The cabin also appears sufficiently sturdy to deal with sticky fingers and prying eyes.

As much as it may be on the wishlist for a new driver, it is likely to be too expensive to buy and to run for a novice, never mind having to deal with 400bhp.

American cars sold in the UK suffer from a bad reputation for quality but the Camaro serves up a decent standard. The materials in the cabin vary between satisfactory and good, while the build quality certain feels worthy of the price tag. The Camaro also benefits from a very strong image, with a glorious back catalogue of old Camaros and muscle car heritage to draw on.

The Camaro is two-door only, which means a pair of substantial doors to open. Those in the front are then presented with a vast aperture through which to climb, but those in the rear first need to fold and slide the front seats. That leaves a reasonable gap to climb through but the Camaro's relatively low roof means it is best suite to the physically able. The boot can be opened remotely and has a good-sized aperture.

The Camaro is one of the first Chevrolets in the UK to benefit from the MyLink system which incorporates a touchscreen, satellite navigation and audio streaming as well as the ability to upload apps to enhance the available options.

With such a strong, eye-catching exterior design the overall look of the Camaro varies considerably depending on the colour chosen, particularly as a bold pair of stripes along the length of the car are fitted as standard. On the inside there are a few choices for the colour of the leather but greys and blacks dominate.

The nature of the Camaro's exterior design means that visibility is relatively limited; slim windows all round make it relatively hard to place. However the steering is light at low speeds and a reversing camera fitted as standard means it is a straightforward process to park the Camaro despite its size.

An emergency tyre repair kit is fitted as standard.

Jaguar XK A classier drive but a lot more expensive

Mercedes E-Class Coupe Big, comfortable and good to drive, but more expensive and no sports car