Familiar X1 shape has been changed to give more cabin space 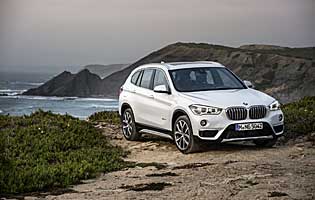 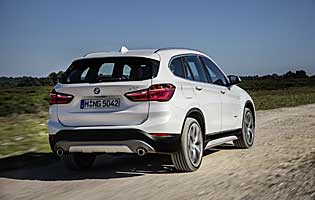 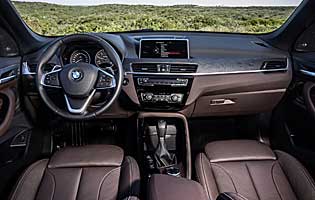 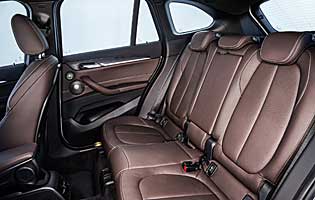 The smallest of BMW's range of SUV models is back for a second generation with the arrival of the new X1. Although visually similar to the outgoing model it is a very different car underneath, benefiting from the greater sharing of architecture across the BMW and Mini brands to create a more versatile and appealing car.

The X1 has the same raised ride height and chunky body cladding as the outgoing car, which hints at a level of off-road ability that is likely far beyond any owner's desires. One marked difference is in the dimensions, where the new car is significantly shorter but taller and wider than before, giving more space on a smaller footprint.

This increased level of practicality is a result of the X1 now sharing platform architecture with the 2 Series Active Tourer, BMW's compact MPV. The upshot is that the cabin is more spacious, with more upright seating front and rear making the most of the taller design. Boot space has also been increased as a result, with 505 litres available in the rear with the seats in place.

Petrol engines are offered in the UK for the first time, with a choice of four power outputs from 2.0-litre petrol and diesel units. As before the X1 range is available with two or four-wheel drive, but two-wheel-drive models now drive the front wheels rather than the rears; this is a result of the new platform using transverse engines for increased space efficiency.

Alongside the more efficient engine line up the X1 also benefits from the latest eight-speed automatic gearbox and the full suite of Efficient Dynamic systems, all designed to enhance efficiency and performance. Each model manages both higher performance and better fuel consumption and emissions results.

Our verdict on the BMW X1 xDrive25d Sport Line

With the second generation X1 BMW has created a small SUV that is now much closer in design and ethos to the bigger X3. More practical and efficient than before, it is also more pleasurable to drive, although the ride quality remains one of its weaker points. Overall, however, it delivers a convincing and desirable package.

Ignore the premium price for a moment and the X1 has the potential to provide relatively low running costs. Driven with care the diesel version have the ability to deliver impressive fuel consumption and low emissions for a minimal VED payment. Servicing costs will be a little higher than mainstream offerings however.

For 2016 the X1 is much improved over the old car in this area, making the most of its footprint. Up front head and legroom is good while in the rear it's also good enough to carry three adults. Boot space is good too, and there are plenty of useful spaces for storing items throughout the cabin.

The X1 gets the familiar BMW dashboard layout which is clear, understated and easy to use. The large display screen sits in prime position while the crystal-clear instrument display has digital sections at the bottom to display additional information.

The X1's seats offer good support and a wide range of adjustment, while noise levels are broadly kept well in check. When pressing on the four-cylinder diesel can be a little noisy and over smaller bumps the ride quality is not as good as some rivals, although choosing an SE model on smaller wheels will mitigate this. Relatively firm suspension is a weak link, although models riding on smaller wheels and tyres are better in this respect.

Of course there is the approved standard alarm, immobiliser and locking wheel bolts for the alloy wheels. On top of that, all X1 models have remote central locking with keyless operation, removing the potentially vulnerable ignition barrel altogether.

Alongside the expected provisions such as airbags and ESP, all BMW X1s are fitted with the forward collision alert system which includes automated city braking up to 30mph and tyre pressure monitoring, all of which have the potential to be life savers.

It might be billed simply as the xDrive25d but this tag does not accurately reflect just how quick the high power 2.0-litre diesel engine is in this installation. With the smart eight-speed transmission taking care of gearchanges and four-wheel-drive traction the X1 is a surprisingly rapid car, if a little noisy when extended. The driving experience is also entirely typical BMW with responsive steering, a lack of body roll and a general sporting bent.

BMW has done its best to ensure that the boot can handle family duties without breaking a sweat and, although a larger family might find the centre seat rendered useless with two child seats in the outer positions, it is a viable option for a family seeking new transport. The caveat is that the 2 Series Active Tourer is a better option for families in several key ways.

The X1 is most likely outside the price bracket of most first-timers, although it would be cost-effective when it came to running costs and even insurance. It's sufficiently easy to drive too, although the xDrive25d model is probably a little quick for an inexperienced driver.

Despite being one of the least expensive models in the BMW range, there's no skimping on quality. Inside and out the X1 displays impressive levels of build quality and design, a key part of the brand appeal. BMW's image continues to improve, with an ever-expanding range of models and the 'want factor' that remains strong.

The slight increase in ride height makes climbing aboard the X1 a cinch, although passengers getting into the rear will need to be conscious of the deep sills and relatively small footwell. Access to the boot is straightforward too, with a sensible load cover and easy folding of the seats.

An improved infotainment system now offers DAB and, more importantly, satellite navigation as standard, giving it an advantage over many of its rivals. The system itself works very well with a large, clear display operated by the BMW i-Drive controller, with steering wheel controls and the Connected Drive option for smartphone integration.

With dark coloured trim around the base of the car it is up to the buyer whether they wish to be more discreet and choose a complimentary colour for the paint or a contrasting brighter shade. On the inside there is a greater choice of colours than the usual grey which also helps to lift the overall feel.

The slight reduction in length means the X1 is now better able to squeeze into parallel spaces and visibility is improved too, although the rear window is still relatively small. Rear parking sensors are standard on all models with more sophisticated systems including front sensors, and cameras are available on the options list.