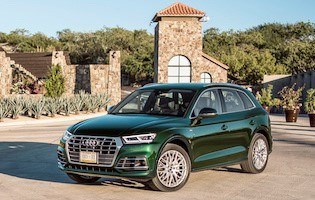 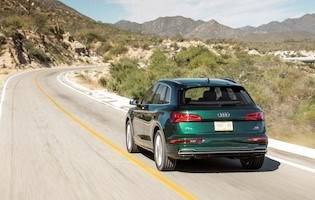 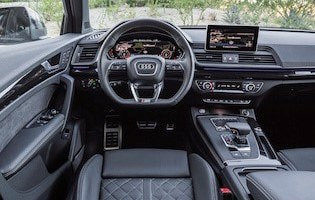 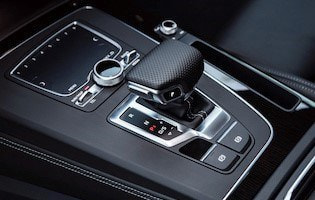 The Q5 has been a massive sales success for Audi and has been the brand's dominant SUV ever since it was introduced nearly 10 years ago. It's proved a successful recipe for the German carmaker, so it's no surprise that there's nothing too revolutionary with the new model – there's more luggage space, a bigger and quieter cabin and a lighter body.

The first thing you notice upon climbing inside is just how spacious and well-appointed the cabin is. The Q7 is Audi's big SUV, but the Q5 hardly feels any smaller from behind the wheel. The quality of materials is also impressive and befitting of a car at the premium end of the segment.

Luggage space is also incredibly useful. The boot is a bit bigger than before, and with the rear seats down there's a truly capacious 1,550 litres of luggage capacity. However, that's marginally smaller than an Audi A6 Avant (estate), which costs a bit less and is only a little less spacious for passengers.

There's a very limited engine range on offer, but at least it keeps decision making simple. The 2.0-litre petrol unit delivers 249bhp making it easier to drive than the diesel, but running costs will be higher. The 2.0-litre diesel we tested easily returned about 48mpg, though it did feel slightly underpowered. A 3.0-litre diesel will be added to the range at a later date.

Perhaps the one major complaint that can be levied at the Q5 is that the S tronic automatic gearbox is a disappointment. It struggles to engage the clutch at lower speeds, leaving you lurching from junctions and in traffic.

Our verdict on the Audi Q5 S line

Overall, the Audi Q5 is a brilliant mid-sized SUV. The gearbox is hugely disappointing in such an impressive package, but on the move it's fine so once you learn its quirks at low speeds you can drive around it. Otherwise, it's spacious, stylish and well put together, making it ideal for families.

The 2.0-litre diesel engine in our test car was impressively economical for a vehicle of this size. The official economy figure is 56.5mpg on the combined cycle – we managed a still admirable 48mpg over the course of the week.

For any SUV, space and practicality is one of the key selling points – the Q5 doesn't disappoint. Inside there's plenty of room for passengers, with rear seat legroom ample even for adults. There are also plenty of cubby holes and a couple of cup holders to store smaller items on long trips.

Boot space is similarly impressive, and is slightly bigger than it is in the old Q5. With the rear seats down there’s an incredibly useful 1,550 litres of space – though it should be noted the Audi A6 Avant is slightly roomier for a little less cash. It is a touch smaller in the cabin, though, so which is the better choice will come down to wants and needs.

The central infotainment screen is starting to look a little dated now with its orange-on-black design reminiscent of old LCD displays. However, the software works quickly and the central dial that controls navigation of the screens is intuitive to use.

The stand out feature is the Audi Virtual Cockpit, which costs £250 and is excellent value. It replaces the traditional instrument binnacle with a large configurable TFT display. The driver can choose to have the dials prominently displayed, or relegate them to the corners so the satellite navigation screen can be displayed behind the wheel. It’s brilliantly designed and very useful.

The advantage of the high-sided SUV shape is that there's cabin space aplenty – for families this might be what makes the Q5 more appealing than an estate. The seats are comfortable and while they don't cosset you particularly well when cornering, after long motorway slogs you should feel fresh when you arrive at your destination.

The Audi Q5 comes with all of the security kit you'd expect from a premium SUV, with a perimeter alarm and immobiliser as standard. The Audi badge might make it stand out to criminals, but fortunately the Q5's relatively understated styling means that it blends into the crowd a lot better than some of its more 'bling' rivals.

The new Audi Q5 comes with an impressive safety record, receiving a five-star NCAP crash score. It scored a hugely impressive rating of 93 per cent for adult occupant safety, while child safety was rated at 86 per cent.

The Audi Q5 falls away somewhat with the driving experience. It's pretty good for an SUV, which will naturally struggle in corners thanks to a high centre of gravity, but it doesn't quite have the almost-baffling body control of its bigger brother, the Q7.

With the lethargic S tronic gearbox frustrating at slower speeds, city driving can become frustrating. However, once on the open road the Q5 becomes a comfortable, quiet cruiser.

Those looking for a family car will be well-suited to the Q5. The large cabin makes it ideal for carrying youngsters and there's plenty of storage for the assorted items that naturally come with family life.

The large boot also means weekends away are easy even if you’re going camping – tents and other equipment should easily fit in the boot. The split-folding rear seats also help when carrying kids and odd-shaped luggage – it means longer items can be slotted in the rear with space still available for a rear passenger.

There is very little appeal as a first car, primarily due to the size of the Q5, but also because running costs for newer drivers will be quite high. Inexperienced drivers might enjoy the higher driving position, but the Q5 feels large on the road, particularly on country lanes, which could make it stressful to drive.

One of Audi's biggest selling points is its brand image and build quality. This is evident in the Q5, particularly inside. The materials used throughout feel high quality, but not at the expense of being rugged.

Although the interior is starting to feel a bit dated – and is very uninteresting to look at – anyone who sits in the cabin will know they’re sat in a premium product. Audi’s typically understated but classy styling is present here and simply oozes quality.

With large doors and a relatively high driving position, climbing in and out of the Audi Q5 is easy. There's also a decent amount of reach and rake with the steering wheel, so finding a comfortable driving position will be easy unless you have particularly long limbs.

Audi's in-car entertainment system has been around in its current layout for years, and while it's starting to feel quite dated there's no denying it's one of the simpler systems to use.

The new Audi Smartphone Interface is an excellent addition, though, as it brings Apple CarPlay and Android Auto to the SUV. Both are incredibly easy to use and simply require you to plug your phone in. It also comes with a wireless charging unit, which makes charging Android phones a doddle.

There's a wide range of colours available, though most are quite muted tones. Black and white are available at no extra cost, with the variety of metallic shades costing £645 extra. Our car was in Navarra Blue, which hid all styling cues making it blend into the background – a brighter colour such as Matador Red would stand out better.

There are only three trim options available. Even the base spec SE model gets 18-inch alloy wheels and Xenon headlights, while upgrading to Sport trim gives you an LED interior lighting package and satellite navigation. We drove an S line car, which gets 19-inch alloy wheels, LED headlights and a sporty bodykit.

Being a mid-sized SUV, the Q5 is fairly large but not intimidatingly so. That said, it's about as big as parking spaces get, which means a busy multi-storey car park can be a bit of a pain to park in.

Fortunately, there are parking sensors and cameras to make life somewhat easier.