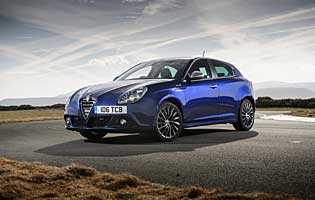 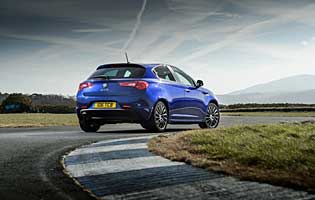 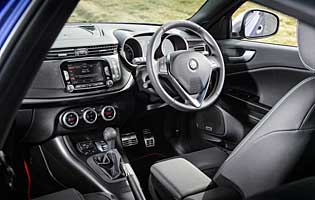 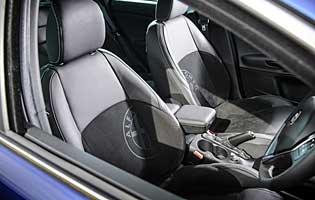 Alfa Romeo's modest model line up relies heavily on the Mito supermini and this, the Giulietta compact hatchback. It should be no surprise then that the Italian firm has chosen to update it, bringing a reworked exterior, updated cabin, revised engines and some new options in order to give it more muscle to compete in the sector.

A compact family hatchback has been a cornerstone of the Alfa Romeo range for decades, and the Giulietta has a number of fondly-remembered predecessors behind it. Sentiment is of little use however in such a fiercely-competitive segment and the Alfa has to contend with some of the best-selling cars in the country.

To that end the Giulietta has received a comprehensive mid-life refresh. Starting from the outside, all models now benefit from a new version of the classic Alfa Romeo grille, the front foglights have been given new bezels and there are new designs of alloy wheel across a range of sizes. New colour options have also been added.

There are significant changes on the inside of the latest Giulietta also, chiefly the redesigned dashboard layout. All models now come with Alfa's Uconnect system which provides Bluetooth, voice control, DAB radio, music streaming and SMS reading, while models equipped with sat nav get an even-larger screen. There's a new steering wheel, revised seats, door trim panels, sound deadening and new trim and materials inside too.

Mechanically the Giulietta is largely as before although all the engines on offer are revised for better efficiency and performance. The previous 140bhp 2.0-litre diesel unit has been replaced altogether by a new 150bhp unit, and as well as offering more power it also offers reduced emissions and better fuel economy.

A number of detail improvements have given the Giulietta more appeal both on the showroom floor and to the driver. It remains however something of a niche choice, and requires the buyer to overlook technically better rivals in favour of something with more style and individuality. It has closed the gap a little, but the Giulietta is amongst the chasing pack in this segment.

Once past the initial purchase price the Giullieta should be relatively inexpensive to run. The diesel versions promise good fuel consumption and insurance costs should be little above the norm.

The Giulietta's revised cabin now offers a more simplified layout which is good news for the driver. The instruments are stylish but clear and the new touchscreen system is well-placed and easy to operate. The DNA switch and additional inputs are sited sensibly low down in the centre console too.

An important improvement here is the Giulietta's new seats, which are supportive and comfortable over a wide range of adjustment. The improved sound insulation is also a help, and the engine only really becomes vocal when revved hard. Less impressive is the ride quality, which is acceptable on most surfaces but struggles when the road deteriorates.

All the main bases are covered, with an immobiliser and remote central locking as standard. The key can open the boot alone if desired, and Alfa's 'Safe Lock' deadlocking system is standard.

In high output diesel form and in Sportiva Nav trim, the Giulietta has a clear brief to be sporty, if not quite at hot hatch levels. With the standard DNA switch the Giulietta can be tailored to suit the driving style, and in Dynamic mode the throttle response is better and the steering has more weight. Despite this, the Giulietta is modestly entertaining rather than great fun; the 2.0-litre diesel is keen but brisk rather than quick and overall it does not feel as well honed as the class best.

Although it has all the basic qualities in place with relatively easy access to the rear seats, Isofix child seat mounts and a spacious boot, there are some aspects that count against it. The boot lip is too deep to allow easy access to heavy child-related paraphernalia and it's generally not wide or deep enough for pushchairs.

Entry-level models in the Giulietta range will be tempting for some first-time drivers, and broadly speaking they have something to offer: a relatively easy driving experience and a usable size. However even the cheapest version is considerably more than comparable versions of key rivals.

Alfa has come a long way in terms of quality in the past decade and the Giulietta updates continue that good work. Although not the best in the class it is a well-finished product with very little evidence of penny-pinching. Image-wise Alfa remains something of a mixed bag, with its iconic sporting history counteracted by reliability gremlins and build issues in the past.

Although the rear door handles are located in such a way as to disguise the fact that the car is a five-door, the two extra doors allow an ease of access for rear passengers that's on a par with anything else in the sector. Likewise the front seat occupants, for whom getting in and out is easy.

The new Uconnect system is straightforward and easy to operate, with the larger touchscreen on sat-nav versions being most welcome. With Bluetooth and DAB as standard plus a USB input it gives the desired scope for anyone wanting music on the move.

The Giulietta benefits from a number of changes in respect of colours and interior trim, both of which help to give the Giulietta a visual fillip. Classic Alfa reds and blues suit the exterior best, while on the inside the trim remains broadly dark, although lighter browns and reds can be selected.

Tyre repair kit on Progression and Distinctive, space saver on other models.

Audi A3 A very desirable model to own, but spec is low for the price