Insure your home against the British weather

Famously hard to predict, British weather always seems a little more turbulent than it once was. A number of powerful storms have ripped through the British Isles in recent years, causing damage to thousands of homes as well as injury and even deaths. But is our weather really changing? And are you covered for unexpected weather events? 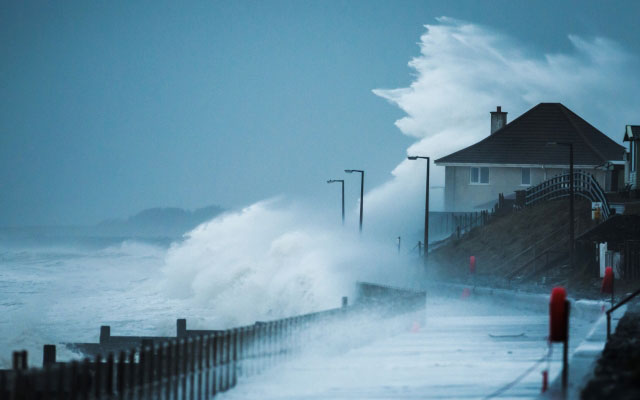 Is Britain getting stormier?

Broadly speaking the Bristish Isles are in the temperate climatic zone of the planet, but it is their position on the edge of the Atlantic Ocean that acounts for both the mild climate and the variable weather. However, the UK could experience an increasing number of wind storms in the future, according to research published by the Association of British Insurers (ABI) in 2017.*

From this the ABI suggests that costly storm damage to property caused by powerful winds could increase by 50% across central England and Northern Ireland by the end of the century. This is based on the assumption of a temperature rise of +4.5C due to models of climate change. However, parts of southern England could see a decrease in wind storms and related damage.

Storms ripping off roof tiles, bringing down tress and masonry, and flooding homes already cause around £1 billion worth of damage a year in the UK.

Is flood risk increasing in the UK?

The cost of wind damage can be higher than flood damage, though the two often go together. The Met Office points out that 7 of the 10 wettest years on record have happened since 1998, and the annual average rainfall over the UK has increased in the last few decades.

Meanwhile, due to more new homes, offices and retail parks, as well the tendency to pave our front gardens for car parking, the urban landscape is less able to absorb rainfall. So in a storm there's a greater likelihood of flash flooding in places where there may be little history of flooding, and the run-off is carried to river systems more quickly, which in turn are more likely to burst their banks. Inadequate drainage systems can also be quickly overwhelmed.

In 2017 the Met Office warned that we should expect record rainfall in one UK region within the next few years.

But it doesn't take an extreme weather event to cause a flood. We recently took a claim on a house that was repeatedly flooded due to the construction of a new housing estate nearby. Another claim involved a house that was flooded after heavy but not exceptional rain – because a discarded shopping trolley stuck in the entrance of a storm drain was collecting rubbish.

A common misconception about extreme weather events is that insurers attempt to class them as Acts of God to get out of paying damage claims. This isn't true, and very few insurers even use that term anymore.

Many kinds of storm damage will probably be covered by your home insurance. Our policies cover lightning strikes, high winds bringing down trees and whipping roof tiles off – and even the subsidence that might follow extended periods of dry weather.

If something on your property causes damage to a neighbouring property – slipping roof tiles or perhaps a fallen tree – you're probably liable for the damage. This should be covered by your buildings insurance, though you might have a harder time if there's a question of negligence – for example, your roof tiles were loose before the storm.

If you're a keen gardener, do check that your beloved plants, shrubs and trees covered in the event of a storm. Gardens and their contents aren't always covered by home insurance.

Is my car protected from storm damage?

If your vehicle is damaged by a flood, hail or very strong winds, comprehensive car insurance should protect you.

But even if you avoid storm damage, you could have misfortune passed on to you in the form of a flood-damaged car. If you're buying a used car in the aftermath of a local flood, look out for suspicious low-priced vehicles. Flood-damaged cars can harbour a number of problems that may not be immediately apparent.

As we warned some time ago, insurers go to some lengths to make sure flood-damaged cars don't reach the market, but some slip through. There are a few tips you can follow to help avoid that danger.

If you're concerned about the prospect of flood damage or storm damage, and you're not sure about the cover details of your insurance, give your provider a call and they'll tell you of any exclusions.