Sinkholes in the UK

Sinkholes near your home

Watching the ground open up and swallow your garden shed might sound like a scene from the latest Hollywood blockbuster. But sinkholes are a very real problem across the world.

Less common in the UK, though not unheard of, would you know what to do if a sinkhole suddenly appeared near your home? And more importantly, does your insurance cover you for any damage? 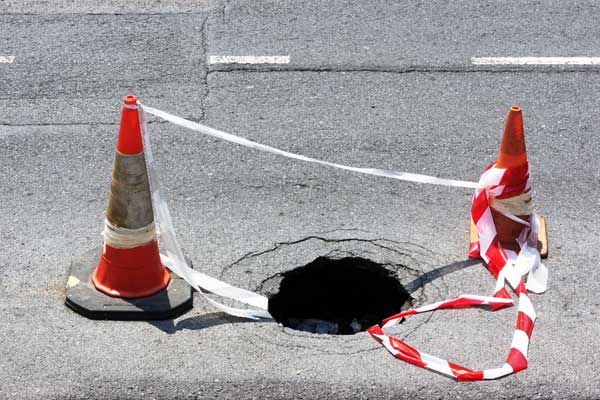 Sinkholes (also known as dolines) are holes or depressions at ground level that usually develop when the soil or rock below are eroded or undermined.

The main types of sinkhole

Sinkholes can come in all sizes, from insignificant dips in the land to huge cavities that can swallow a building.

The signs of a sinkhole

Sinkholes are often caused when rainfall or acidic groundwater dissolves a soluble bedrock such as limestone, gypsum or chalk to form a cavity or cave. The cavity gradually increases in size until the roof collapses, and forms a sinkhole above.

Alternatively, the top of the bedrock can dissolve or develop fissures, creating a cavity underneath the overlying surface material. Depending on the material, it can eventually collapse or slump into the depression.

Some sinkholes are due to human activity in the landscape. Disused mines can collapse, and if sewers or pipes leak underground they can erode the ground underneath the surface over time.

Does my home insurance cover sinkholes?

Sinkholes aren't a problem for most UK homeowners, though if you believe you have one speak to your insurer urgently.

It's a fair assumption that if your house is damaged as a result of a sinkhole, your insurance will cover you for repairs under subsidence or landslip. But if the sinkhole is on the edge of your property and it's not directly affecting your buildings, you may not be covered.

In a 2014 interview for the Guardian, a spokesman for the Association of British Insurers (ABI) said: 'Damage that a sinkhole causes to your property will be covered by buildings insurance. Your buildings policy will not cover repairs needed if there is no damage to your home, such as if a sinkhole appears in your garden.'

What steps can I take if I'm worried about sinkholes?

Here are some things you can do to prepare for the small chance of a sinkhole incident.

Most insurers don't have specific policies on sinkholes. As they're not common in the UK, hopefully you won't ever have to deal with one.

Yet it's always important to protect your house and everything inside. Our buildings insurance will cover you against almost any damage that might happen.