driving in heavy rain and floods

Stay safe on the road when it's wet, wet, wet

What to do in heavy rain, floods and standing water

You’ll probably hear warnings of sea or river-related flooding from the Environment Agency, or on the news, but surface water flooding from heavy rain or drains that can't cope is harder to predict and can be very localised.

If you hear there’s flooding on the way, move your car to higher ground to stop it getting damaged. Water plays havoc with electrics and can even cause airbags to go off suddenly some time later. 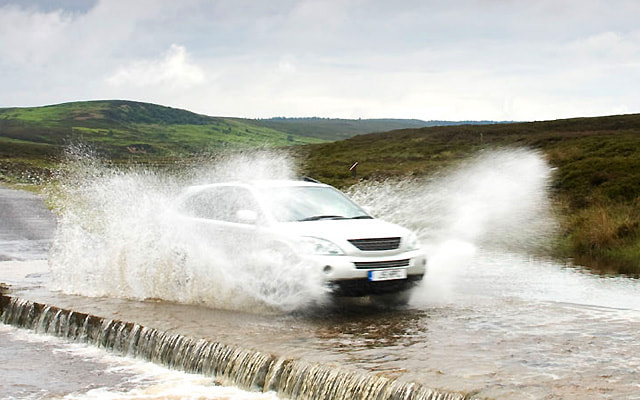 If you do get stuck in flood water, it's usually best to wait in the car and call for help rather than try to get out.

Driving fast through water is dangerous, inconsiderate and can end up being very expensive.

Your tyres can lose contact with the road, causing you to lose steering control – called aquaplaning. If you feel it happening, hold the steering lightly and lift off to slow down gently until your tyres grip again.

At anything above a slow crawl you’ll throw water onto pavements, soaking pedestrians or cyclists. You could be fined and get points on your licence for this.

It only takes an egg cupful of water to be sucked into your engine to wreck it, and on many cars the engine’s air intake is low down at the front.

What to watch out for

Just because the road goes into the river on one side and comes out on the other, that doesn’t mean a ford is safe to cross. The depth and speed of the water changes with the weather.
More on safely fording a river.