Car crashes can be caused by carelessness, dangerous driving and bad habits. Yet many incidents can be avoided if you remain patient and aware of what's around you, as well as observing The Highway Code.

We've highlighted below the most common causes of road accidents, including reckless driving, using your phone, and being drowsy at the wheel. 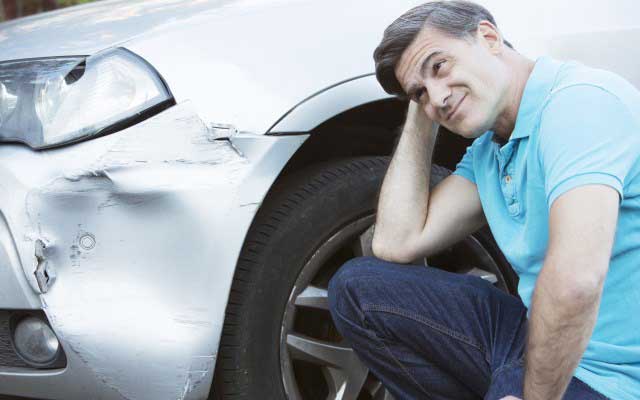 1. Speeding is always a bad idea

Unfortunately, lots of drivers do ignore speed limit signs when rushing to their destination – putting themselves and others in danger. And the faster you drive, the shorter reaction time you have to prevent an accident.

After decades of awareness campaigns, driving too fast for either the road or the driving conditions is still one of the the most common contributory factors in collisions. The Royal Society for the Prevention of Accidents (ROSPA) states that speeding killed almost 400 people in the UK in 2015. Wherever you're heading, it's always safer to stay within the speed limits.

2. Don't get distracted by your phone or food

Since 1 March 2017, holding and using a phone while driving could result in a £200 fine and 6 points added to your licence. And for good reason – text driving is twice as likely to cause a crash as drink driving, due to a driver's reaction times.

Driving while using a phone impairs your driving in many ways:

Be sure to put your phone on silent or 'driving mode' when on the road. If it still distracts you, store it in the glove box. If you need to use it, stop somewhere safe to do so.

Although no specific law makes it illegal to eat and drive, doing so could present a significant danger. And despite the law, you can still be prosecuted for careless driving if not in proper control of the car.

Careful driving isn't just about managing your speed but also about being considerate to other road users. Changing lanes too quickly and erratically on a motorway or dual carriageway can cause other drivers to brake suddenly, possibly resulting in a crash with a vehicle behind them.

Driving too closely to the vehicle in front of you, also known as tailgating, is also very dangerous. If it suddenly brakes, there'll be little time for you to react and this could result in a serious crash.

The police can issue fixed penalty notices for tailgating, while careless driving offences could see you compelled to attend a driving course. But if a case goes to court the maximum penalty is £5,000, 3 to 9 points on your licence, and a discretionary disqualification.

So always follow the two-second rule – keep a minimum of two seconds behind the vehicle in front in order to have a thinking and stopping distance.

4. Look out for all road users

Of course, it's vital that you're always aware of the risks around you. Look ahead for other vehicles and road users – cars, motorbikes or bicycles – and use your car mirrors too. A Department for Transport report released in 2012 showed that 42% of crashes reported to the police involved drivers failing to look properly.

Even getting out of the car can be dangerous, so check behind for an approaching vehicle or cyclist before opening your car door. The Dutch Reach is being promoted as a safer way to exit a vehicle on the road side. To do the Dutch Reach, simply use your hand furthest away from the door to open it – as you swivel look for any oncoming bicycles or traffic as well using the side mirror.

If you can't stay awake, then don't stay behind the wheel. According to police incident records, fatigue is a factor in 2% of all crashes. However, some studies suggest that tiredness is a contributory factor in up to 20% of accidents.

Driving when tired doesn't necessarily mean driving at night. You may just be exhausted, have driven for too long, or you might driving at a time when you might normally be asleep, such as very early in the morning. There are a few precautions you can take to avoid being a tired driver.

6. Don't drive under the influence

Drinking alcohol or taking drugs dramatically reduce your ability to drive, and puts yourself and other road users in danger. So to avoid an accident just remember, if you're driving don't drink, and if you're drinking don't drive.

Unfortunately, even with the best will in the world, accidents happen. A recent AA poll showed that half of AA Members had experienced damage to their vehicle while left in a car park. The least you can do if you hit someone's car is leave a note with an apology and your contact details. But if you are unlucky to have a scrape, having comprehensive car insurance helps when the worst happens.

* Survey of new business sales from theAA.com, March 2022 to May 2022. Prices based on comprehensive cover only.