More than half of young drivers (51%) can’t bring themselves to turn off their mobile phones before driving, according to an AA-Populus poll* of 17,979 for the AA Charitable Trust.

Among the general driving population, one fifth (21%) can’t bear to turn off their phones with the worst offenders living in London or Northern Ireland (25%).

Since 2011 the number of casualties** caused by drivers distracted by their mobile phones has increased by a quarter (24%). In light of this, the AA Charitable Trust and Think! are raising awareness of the dangers of distracted driving with a new ad by adam&eveDDB to be shown in cinemas, video on demand, and online.

From 1 March the fixed penalty for using a handheld mobile phone while driving doubles from £100 to £200 and penalty points from three to six.

According to Transport Research Laboratory (TRL) research, reaction times are twice as long text driving as drink driving*** but despite this there is still a prevalence of high profile court cases of drivers causing death and serious injuries due to texting, calling or searching for music on their mobile phones while driving. 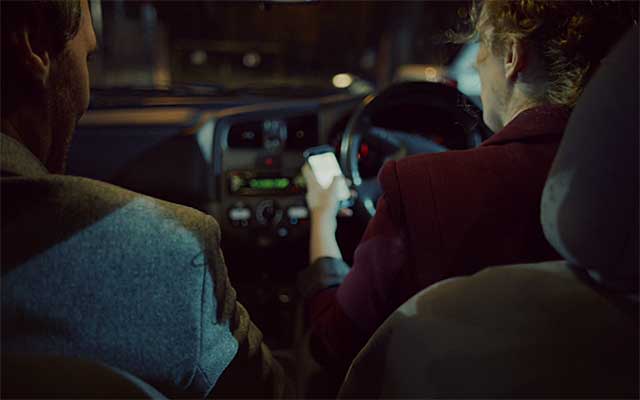 To better understand driver attitudes, the AA Trust has carried out further research**** to highlight the difference in perceived risks associated with drink driving and driving while using a mobile phone.

The ad highlights the danger of texting whilst driving with a narrative that follows a couple leaving a nightclub: the woman, who is the designated driver for her intoxicated boyfriend, starts to reply to a text as they start their journey. The boyfriend notices and suggests they swap places, in a move that makes a bold statement on the dangers of using a mobile phone whilst driving.

The ad plays on the general acceptance of successful drink drive campaigns over the decades, and states,  "You're twice as likely to crash text driving as you are drink driving. You wouldn't drink and drive. Don't text and drive." 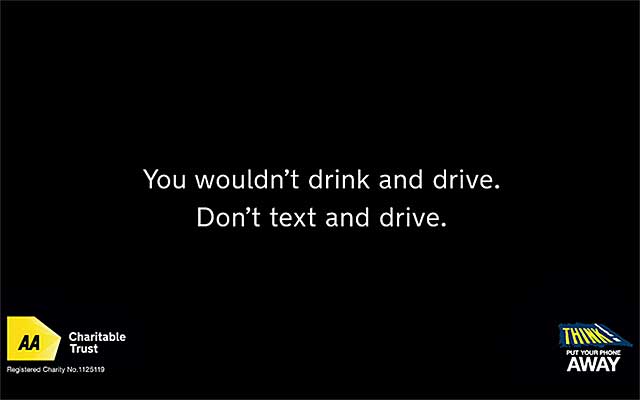 The commercial is supported by the Department for Transport’s Think! Campaign and was directed by James Rouse from Outsider. It launches online on 1 March and will be in cinemas from Friday 3 March.

Transport Secretary Chris Grayling, said: "We are toughening the penalties for reckless drivers who use their handheld mobile phones while driving.

"This video, developed in partnership with the AA Charitable Trust and THINK!, is powerful and thought-provoking and will help deliver the message – using a phone at the wheel is simply unacceptable and can be as dangerous as drink driving."

Adam Pearson, who was badly injured but survived the A34 HGV crash, said: “I am still recovering from injuries sustained in a crash in which I was hit at 50mph by a truck driver who was changing music on his phone. Tragically, four people died in the crash. It is good to know there are individuals and organisations out there tackling the issue.”

Put your phone away

DFT Think! is also launching a sticker campaign to encourage drivers to put their mobiles in the glove compartment by renaming it a phone compartment. The initiative has been supported by driving instructors from the AA and BSM driving schools and the AA Shop will distribute stickers free to on-line customers.

***Transport Research Laboratory (TRL) study “How dangerous is driving with a mobile phone?Benchmarking the impairment to alcohol” by P C Burns, A Parkes, S Burton, R K Smith (TRL Limited) and D Burch. The research found that the reaction time of texting drivers is 2.8 times more than those on the drink-drive limit. For using a hand-held phone, the reaction time is 3.5 times more than those at the drink-drive limit.