This simple car door opening method can save lives

It might have an unusual-sounding name, but the Dutch Reach is a car safety technique that could help to save the lives of cyclists.

Each year, over 700 cyclists are injured and 2 are killed by car doors, according to government stats. But the Dutch Reach could help prevent this.

Read on to find out what it is, where the name came from and how it could make Britain’s roads safer for cars and cyclists. 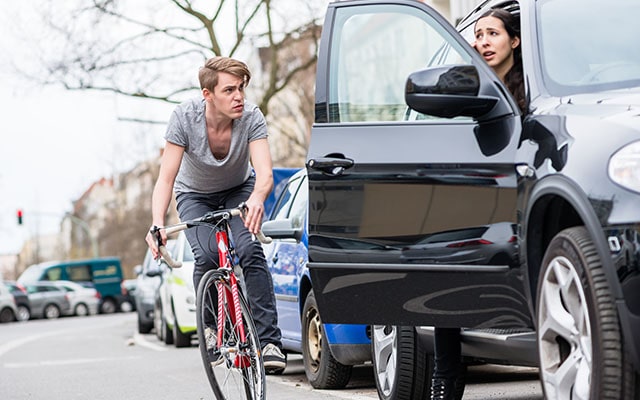 What is the Dutch Reach?

The Dutch Reach is a safety technique for motorists that’s been in use in the Netherlands since at least the 1970s.

Its aim is to stop cyclists (and pedestrians) from being hit by car doors as they pass parked cars.

The method involves opening the car door from the inside with the hand furthest from the handle. That gives you a chance to check your mirrors and blind spot for passing people or cars.


How do you do the Dutch Reach?

To do the Dutch Reach, just open your car door from the inside with the hand that’s furthest from the door handle.

You can do it whether you’re a driver or a passenger in a car.

This sets off a chain of 5 key steps in looking out for bicycles:

By using the opposite hand, it forces you to turn your body and check behind you. It also allows you to check your rear-view and wing mirrors as you swivel.

Once you’ve checked your blind spot, you can make sure there is no approaching cyclist that you might hit with the car door.


Why should you open a car door with your further hand?

Opening your car door from the inside with your further hand is called the Dutch Reach.

It helps to make sure that you turn your body and look behind you into your blind spot before you open the door.

That way, you should avoid opening your door onto an approaching cyclist - a crime known as ‘dooring’ a cyclist.

Making a simple change to how you open a car door can have a big impact on the safety of those on two wheels.


We teach all our AA and BSM driving instructors the technique who then pass this onto their pupils.

By the Government putting it in the Highway Code, we hope more drivers will adopt it too. 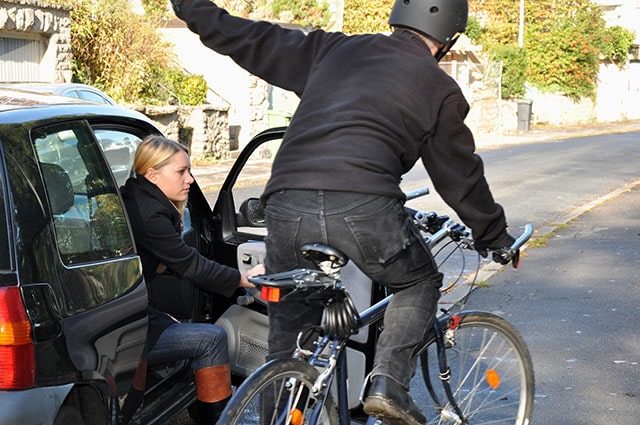 What is ‘car dooring’ a cyclist?

‘Dooring’ a cyclist is when a motorist in a parked car opens their car door into the path of an approaching cyclist without looking.

This causes the cyclist to hit the door or swerve dangerously, which could injure or even kill them.

Then Transport Secretary Chris Grayling made the offence well-known when he ‘doored’ a cyclist in 2016.

Each year, 2 people in the UK die from ‘dooring’ and more than 700 are injured, according to government statistics.

The Department for Transport released figures which showed between 2011 and 2015, a total of 8 people died and 3,108 were injured by dooring incidents.


How far should a car be from a bicycle?

Cars are always advised to allow cyclists plenty of room. And when a bicycle cycles past a parked car, it’s best to leave more than a car-door length of room between the bike and the car.

If you’re a cyclist, leaving plenty of space between you and the parked car will stop you from being hit by a car door or having to swerve dangerously to avoid a car door.


Do you have to do the Dutch Reach?

You don’t have to use the Dutch Reach method, but it’s a very good idea.

In cities in the Netherlands, like Amsterdam and Copenhagen, they have some of the safest roads in the world for cyclists.

If the UK adopts the technique, it could help bring our road safety inline with high European standards.

Our AA Driving School tutors already teach the Dutch Reach to learner drivers. But after increased awareness, it may also be added into the Highway Code in 2020.


What does the law say?

Rule 239 of the Highway Code says “you MUST ensure you do not hit anyone when you open your door. Check for cyclists or other traffic.”

However, the Highway Code entry isn’t a law. But The Road Vehicles (Construction and Use) Regulations 1986 contains a law which says “No person shall open, or cause or permit to be opened, any door of a vehicle on a road so as to injure or endanger any person".

You could endanger or injure a cyclist if they’re forced to swerve dangerously, are involved in a collision or are killed as a result. It applies whether you’re a driver or a passenger.

The offence can be punished by a fine of up to £1,000 but no penalty points can be added to the offender’s licence.

1Populus received 17,961 responses from AA members to its online poll between 15 to 22 October 2019. Populus is a member of the British Polling Society and abides by its rules.