Call for a new 'slow down, move over' rule

Following the death of three roadside technicians in 12 months, the AA and other breakdown organisations, have joined forces to call for enhanced motorway safety rules to protect road users as well as recovery patrols.

Following several serious incidents affecting their vehicle recovery staff, including the death of an RAC roadside technician and two other recovery drivers, we have written to Road Safety Minister Jesse Norman calling for the introduction of a 'slow down, move over' rule when drivers pass a broken-down vehicle or a recovery vehicle with flashing amber beacons.

Within the letter the breakdown organisations say; “we have strengthened our resolve to work together to do all that we can to prevent similar incidents in the future.”

The AA has previously written to Mr Norman suggesting changes to the Highway Code ahead of the new rules implemented in July which enabled learner drivers to have lessons on motorways, but these recommendations were not adopted.

As well as changes to the Highway Code, breakdown organisations have called on the Department for Transport to sponsor a THINK! road safety campaign highlighting the dangers faced by patrols and members of the public broken-down at the roadside.

Since the beginning of the year, all breakdown organisations in the UK have experienced numerous cases where patrols have nearly been hit by a passing vehicle while attending a breakdown. 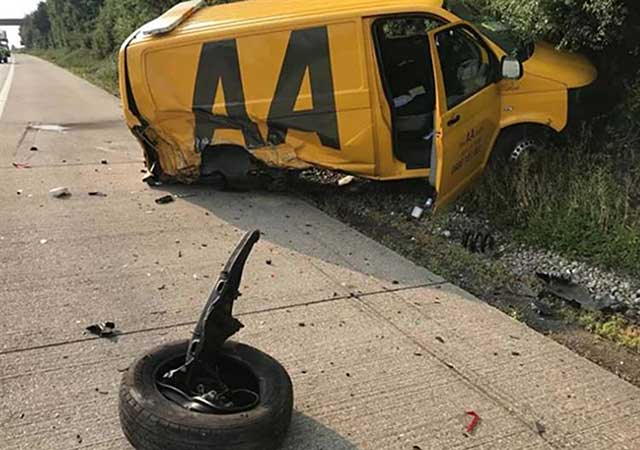 Edmund King, AA president says; “Standing at the side of a motorway is a frightening experience, but our patrols rescue stranded motorists daily in all weathers. Unfortunately their safety is being compromised by some who drive too fast and too close.

Standing at the side of a motorway is a frightening experience, but our patrols rescue stranded motorists daily in all weathers. Unfortunately their safety is being compromised by some who drive too fast and too close

“Between our organisations we have seen too many near misses and too many fatalities caused by this problem. That needs to change quickly.

“Slow down, move over is not a difficult request, but this simple act of kindness will make a world of difference to vulnerable drivers, patrols and road workers alike.”