As if the risk of cars hitting deer and other animals at this time of year isn’t enough, AA Patrols are sharing their ‘tails’ from the roadside after a Member reported hundreds of pounds of damage caused by wildlife meddling with cars in a residential area.

It’s not uncommon to hear of rodents chewing through car and home cables to build nests and even squirrels stashing winter food in engines – but one AA Member has reported that mischievous foxes are now messing with neighbourhood vehicles. 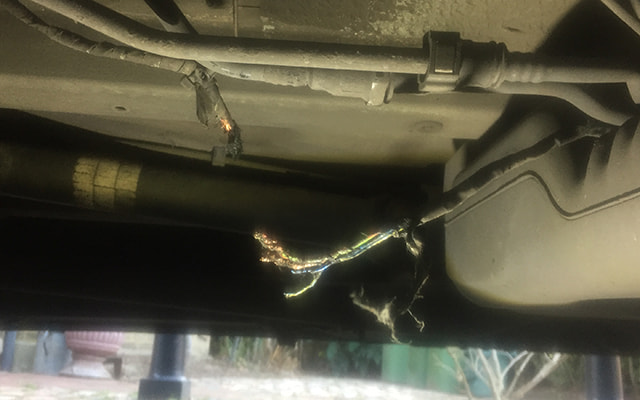 Hundreds of pounds worth of damage

Helen Powell, from Aldershot, Hampshire, suffered hundreds of pounds worth of damage to her car in just two weeks after foxes repeatedly chewed through the wiring.

Ms Powell said: “The dashboard was lit up like a Christmas tree. They’d taken out the ABS, lane departure warning and start-stop system.

The dashboard was lit up like a Christmas tree. They’d taken out the ABS, lane departure warning and start-stop system

“They caused £300 damage the first time, which I had repaired. They then did it again to the same wires the following week and I’m expecting the bill to be much the same.”

And Helen’s not alone, as the bright eyed and bushy tailed vandals have targeted other vehicles in the area. She added: “My neighbour has a van which he uses for work and he’s had around £2,000 worth of damage done to it in five or six weeks.

Sat on the bonnet relieving itself

“There’s a growing family of urban foxes on the street which are very, very tame. We even witnessed one sat on the bonnet, relieving itself on the windscreen!”

Animal attacks on cars are common in parts of Europe, where Pine Martens have been known to invade engines and bite through hoses. But even in the UK, insurance claims for wiring ‘damaged or eaten’ by animals is not unheard of.

George Flinton, AA Patrol of the Year, said: “Many people enjoy seeing our four-legged friends out and about and they don’t normally pose a threat, but it gets problematic - and potentially expensive - if a curious fox gets its teeth into a car’s wiring.

“It’s usually mice and rats that like wires and fuel pipes, but if you share your neighbourhood with a family of foxes, consider parking in a secure garage if you can, or use a car cover overnight. You can also buy approved fox repellent from garden centres if they’re really causing trouble or ultrasonic sound generators that foxes hate but people can’t hear.

“Keep an eye out for any warning lights that remain illuminated on the dashboard after you have started the car and check the vehicle handbook if you’re unsure.”

Drivers can also get more information on warning lights or report a breakdown using the AA app, which is free to members.

Tales from the road: AA Patrols share their stories

I was fixing a vehicle’s wiring and the offender was watching me. It’s very common in London!

We encounter a lot of rodent damage to vehicles round this way. It is mostly caused by rats and mice. Generally, they are looking for somewhere warm and dry to hole up for the winter. They tend to nibble at the wiring and use the material for bedding

Why do animals target vehicles?

There seems to be something about the taste or texture of the materials they go for and it’s not just cars – animals have of course been known to chew through household wiring as well. It has been suggested that they may be attracted by the smell of some materials used in wire casings and that it could be related to increased use of recycled or recyclable materials - but this is not confirmed. It’s also possible that rodents are attracted by the warmth of the engine or smell of food left inside the car, and simply choose it as a place to nest.

Will car insurance cover this type of damage?

Yes, car insurance will pay out for damage – but you will still have to pay any excess and will probably lose your no claims bonus, so it’s only worthwhile making a claim if the damage is extensive enough to justify it.

What can I do to stop or at least deter it?

Try to park in a garage overnight if you have access to one or if not, use a certified repellent. Movement triggered electronic (Ultrasonic) devices are available that might help.