One Honda Jazz. 844 miles. A world record to beat…

Brim the tank with just under 9 gallons of petrol at Land’s End and hope to get to John O’Groats – 844 miles distant – on that single tank of petrol and establish a world fuel economy record by beating the previous 71mpg record for the route.

That was the challenge BBC transport correspondent Paul Clifton, along with Honda research engineer Fergal McGrath, took on over the weekend of 3-4 June.

Providing the official adjudication and vital support for the record attempt over the weekend of 3-4 June, were AA Patrol of the Year John Snowling and AA Recovery Patrol of the Year Tony Doran, in John’s van, registration number 999 AA. 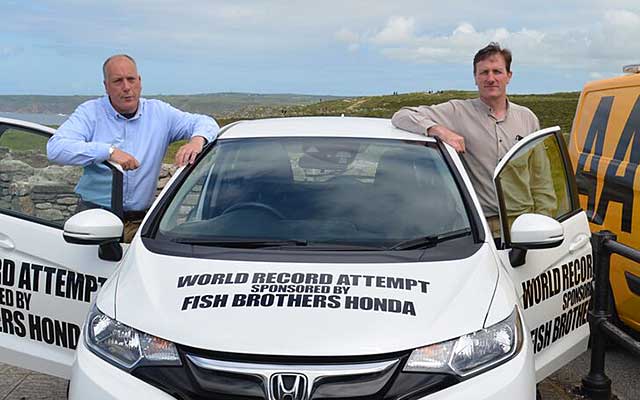 John comments: “On paper, this was a tough call given that the Jazz doesn’t have a very large fuel tank and claims an official fuel economy of 56mpg so that would have to be beaten by a pretty huge margin!”

As the little convoy was waved off by the Mayor of St Just, it was expected that the Jazz might not get much further than Stirling before needing a fill-up.  But having managed 80mpg through the ups and downs of Cornwall and Devon, hopes were high.

A sweet spot at 40mph

According to Paul, the car’s ‘sweet spot’ is about 40mph and, with the AA van following behind, amber warning lights flashing to provide protection from faster traffic, the crew member not driving used a Go-Pro to add to the footage for a BBC broadcast.

“We set off at 2 in the afternoon so we could pass the traffic hotspots of Birmingham, Manchester and Glasgow during the night when it was quiet,” Tony explained.  “That way we could keep going without fuel-consuming stops and starts.”

The Scottish border came and went having passed over the gruelling climb of Shap on the M6, followed by Beattock.  In fact, the climbs on the route work out to about one and a half times the height of Everest.

Down to the last gallon with 124 miles to go

“We passed Stirling without needing a fill-up but when we reached Inverness it was a different story,” John added.  “The computer on the Jazz warned that the car was down to its last gallon, with 124 miles still to go and plenty more stiff climbs to conquer!

“I can tell you that we really felt the apprehension building up so it must have been excruciating for Paul and Fergal.  We were certain that we would have rescue them with the jerry can!”

Then the car warned that there was no fuel left with 60 miles remaining but the brave little Jazz carried on.  Was it running on fresh air and adrenaline?

“The tension became almost unbearable as the final miles clocked down.  Then there was just one mile to go, and that, thankfully, was downhill!” joked Tony.

“But amazingly the engine was still running as we pulled into the filling station and general store at John O’Groats, the delightful lady who owns it opening specially, as it was a Sunday.

They had done it.  On just one tank of fuel

John brimmed the tank and then got out his calculator.

He stared at the result before bursting into laughter.  “94 miles to the gallon!  One tank! 844 miles! Get in there!!”

He showed the number to the camera to prove it.  An almost unbelievable result.

A demonstration that petrol can be a match for diesel

Paul Clifton says that the objective was to demonstrate that while diesel is being demonised by the government, leading to a fall in sales of new diesel cars, it is possible to show that a mid-size petrol engine, with its lower emissions, can be a match for more efficient diesel.

John concludes: “We parked the van and the car under the famous signpost for the obligatory photos and reflected on the toughness of the challenge.

“The journey took 26 hours and with only short stops for refreshments and to change drivers.  The tension turned into a massive buzz as it seemed that we really would reach John O’Groats without having to fill up.  Subject to official Guinness Book of Records confirmation, we’ve absolutely smashed the previous petrol car record!”

As a post-script, John’s van – which fully laden with all of its kit, weighs about 3.2 tonnes, itself returned a fuel consumption of about 52mpg – compared with the usual 30mpg of a normal working day.  But it is a diesel…