Pride of the North

Two AA patrols from Yorkshire are celebrating after bringing home the AA’s highest accolade for its roadside patrols across the country. 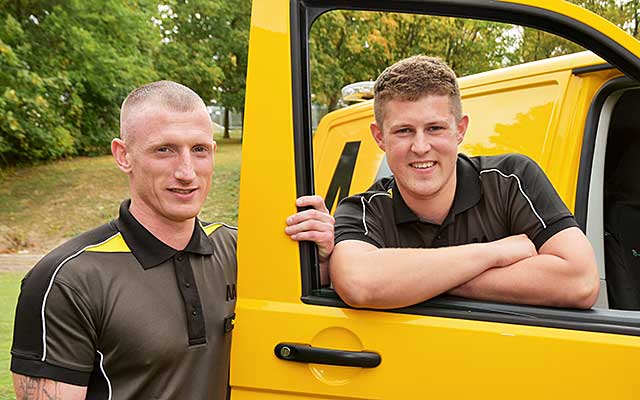 George and Chris rescue drivers across the North of England. In their new roles, they will spend the next 12 months as public ambassadors for the AA, representing the UK’s biggest motoring organisation within the motor industry and before the media.

Both joined the AA around three-and-a-half years ago. In this time, George has worked on all manner of vehicles; the most memorable being a ‘Back to the Future’ DeLorean. And he’s thought up some creative solutions for difficult breakdowns, including rescuing a member from the middle of the North Yorkshire Moors by building ramps and bridges out of rocks to safely drive the vehicle to the nearest road.

Happy to be shortlisted

George said: “I couldn’t believe it when my name was read out. I was happy to be shortlisted for AA Patrol of the Year but to win is surreal, it still hasn’t really sunk in. I’m looking forward to the year ahead!”

I was happy to be shortlisted for AA patrol of the year but to win is surreal, it still hasn’t really sunk in. I’m looking forward to the year ahead!

Chris is the third Yorkshire-based winner to be crowned AA ‘Recovery Patrol of the Year’ in four years and the second consecutive Leeds-based winner, upholding the excellent record of AA recovery patrols in the area.

Having previously spent ten years in the army, Chris has not been afraid to go above and beyond to assist others since joining the AA. As well as his full-time role, he also helps to train new recovery patrols in the area and once helped an off-duty police officer restrain a drunk driver at the roadside during the early hours of the morning.

Chris says: “I enjoy the open road, going to new places around the UK and meeting members and colleagues. When I was told I was the regional finalist for Recovery Patrol of the Year I was absolutely amazed and really chuffed.

“When they read my name out on the night I couldn’t believe it. It doesn’t seem real – my partner was shaking and I couldn’t stop laughing. I’m really excited to represent the AA over the coming year.”

Judging began in July and involved a series of intensive technical and driving tests as well as a panel interview and mock radio interviews at the AA’s head office in Basingstoke.

Outside of work, both George and Chris enjoy mountain biking; with George having been placed 10th in the national under-18’s Cross Country Mountain Biking championship.

David Brambell, Director of Roadside Operations at the AA, says: “George and Chris typify the values which set AA patrols apart. Their awards are true testament to their characters; their outstanding service and professionalism are some of the qualities that make them our top AA patrols and truly deserving of this accolade.”

George and Chris typify the values which set AA patrols apart. Their awards are true testament to their characters

The AA awards 2018 were held on 8 September at the Sofitel Hotel, London Heathrow Airport.

The AA Patrol of the Year award started in 1987 to recognise the service and dedication of its more than 2,000 patrols at the roadside.