Whether in the UK or Europe, family road trips needn’t be a pain – our car games will help prevent boredom and bickering enroute

Fed up with Frozen? Sick of antisocial video games? It’s time to go back to basics and reboot in-car entertainment with something that involves the whole family. How many of these car games do you know?

A memory-based alphabet game that requires you to pay close attention to both what you and those around you say. One player starts off with the line “I went to a picnic and brought…” followed by an object beginning with ‘A’. The next player has to repeat all that went before and end with an item beginning with ‘B’. For creativity purposes, and to avoid any motorway squabbles, you can allow for connecting words to reach your target letter – so a ‘bag of peanuts’ would get you to ‘P’.

A broader version of this is the ‘shopping list’ car game – same principle but ‘I went shopping and bought…’ which widely expands the potential for crazy, imaginative and random items. One person starts by saying a word – it can be just about anything – then go round clockwise and each person has to come up with a word that has some connection to the previous word. For example, child one says ‘grass’, child two says ‘leaf’, child three says ‘tree’, parent one follows this with ‘squirrel’ and parent 2 might follow this with ‘nuts’. Quick-thinking is the key – the faster paced the more fun the game.

If you were thinking the colour yellow was involved in this game, you’d be right. Points are awarded to whoever spots a vehicle with all or part of it in yellow. Add to the fun by awarding different points for specific cars, trucks, lorries, jeeps and even taxis.

Better for A-roads and B-roads than motorways, and for UK driving rather than road trips in Europe. The aim of this game is to spot pubs along your car trip, and successfully count how many arms and legs are in each name, with a maximum score of 6 runs. Any time you spot the words arms or head though, you’re out and the next batter is up. The Horse and Jockey, for example, would be a 6 combined legs and 2 arms giving you a maximum score of 6 and out! The King George would score 4 (2 arms and 2 legs) and The Coach and Horses would score 12 (Two horses and one driver equals 10 legs and 2 arms). Make it a team game if you like. Spotting The Beehive is an automatic win. Who said maths couldn’t be fun?

A good musical ear is necessary here because humming is the name of the game. From classic rock to the latest pop, everybody has a favourite song they just can’t get out of their heads. There are plenty of tunes to hum from, so you shouldn’t run out of ideas. For the extra competitive, you could even add bonus points for naming the year the song was written and what album it was from.

Traffic jams – we all get stuck in them, and there’s no situation more likely to make everyone restless. So try this little game of nosy neighbours. Everyone chooses a window and takes a quick peek at the person in the car nearest to them. No need to stare! Decide what sort of person they are... give them a name, a voice and a job, decide where they’ve come from or where they’re heading. Make the game a secret spy mission... tell your kids that the aim is not to be caught looking by their chosen target. If they do, their turn is automatically over.

This is a great game for inspiring creativity rather than competitiveness. Kids love making up stories and this game should really spark their imaginations. Everyone chooses a passing car and memorises the last three letters of the number plate. Now make up a story using the letters as inspiration. Use the first letter to decide the name of the main character, the second letter could be an item or an animal in the story, and the third letter can provide inspiration for what the character’s doing. If you’re driving through Europe, get the kids to look out for and keep a tally of plates from different countries.

This one takes a little prep before you set off… make a list (or a picture card for younger children) of things you might see on your journey. For example, sheep, a church, cows, an AA van, a horse, a car transporter, a tractor, a pink car, a Red Lion Pub, a fire engine, a deer, a Robin Reliant, an Eddie Stobart lorry, a castle, motorway services, etc. Children simply cross off their score cards as they spot each item. Make the list more exotic and give it a European flavour if you’re driving through France, Spain, Holland or Germany… include windmills, tandem bicycles, limos, unusual campervans, posh cars, goats, a field of tulips, or even the sun, for example.

All you need for this car game is a stereo (and a sense of rhythm). Stick on a song which everyone knows, start singing along - then turn the volume down for 10 seconds. Carry on singing even without the tune to guide you! Turn the volume back up, and see how you're all getting on. Are you perfectly in time, or are you all over the show? The winner is the person who was able to keep the beat going and is perfectly in time when the music starts playing again.

This is a firm family favourite - even celebs are getting in on the act. Presenter and mum Stacey Solomon partnered with us to play the 'Never Miss A Beat' game with her two boys. The family sang along to Proud Mary by Tina Turner – the same song that appears in our current TV advert. As you can see, the super-talented family had a great time rocking out in their car - and they kept the beat going like pros!

Last but by no means least, this game is great for any budding detectives in the car. By the powers of deduction and a little clever questioning, discover the name of the correct person, place or thing and make it your turn. Not only is this game a hit with all ages, but it can take quite a while to get through – which makes it even better for motorway play. 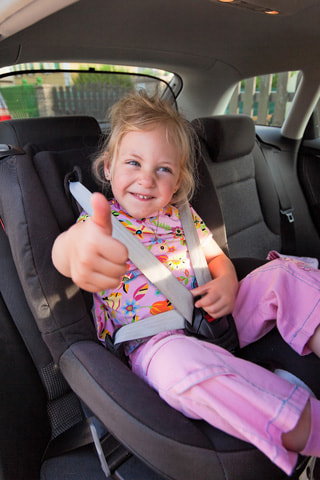