Paying to drive in central London

The London Congestion Charge Scheme affects vehicles used in Central London on weekdays. Transport for London (TfL) runs it and it was introduced on the 17 February 2003.

You pay the charge for the day, and can drive within the charging zone as often as you want within the day.

An additional emissions surcharge (also known as a toxicity charge or the‘T-charge') will apply from 23 October this year to petrol and diesel vehicles that don't meet the Euro 4 emissions standard. 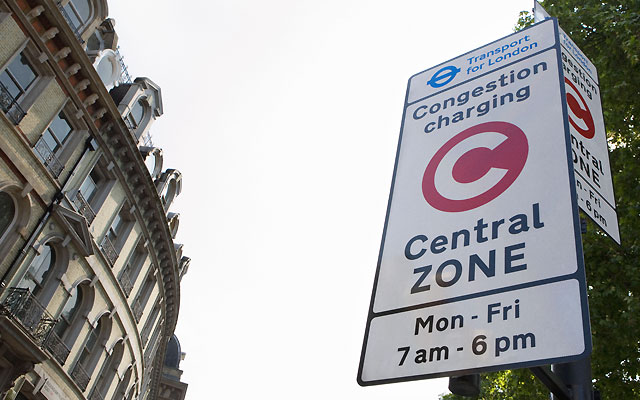 How does the congestion charge work?

Who has to pay?

You'll have to pay if you're responsible for a car, van or lorry using the zone.

There are some exemptions and discounts for example, disabled people who have a blue badge and motorcycles.

Some of those eligible for discounts and exemptions must pre-register even though they pay nothing.

Have the cameras recorded your plate?

If you've driven into the Congestion Charging zone there's no way to find out if your vehicle's number plate was recorded or not, other than wait to see if you get a letter or fine through the post.

What if you get a penalty?

If you don't pay the Congestion Charge within the time limit (before midnight the following charging day) you’ll receive a penalty charge notice of £130, reduced to £65 if paid within 14 days.

Congestion charging penalties are civil matters and are in effect debts. If you consider yourself not guilty or a mistake has been made:

After a three-month consultation the Mayor of London confirmed the following changes to the Congestion Charge scheme.

The penalty charge increased from £120 to £130 bringing it in line with other moving traffic, bus lane and parking penalty charges within London.

Following a 10-week consultation the following changes were confirmed: