Paying to use the Dartford Crossing bridge or tunnel

Remote payment only now – no toll booths or barriers

To the East of London, the M25 crosses the river Thames at the Dartford-Thurrock river crossing. 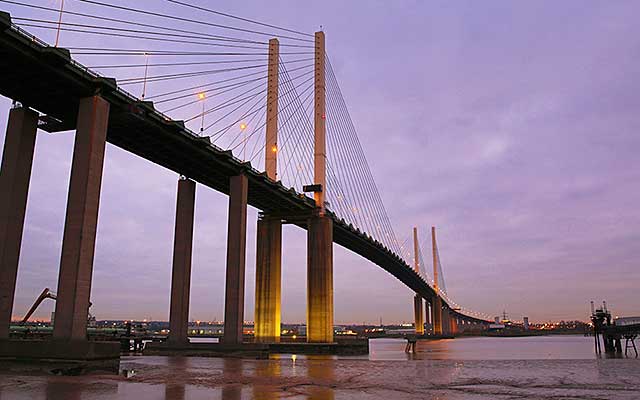 Dartford crossing carries around 160,000 vehicles a day and is a frequent cause of congestion and delay.

You can pay in advance if you know you’re going to use the crossing, or by midnight the following day if your crossing was unplanned or you forgot to pay in advance.

You can make one-off payments:

When the free flow scheme was introduced, the official impact assessment estimated overall payment rates of 93% for UK drivers and 86% for foreign registered vehicles, expected to make up around 3% of all vehicles using the crossing.

If you don’t pay, expect a penalty charge notice of £35 (if paid within 14 days) plus the original road user charge).  Penalties for non-UK-registered vehicles are issued via a European debt recovery agency.

The M25 at Dartford is a strategic national road and is also part of the trans-European road network – as such it has to be expected that many drivers won’t know about Dart Charge, the penalties for non-payment, operating hours or have the luxury of timing their journeys to coincide with the non-charging hours. The AA expressed concerns about this to the Highways Agency.

This is one of the most important motorways in Europe and it needs more capacity, not easier ways to pay

Responding to the increase in charges in October 2012, we said that long distance travellers from UK and Europe, freight, business and regional users have all been sold down the river through the unnecessary perpetuation of charges and a lack of investment in future capacity at Dartford.