How to get to Glastonbury 2019

Each year, 135,000 revellers travel to Glastonbury. And every year, around 400 people have car troubles in the festival’s car parks.

That’s why our yellow vans and lovely mechanics have been a feature of Glastonbury since it began in 1970, as the event’s official partners.

Read on for our top tips on driving to Glastonbury, covering everything from how to get there to your festival checklist. 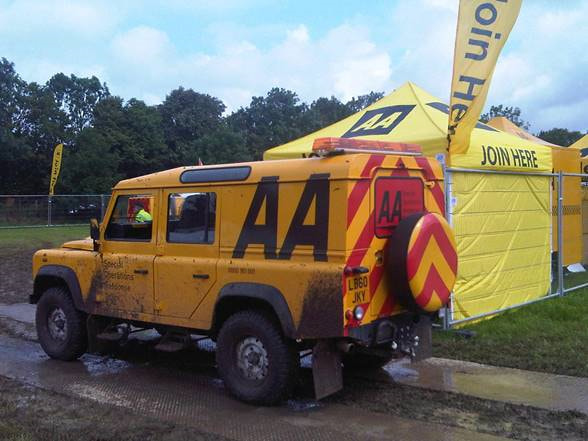 We’ll be on-hand to help out with breakdowns, lost keys and stuck-in-the-mud dramas, making sure that nothing but the weather can rain on your parade.

Our staff will be in East 9, off Purple Route, and at Bronze Gate in West 32 throughout the week. Our dedicated Key Assist vehicles will be on site from Saturday.

How to get there

If you’re wondering where the Glastonbury festival is held, you’re not alone. Despite rumours of the festival site moving a few years ago, Glastonbury this year will be in the same place as always.

The festival is in the village of Pilton, Somerset. It’s near to its namesake town of Glastonbury and to the town of Shepton Mallet.

Use your sat nav to get close, then follow the official AA signs once you see them

The postal address postcode isn’t the best to use if you’re driving to Glastonbury. Use the postcodes below to get you close to the site and then follow the festival signs to the right car park. 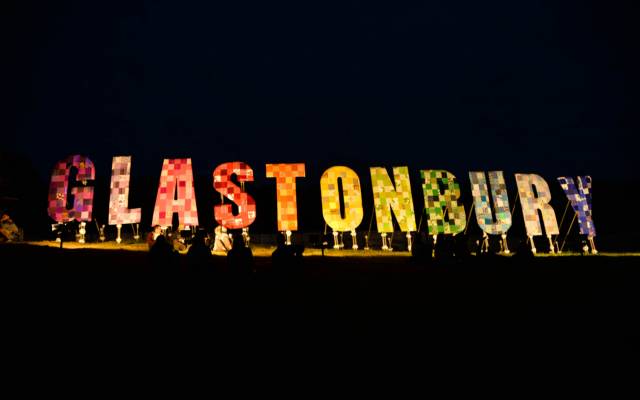 How to get to Glastonbury

Looking for the best way to drive to Glastonbury? Our Route Planner can help you plan the perfect journey, with live traffic updates to keep you informed.

The festival’s official suggested routes are:

Some of the most popular routes to travel to the festival are:

Bristol is just over 20 miles distance from the Glastonbury festival site. Drivers should follow the A4 to the A37 and the A371.

Bath is only 20 miles from the Glastonbury festival. From Bath to Glastonbury, follow the A367 to the A37.

Another option for getting to the Glastonbury festival is to park and ride at the private Ashcombe Park facility just off the A361. For this option, use the postcode BA6 8NB in your sat nav.

If you’re taking a campervan or caravan to Glastonbury, remember that you'll be in a different campsite and so your route may not be the same as if you were driving in a car.

You'll need to have a separate campervan or caravan permit as well as your festival pass. Depending on the size of your vehicle, you’ll be in one of the following Glastonbury caravan sites, so make sure you check your ticket: Why travel by car?

Wondering how to get to Glastonbury? There are plenty of ways to travel, including by coach which will take you door-to-door and is environmentally friendly.

But if you don’t live near one of the official coach stops or you need more flexibility, driving is a good option. You can fit more into your car than you could carry on public transport and you can re-enter the car park any time during the festival to pick up supplies (just remember not to leave valuables in your car).

There is plenty of parking at Glastonbury and the site is set up for drivers, so don’t let queues put you off. It’s very well organised and there are lots of people there to help you – including us.

What's the cheapest way to get to Glastonbury?

The price of a coach ticket varies by route, but the average price is £61 according to the Metro. In some cases, driving could be more cost-effective.

If you’re an AA Member with breakdown cover, you can get some great discounts with our Member Benefits scheme. You can stop to refuel - and keep your energy levels up during the drive - with 20% off at Moto Services.

How to off-set your carbon footprint

Worried about being environmentally unfriendly by driving to Glastonbury? If you need to take your car rather than public transport, here's how to help the environment and reduce your carbon footprint at the festival: Before you set off

Make sure you check for updates on the Glastonbury website before you go, as well as the latest traffic news.

Are you travelling right now? Check for live Glastonbury festival traffic on our Traffic News tool, including queues and road closures.

How to avoid a breakdown at Glastonbury Festival

Don't get stuck in the mud

Glastonbury’s not known for dry weather, and every year countless cars get stuck in the mud. Four AA technicians in mud-busting Land Rovers will be on hand to help if you do find yourself going nowhere fast.

A few tips could prevent you getting stuck: take it easy with the right foot; try pulling away in second gear to reduce wheel spin, and, if you do get stuck, place some cardboard or car mats in front of the driving wheels to help regain traction.

Glastonbury checklist – get your car ready

Get your car festival-ready with our handy Glastonbury checklist. Make sure your car is in top condition before you set off so that you can avoid a breakdown on the way or at the festival. 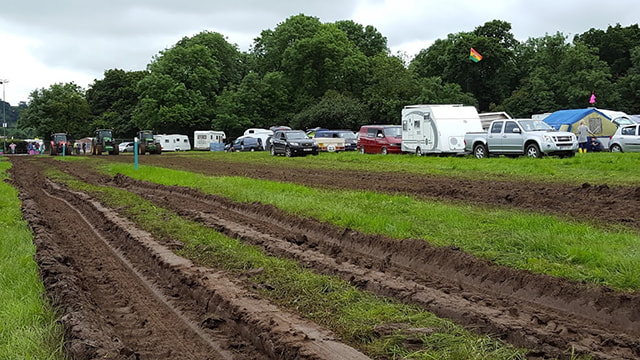 A Glastonbury car park pass can be purchased for £45 and gives you access to all the parking sites.

Where to park at Glastonbury

Your ticket doesn’t designate a car park, so whether you park on the East side or the West side will be influenced by where you want to camp.

People who park on the East side of the site usually have the shortest queues at the pedestrian gates and the shortest queues getting out on Monday. At peak times, the A39 queue to get into car parks takes several hours. It typically takes less than an hour for those travelling on the A37.

The best time to arrive by car

Wondering how many people go to Glastonbury? Ticket sales are around 135,000, and thousands of people try to arrive on the opening day of Wednesday.

That means it’ll be incredibly busy trying to get into the festival, so pick your arrival time carefully. 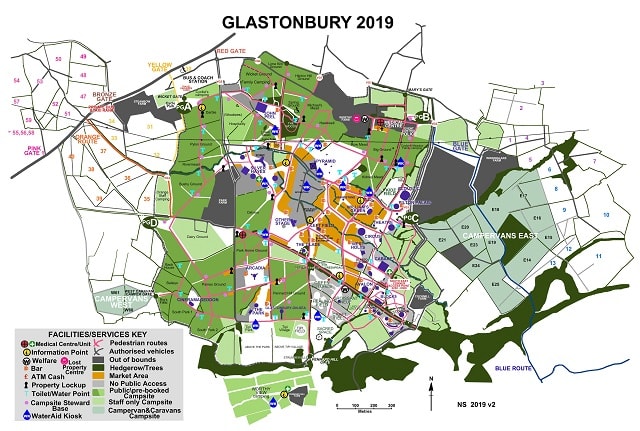 At the Glastonbury festival site, there are 4 main entrances for cars, depending upon where you come in from.

If you're able to, use the Blue Route (from the A303, then the A37), where there's more parking space and shorter queues to get in and out of the site.

We'll be managing 10 charging points located inside Bronze Gate after the taxi rank on the right hand side. We'll monitor the cars and move them around to free up charging points, and keep your keys safe until you return.

Getting home from Glastonbury

Getting back from the festival can be as tricky as arriving there. However you decide to beat the crowds, the most important thing is that you're safe to drive. Don’t take any risks with drink, drugs or tiredness. Other things to do in Glastonbury

Why not beat an early retreat from the festival site on Monday, and then check into a hotel in the town of Glastonbury? Extending your festival holiday for a day (or more) will make the most of having the car with you. You'll be able to relax, shower and get a good night's sleep before driving home when the roads are quieter.

There are plenty of places to see in Glastonbury and the surrounding area. Take your time and you'll be able to fit in some sightseeing on your journey home.

Places to see in Glastonbury

There are plenty of places to explore in the town.

Places to visit near Glastonbury

On the Tuesday or Wednesday after Glastonbury, why not visit these nearby attractions on your way home? The roads will be clear and you can take advantage of having the car with you.