Some myths get passed around so much they become confused with fact. We’ve all heard the likes of “swallowed chewing gum stays in your system for 7 years” and “we only use 10% of our brains.”

Driving has its fair share of myths too, so we've taken a look at the most common ones, to separate what's good advice and what's gibberish. 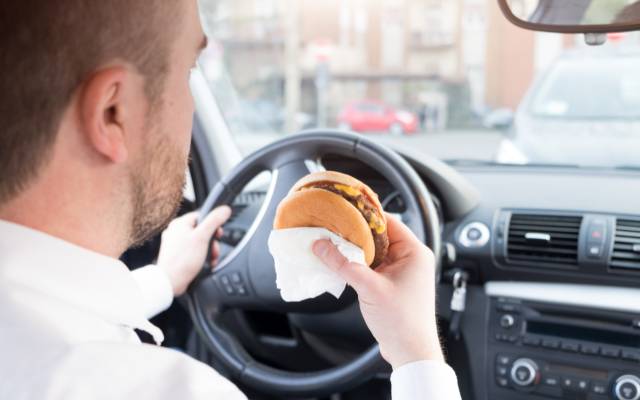 What does the Highway Code say?

We're here to clear up the debate over what's legal and illegal for drivers to do. The most important thing to remember when you're on the road is that you must obey the Highway Code. Rule 148 of the Highway Code states that safe driving and riding needs concentration, so all distractions should be avoided.

There might not be specific laws forbidding certain actions and behaviours, but it's strongly recommended that you avoid doing anything that could slow your reaction times and cause an otherwise avoidable accident.

Is it true I can drive 10% over the speed limit without breaking the law?

In theory, you break the law if you drive even 1mph over the speed limit. But you won’t get a ticket because speedometers aren’t always 100% accurate, so police allow for this. Plus, it’s not safe to drive with your eyes glued to the speedo. AA President Edmund King advises that it’s better to keep your eyes on the road.

The National Police Chief’s Council recommends only giving a speeding ticket if you top the limit by 10% plus 2. So that would mean driving 35mph in a 30mph zone. However, this is up to individual police officers to decide, so there’s no guarantee they’ll let you off.

The best way to make sure you don’t get caught by a police officer or speed camera is to drive carefully and try to stick to the limit.

How many drinks can I have and still drive?

When it comes to the drink driving limit, our stance is: if you’re driving, don’t drink at all.

How much you can drink and still be safe to drive varies for each person, so there is no fixed answer. Factors including your weight, metabolism, gender, and what you’ve had to eat contribute to how you process alcohol. That means it’s impossible to say that, for example, 2 glasses of wine is how much you’re allowed.

Attempting to drive while above the legal limit can get you 6 months in prison, an unlimited fine and a driving ban. So it’s better to just not risk it and avoid a drink if you’re the designated driver.

Read more on drink driving laws in the UK.

Is it illegal for a passenger to drink alcohol?

No, but just because you can drink as a car passenger, it doesn’t necessarily mean you should. After all, it’s not just the driver's responsibility - passengers can help with safer driving too.

If you're supervising a learner driver, the same legal responsibilities apply to you. So you can't use your phone or be under the influence even though you're not doing the actual driving yourself.

Can I have open bottles or cans of alcohol in a car?

There’s no law against having an open can or bottle in the car, but it's not recommended to drive around with a backseat full of open beers.

If you’re pulled over and you’ve got a car full of open bottles of booze, you could be breathalysed to make sure you haven’t been drinking.

Will sucking a penny fool a breathalyser?

Chewing on garlic, citrus or mints won't trick the breathalyser, either. Just don't drink and drive.

Should I drink soft drinks and coffee while driving?

Just like with eating, there’s no law against drinking a soft drink while driving, if you aren’t distracted by it. So, if you’re driving with a hot coffee cup, keep the lid on. Any sudden spills could be enough to cause you to lose control of the car and you could end up with a careless driving fine - as well as a burnt lap.

If your coffee spill causes you to get in a serious accident, you could be prosecuted for causing death by careless driving. You could be banned from driving, handed an unlimited fine, or given a prison sentence of up to 5 years.

Drinking other soft drinks is also fine as long as you keep your attention firmly on the road. It’s actually recommended that you drink water before driving and keep hydrated throughout a long drive. Not drinking enough water can have the same effect on you as drink driving.

Is it illegal to eat and drive?

No, there's no specific law against eating while driving. You're not going to be immediately pulled over if you’re seen taking a bite out of your breakfast on the way to work - unless that bite stops you paying attention to the task at hand.

Our Populus poll in December 2018 found that 1 in 10 of us eat while we drive. If you do, make sure your eating habits don't distract you behind the wheel. If the police think you aren't in proper control, you can be charged with careless driving. This carries a maximum penalty of £5,000, 3 to 9 points on your licence and a discretionary driving disqualification.

You’ll also need to consider stopping distances. Because eating makes your reactions slower, you should wait until you’re parked up or stationary to take a bite. This is especially true if you’re driving in bad weather, as stopping distances increase on wet road surfaces.

Is it legal to smoke and drive?

It’s illegal to smoke in any private vehicle with anyone under 18 present and in company vehicles or vans. If you use your own private vehicle for business occasionally, you're allowed to smoke in it. If the car has been given to you by your work for the purpose of work, you can't.

It’s not against the law to smoke in the car in any other circumstances, but the Highway Code specifically lists smoking as a distraction that can land you with a careless driving charge.

Read our full advice about smoking and driving.

Driving barefoot – is it really against the law?

Driving without shoes isn’t illegal, contrary to what many people believe. When choosing which shoes you drive in, you need to be able to operate the pedals safely without your footwear - or lack of - making it difficult.

Is driving in flip flops illegal?

Rule 97 of the Highway Code makes it clear that drivers must have "footwear and clothing which does not prevent (them) using the controls in the correct manner." So while it's not illegal to drive in flip flops, it's suggested you drive in a more sensible shoe. Flip flops can come off easier, or end up slipping under the pedals and getting stuck.

Is it legal to drive with the interior light on?

It’s very possible that at some point as a child your parents told you that turning the car's inside lights on while driving was a crime. It’s something which lots of people think is a fact but there’s no law against driving with your interior lights on. But at night it can be distracting or interfere with your vision by reflecting off of the inside of the windscreen.

If you’re pulled over and it’s decided that your light was a probable cause in any bad driving, you can expect to get a careless driving charge though.

Is it illegal to go around a roundabout 3 times?

No, it isn’t. Roundabouts aren't always the easiest to navigate so don't worry about missing your exit the first time. But you should plan your route in advance so you don't end up circling unnecessarily, as this could be considered careless driving.

Can fuzzy dice fail my MOT?

Yes, they actually can. Obstruction of more than 4cm could land you with a failed MOT. But realistically you’ll probably be told by your mechanic to remove the dice before the MOT takes place.