Do British drivers know what to do if they break down on a motorway?

And what car checks do Brits do to avoid a breakdown?

Whether a vehicle breaks down on the motorway or a few miles from home, it can be a distressing experience.

In a recent survey1, we asked drivers about their experiences of car breakdowns and what checks they do to prevent one.


How many vehicle breakdowns are there in the UK?

The greatest number of breakdowns tend to occur during the winter months, with the AA attending:

We asked people about their breakdown experiences, what checks they do to prevent one and, crucially, whether they know where to stand if they break down on a motorway.


Who's most likely to have experienced a vehicle break down?

80% of survey respondents had broken down at least once, with 16% experiencing 5 or more breakdowns.

Those aged 55 to 64 were most likely to have experienced 5 or more breakdowns, with 19% of respondents in this age group stating this.

This is most likely due to younger people having spent less time driving.

24% of people in the north-east of England hadn’t experienced any breakdowns, with 23% in Scotland saying the same.

The greatest proportion of drivers who’d experienced 5 or more breakdowns were based in London, with one fifth of respondents from the capital stating this.


Do drivers know what to do if they break down on the motorway?

Motorways can be a dangerous and stressful place to break down. That's why it's important to call for help as soon as possible and wait in the right place until assistance arrives.

As part of the survey, we asked people to highlight where they would stand if they broke down on a motorway, both one with a continuous hard shoulder and one with an Emergency Refuge Area (ERA).

Generally the safest place to wait if you’ve broken down on a motorway is behind the barrier and diagonally behind your vehicle (position 1 shown in the images below).

For both types of motorway, around 4 out of 10 people agreed that this was where they’d stand.

This means around 60% of people didn't know the correct place to stand if they broke down on a motorway.

The majority of respondents did agree that, for both types of motorway, you should get behind the barrier if possible, with only a very small number stating they would stay in the car, or on the hard shoulder or ERA.

But over a fifth of people thought it was best to stand diagonally in front of their vehicle (position 3 on the images below).

This is a dangerous place to stand before a professional arrives to manage the scene, as it’s where a car's likely to be thrown if someone crashes into it. 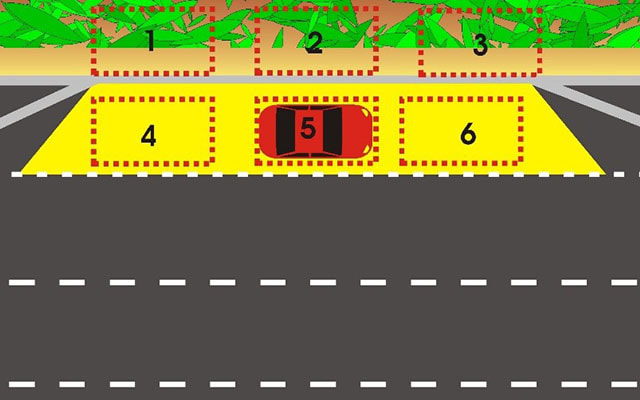 Sean Sidley, Patrol of the Year 2022, said: "Breaking down on a motorway can be a very stressful experience. But it's important not to panic.

"If you've stopped in the hard shoulder or an ERA, turn on your hazard lights, get out of the vehicle on the passenger side (if it's safe to do so), get behind the barrier and call us so we can help. Remember to stay upstream of oncoming traffic.

"But if you have mobility issues and would struggle to get to the passenger side or behind the barrier, it's normally best to stay in the car.

"When you contact us to report your breakdown, let us know if you've stayed in your vehicle so one of our Patrols can assist you as soon as possible.

"The recovery agent, police or highways officer may ask you to wait in a different location once they arrive and you should do as instructed, as they're re actively managing the scene."

Read our article on what to do if you break down on a motorway.


What causes people to break down?

Almost 4 out of 10 respondents said their breakdown was due to a flat battery, making this the most likely reason. This was followed by an engine that wouldn’t start (31%) and a flat tyre (29%).

Just less than a fifth said they broke down due to a warning light, while 14% blamed overheating.

Over 10% of people had broken down as a result of a collision, which can be especially distressing for all those involved.

Sean said: “If you’ve broken down following a collision with another vehicle and no one was hurt, you should make sure to find out the owner’s contact details and take a note of the vehicle’s registration details. It might also be useful to take a photo if you can.

“If you break down following a collision, we can help. And Members can access our complimentary 24/7 Accident Assist service, so we’ll handle your insurance claim no matter who your insurer is.”

If your car battery's dead, get a new one quickly and easily with Battery Assist.

Get a car battery

What car checks do people do to help avoid a breakdown?

Only 5% of people admitted to not carrying out regular checks on their vehicle, though younger people were slightly less likely to perform checks, with 8% of those in the 18 to 24 and 25 to 34 age groups admitting to this.

The most common checks performed regularly were on fuel levels (86%), followed by tyre condition and pressure (81%) and oil levels (78%).

This means around a fifth of people don’t check tyres or oil levels, despite these being important maintenance checks.

Almost two thirds of respondents said they checked engine coolant levels while over half checked the headlights.

Only 31% of people said they checked the battery status, meaning over two thirds of people don't check their battery even though it’s the most common cause of a breakdown.

It can be tricky to check battery status, particularly for older vehicles. Modern and high end cars tend to have a dashboard notification that alerts drivers when they may have battery issues so they can address them.

Sean commented: "A flat battery is the most common cause of breakdowns and is often a result of people leaving the lights or radio on.

"I’d advise people to always double check that they have switched everything off when the engine isn’t running, to avoid draining the battery.

"This is particularly important during winter as battery performance can be affected by the cold weather.


What can people do to prevent a break down?

There are lots of basic car checks you can do to keep an eye on your vehicle. And a regular car service will help to keep your car in good condition.

You should also aim to get your car serviced at least every 12 months or 10,000 miles according to Sean.

"A regular service allows mechanics to identify any potential issues before they become so problematic, they cause you to break down.

"And if you notice anything unusual about your vehicle that causes you concern, you’re best to take it to a garage to get it looked at.

"This means an expert can diagnose and fix the problem before it causes you to break down while driving."

Of course, some vehicle breakdowns are unavoidable and that’s why our team of expert Patrols are on hand to help if you do break down.

We'll get you back on the road.