Electric cars to accelerate past diesels by 2030

Drivers believe that electric cars will outnumber diesel cars on UK roads by 2030, according to a survey by the AA.

More than 12,500 drivers said that by the time the ban on new petrol and diesel comes into force, electric cars would form a fifth of all cars on the road (19%1). Petrol vehicles would still be the most common fuel type, but would only account for 30% of cars.

Drivers also predict a boom in hybrid technology, as well as alternative fuels, such as hydrogen and bio-diesel.

This latest prediction from drivers will be welcome news for the Government who announced the sales ban of new petrol and diesel vehicles was brought forward from 2040 to 2030.

Manufacturers will also be pleased to see considerable consumer faith in EVs. Throughout 2020, new EV sales skyrocketed with 108,205 cars being sold2. It will also help reinforce the decision made by Jaguar Land Rover earlier this week, who announced that Jaguar will become an all-electric brand by 2025 while Land Rover will trial other zero emission fuels in the UK like hydrogen3. 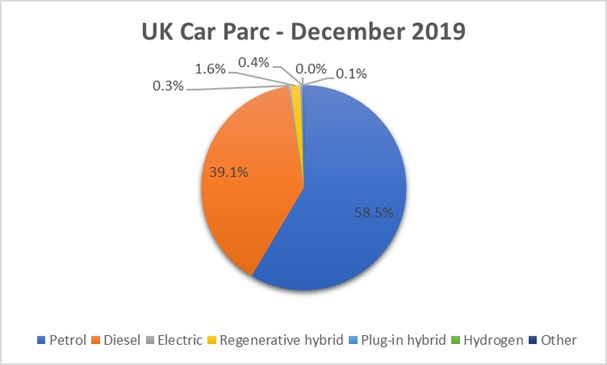 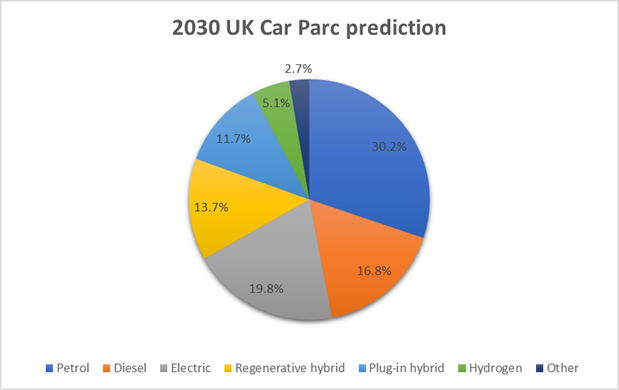 If approximately 33 million cars4 remain on UK roads between now and 2030, the new Car Parc would mean a boom of electric cars from 91,000 to 6.5 million.

Over the next nine years, electric cars could supercharge the way we drive

Meanwhile, pure combustion vehicles would see a dramatic drop of 16.6 million cars. Should these predictions prove correct then manufacturers will need to ensure they can fulfil the oncoming demand.

Edmund King, AA president, says; “Over the next nine years, electric cars could supercharge the way we drive. There is clearly a desire from drivers to own them. EVs will play a significant role in the future.

“Everything is working in favour of electric cars. The range of a single charge in constantly improving, the purchase and leasing prices are becoming more affordable, more models and styles are reaching the market and investments in chargepoints are being made.

“Electric vehicle technology has the ability to unlock much more than greener motoring; providing the chance to create new jobs and opportunities. More should be done to spark the EV revolution, such as scrapping the VAT on electric cars costing less than £50,0005 and the construction of numerous gigafactories.”

1. Yonder received 12,977 responses from AA members to its online poll between 8th - 14th December 2020. Yonder is a member of the British Polling Council and abides by its rules.